Arts & Culture in Canada. This Canada Day, We Need a New Citizenship Oath. Canada Offers an Apology for Native Students’ Abuse. OTTAWA  The government of Canada formally apologized on Wednesday to Native Canadians for forcing about 150,000 native children into government-financed residential schools where many suffered physical and sexual abuse. 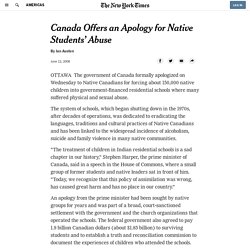 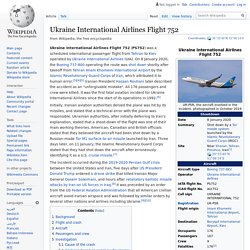 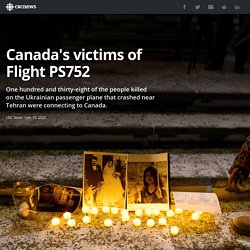 Could ‘Megxit’ Be a Royal Fairy Tale for Canada? Rumors that Canada, which features Prince Harry’s grandmother, Queen Elizabeth, on its coinage and its $20 bills, was their preferred refuge from Britain were stoked this week after the couple’s statement announcing their plans conspicuously mentioned “North America” rather than the United States. 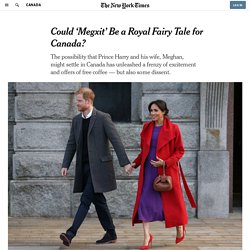 Also, a Toronto-based digital firm designed their website explaining their plans. And after the announcement, the duchess returned to Canada, according to the BBC, where she had reportedly left their 8-month old baby, Archie, after spending Christmas and New Year’s Day in British Columbia. During their recent six-week vacation, the couple enchanted local residents on Vancouver Island by interrupting a hike to gallantly help a couple trying to take a selfie, according to local news reports. Iran plane crash: Why were so many Canadians on board? Image copyright Anadolu Agency via Getty Images Ukraine International Airlines flight PS752 crashed shortly after taking off from the Iranian capital Tehran on Wednesday, killing all 176 passengers and crew members on board. 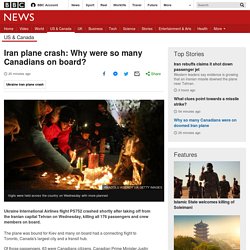 The plane was bound for Kiev and many on board had a connecting flight to Toronto, Canada's largest city and a transit hub. Of those passengers, 63 were Canadians citizens. Canadian Prime Minister Justin Trudeau has said that, all told, 138 people on that flight were en route to Canada. Trump's hit on Soleimani exposed a lot of uncomfortable truths. Following Sunday’s vote in the Iraqi parliament seeking the expulsion of American forces from the country, the multinational NATO-led mission in Iraq headed by a senior Canadian commander now figures prominently among the military and geopolitical applecarts suddenly overturned by the Trump administration’s obliteration of Iran’s global terror commander Qassem Soleimani last Friday. 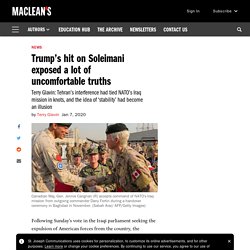 Or so the story goes. Not widely noticed is that the NATO military training and institution-building mission was already facing a looming crisis, and a dead end. Canada offers to help with probe into Ukrainian plane crash in Iran that killed 63 Canadians. Canada is offering to help with the investigation into the Ukraine International Airlines plane crash that killed everyone aboard, including reports of 63 Canadians, minutes after takeoff Wednesday morning. 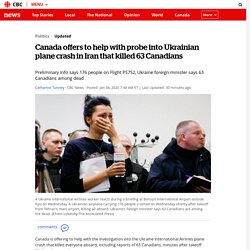 "We are in touch with our international counterparts and Canada is offering technical assistance to the upcoming investigation," said Transport Minister Marc Garneau in a statement. The airline said in a statement that preliminary information suggests there were 176 people on Flight PS752 — 167 passengers and nine crew. Ukraine's foreign minister says 63 Canadians are among the dead. Foreign Affairs Minister François-Philippe Champagne says he's already been in contact with his Ukrainian counterpart "Tragic news regarding Ukraine International Airlines Flight 752.

"I have been in touch with the government of Ukraine. Ukrainian Foreign Affairs Minister Vadym Prystaiko said 82 Iranians and 11 Ukrainians were also aboard the plane, along with Swedish, Afghan, British and German nationals. Iranian-Canadian man on day trip upset by questions at U.S. border. VANCOUVER -- Sam Sadr's first trip to the United States from his home in North Vancouver was supposed to be a relaxing getaway but he says his birth in Iran made him a target at the border, where he was detained for over eight hours with his family. 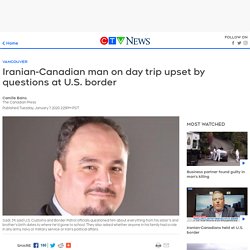 Sadr, 39, said U.S. Customs and Border Patrol officials questioned him about everything from his sister's and brother's birth dates to where he'd gone to school. B.C. is taking advantage of international students by doubling their MSP fees, advocate says. Doubling health insurance fees is the latest example of nickel-and-diming international post-secondary students, who already pay more for their studies than their domestic counterparts, the B.C. 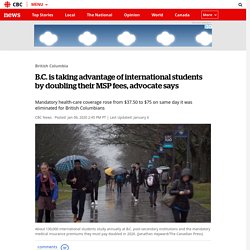 Federation of Students said Monday. Medical Service Plan (MSP) premiums increased for international students from $37.50 per month to $75 per month on Jan. 1 — the same date the fees were eliminated for British Columbians. According to the province, more than 130,000 international students study in B.C. every year. Tanysha Klassen, the chair of the student federation, says the MSP increase will be a hardship for many of them.

Klassen said the common image of the wealthy foreign student living in a brand new apartment and driving a sports car is not an accurate reflection of the whole group. Akil Thomas scores winner as Canada beats Russia for gold at world juniors. OSTRAVA, CZECH REPUBLIC -- Canada is golden again at the world junior hockey championship. 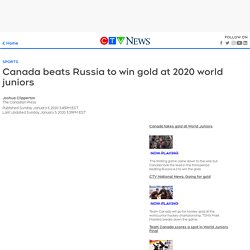 15 Canadian Icons Who Stole Our Hearts In 2019. 'All about the money': How women travelling to Canada to give birth could strain the health-care system. Women travelling to Canada to give birth to babies who will automatically become Canadian citizens are prompting concerns about the strain they may be putting on the health-care system, The Fifth Estate has found. Canada is one of fewer than three dozen countries that follow the practice of citizenship based on birthplace, regardless of parents' nationality or status. At one British Columbia hospital with a high concentration of such deliveries, complaints have arisen that the influx of these non-resident patients — also known as birth tourists — has led to compromised care for local mothers-to-be and struggles for nursing staff.

Some of these patients fail to pay hospital and doctors bills, leaving taxpayers and individual care providers on the hook. "Most of them, they get the Canadian passport, and then they leave the country," said Dr. Kids Help Phone. Kids Help Phone (French: Jeunesse, J’écoute) is a Canadian charitable organization that provides 24/7 free confidential professional online and telephone counselling and volunteer-led, text-based support in English and French to youth across Canada. Kids Help Phone also provides information on how to access community support services for youth.[1] Since May 16, 1989 the organisation has provided counselling to youth via a toll-free number. The service received its one millionth call in 1993, and the organisation launched its anonymous online counselling system in 2002.[2] In 2010, Kids Help Phone partnered with Sandra Hanington and Eric Windeler to create "The Jack Project @ Kids Help Phone" (re-branded to Jack.org in 2013) to develop programs and workshops specifically targeted at young people.

With their assistance, Kids Help Phone was able to create an online chat service and mobile app to reach the current tech literate generation[3]. Boredom (film) 2012 Canadian satirical documentary film. London McDonald’s one of two Canadian stores piloting plastic-free packaging. Eric A. Havelock. British classical philologist (1903–1988) Eric Havelock, while at Yale Eric Alfred Havelock (; 3 June 1903 – 4 April 1988) was a British classicist who spent most of his life in Canada and the United States. He was a professor at the University of Toronto and was active in the Canadian socialist movement during the 1930s.

In the 1960s and 1970s, he served as chair of the classics departments at both Harvard and Yale. Although he was trained in the turn-of-the-20th-century Oxbridge tradition of classical studies, which saw Greek intellectual history as an unbroken chain of related ideas, Havelock broke radically with his own teachers and proposed an entirely new model for understanding the classical world, based on a sharp division between literature of the 6th and 5th centuries BC on the one hand, and that of the 4th on the other. Education and early academic career[edit] Woodward's. Simply Nailogical: The Canadian YouTube star with a day job at the federal government. Caroline Dhavernas. Canadian actress Early life[edit] Career[edit] Keith Morrison.

'Renoviction' rates soar due to big-city housing crunch. North by Northwest with Sheryl MacKay. Take Back Our Roads.

Canadian Musicians. Tai Asks Why. WireTap (radio program) Canadian radio show. Leslie Nielsen. Canadian actor Leslie William Nielsen OC (11 February 1926 – 28 November 2010) was a Canadian actor, comedian, and producer.[1][2] He appeared in more than 100 films and 150 television programs, portraying more than 220 characters.[3] Euthanasia in Canada. Healthcare in Canada. Overview of healthcare In common with many other developed countries, Canada is experiencing a cost increase due to a demographic shift towards an older population, with more retirees and fewer people of working age.

In 2017, the Canadian Institute for Health Information reported that healthcare spending reached $242 billion, or 11.5 percent of Canada's gross domestic product (GDP) for that year.[13] Canada's per capita spending ranks it among the most expensive health-care systems in the OECD.[14] Canada has performed close to, or above the average on the majority of OECD health indicators since the early 2000s.[15] In 2017 Canada ranked above the average on OECD indicators for wait-times and access to care, with average scores for quality of care and use of resources.[16]