Is Google autocomplete evil? The way Google finishes our sentences during internet searches is corrupting our thoughts, says Tom Chatfield. 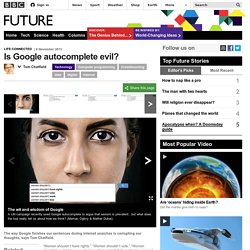 Lexicon Valley sur Twitter : "The baest bae to ever bae? @janesolomon on how the uses of "bae" have expanded. It’s a digital world, but the writing is not on the wall for the handwritten note. Rummaging through my mother’s collection of postcards while helping her move house recently, I found one with the following note scribbled on it: “Keep this. 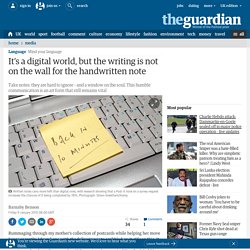 It is beautiful.” Who could ignore such an earnest instruction? Emoticon of the Year: Why we should recognize yearly emoji and emoticons, not just words of the year. Gretchen McCulloch You've heard about the words of the year—Oxford's vape, Merriam-Webster's culture, and Dictionary.com's exposure, to name a few.

And perhaps you're even eagerly awaiting the American Dialect Society's own WOTY vote, which will take place this coming weekend (I'll be live-tweeting from it!). But in 2014 we didn't just communicate with words—we also typed, texted, and tweeted to each other using another set of meaningful (though not pronounceable) symbols.

So here's why we should declare an Emoticon of the Year, every year. Let's start with why lexicographers and publishers declare words of the year in the first place. Even more useful, however, is looking back through the archives of previous years' words. So do emoticons, like words, exhibit trends or become dated? Terry Moore: Why is 'x' the unknown? As Phones Expand, So Does the Word 'Phablet - WSJ. Mobile phone 'text-speak' boosts children's language skills. Over the last decade, the number of pupils taking GCSEs in French – the most popular language – has more than halved from 304,500 to a record low of just 135,600. 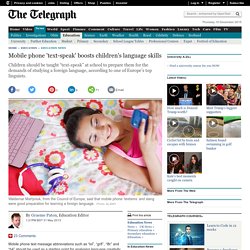 German entries also plummeted from 120,700 to 54,600. The decline followed a Labour decision to make languages optional for 14-year-olds for the first time in 2004. In an interview with the Times Educational Supplement, Dr Martyniuk said that teachers should be more creative with English before encouraging children to move on to foreign languages. “Teachers should start with the English that pupils are bringing into their school, looking at their dialects and how they are different to those used at school,” he said. Texting a "Linguistic Miracle," Says Columbia Professor John McWhorter - Liz Gannes - Mobile. Calling the choppy language of text messaging a scourge on society would not be controversial. 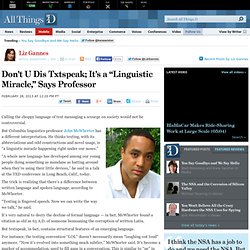 But Columbia linguistics professor John McWhorter has a different interpretation. He thinks texting, with its abbreviations and odd constructions and novel usage, is “a linguistic miracle happening right under our noses.” “A whole new language has developed among our young people doing something as mundane as batting around when they’re using their little devices,” he said in a talk at the TED conference in Long Beach, Calif., today.

The trick is realizing that there’s a difference between written language and spoken language, according to McWhorter. Google searches expose racial bias, says study of names. 4 February 2013Last updated at 08:19 ET Prof Sweeney said technology could be used to counteract racial intolerance A study of Google searches has found "significant discrimination" in advert results depending on the perceived race of names searched for. 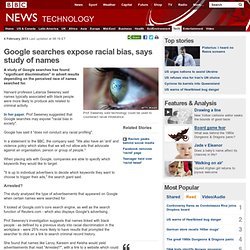 Harvard professor Latanya Sweeney said names typically associated with black people were more likely to produce ads related to criminal activity. In her paper, Prof Sweeney suggested that Google searches may expose "racial bias in society". Google has said it "does not conduct any racial profiling". Hotmail: why I've lived with the shame for 15 years. My name is Michael and I'm a Hotmail user. 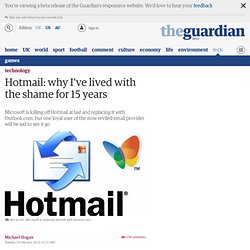 Phew, am I glad to get that off my chest. I'll just wait for the ripple of supportive applause from my fellow sufferers to subside before continuing … Decoding Your E-Mail Personality. Is it OK to phone or email somebody in the next room? A new survey indicates that 45% of Britons are willing to admit they have used their mobile – or even email – to communicate with someone who is in the next room. 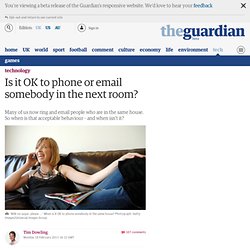 The gradual acceptance of habits that were once considered unforgivable requires continual updating of the relevant etiquette. Obviously procedures will evolve over time, but here are some basic rules of engagement to get started. It is OK to ring someone who is in another room in the same house provided that person is:a) Not answering your shrieks.b) At least one flight of stairs below or above you.c) Refusing to respond to repeated Facebook updates, or direct tweets. The rise of over-familiar websites. 28 January 2013Last updated at 09:57 GMT From social networks to the websites of venerable High Street stalwarts, over-familiarity has spread like the plague across the internet, says Colm O'Regan. 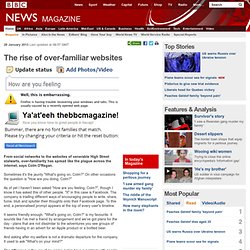 From lonely hearts to electronic dating. 14 February 2013Last updated at 08:16 ET Some of us are lucky, we just stumble across the one we are going to share our lives with. 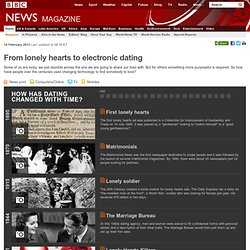 But for others something more purposeful is required. So how have people over the centuries used changing technology to find somebody to love? Continue reading the main story News print Computers/Online TV Mobiles. Is tech transforming language? Texting and social media are often bemoaned as the downfall of the written word – the low standards of grammar and spelling, say many critics, are evidence that English is going to pot. But is that true? Ben Zimmer, a linguist at Vocabulary.com and language columnist for The Wall Street Journal, argues that most fears about digital discourse are exaggerated.

For starters, ‘proper’ language has always been mangled and remixed by its users in daily life. The main difference now is that it’s much more visible, because so many people are publishing their discourse online. What’s more, new styles and genres of communication are developing thanks to the way we are connected digitally. So, for a linguist like Zimmer, it’s an "exhilarating time”. Ben Zimmer spoke to BBC Future at SXSW Interactive in Austin Texas. Additional footage and stills: Vocabulary.com, Shutterstock, Jeff Turner/Flickr/CC BY 2.0. Hashtag inventor: It was an 'accidental trip over a simple idea' Dan Pallotta: Just Call Someone Already. Text messaging turns 20. Long ago, back before Twitter, way before Facebook, in a time when people still lifted a receiver to make a call and telephone boxes graced streets where people didn't lock their doors, Neil Papworth, a software programmer from Reading, sent an early festive greeting to a mate.

"Since mobile phones didn't yet have keyboards, I typed the message out on a PC. It read 'Merry Christmas' and I sent it to Richard Jarvis of Vodafone, who was enjoying his office Christmas party at the time," said Papworth. On 3 December 1992, he had sent the world's first text message. Text messaging turns 20 tomorrow. Carol Ann Duffy: 'Poems are a form of texting' The poet laureate, Carol Ann Duffy, is launching a poetry competition for secondary school pupils. Photograph: Christopher Furlong/Getty Images Hardly a week goes by without a warning about how educationally detrimental it is for children to spend hours of every day screen-gazing and message-sending.

But now there's a note of dissent – from the poet laureate, no less, who says she believes texting is an ideal springboard to good poetry-writing. That Mitchell & Webb Look - Text Kisses. The joy of x in texts, tweets and emails. It is women for whom the slightest wobble in sign-off tone can signal so much. Photograph: Alamy I'm pretty loose with my 'x's. Most emails, every text, descend into a quiet cacophony of mwahs, that gentle smack of lip on tooth. XOXO Marks the Spot : Candlepower. Last December The Atlantic magazine reported on "a tic that's come to plague professional correspondence, especially among women": the use of xo (or xoxo or xoxoxoxo) in email signoffs. The abbreviation itself isn't new — for more than a century, X and O have represented a kiss and a hug, respectively.

Kisses and Hugs in the Office - Jessica Bennett and Rachel Simmons. Why Drag It Out? - Jen Doll. My Jennaration 'xoxo': the new 'Kind Regards' Txtng Rules - Lingua Franca. Two weeks ago I gave a talk to a group of University of Michigan at Ann Arbor undergraduates called “Txtng and the Future of English.” As a linguist who studies the history of the English language, I reassured the students that they are not ruining the English language, no matter what they hear from their parents or teachers or other trustworthy and concerned authorities.

Some of the students looked gratified by this alternate perspective; others looked skeptical. The changes in written English—and to a lesser extent spoken English—caused by texting and other electronically mediated communication (EMC) strike me as more interesting than worrisome. History of the Predictive Text Swearing. Texting Isn't Writing, It's Fingered Speech. Keep your emoticons in check. Every day I get about 120 emails, four texts, and six messages on Facebook. Sometimes I feel a bit overwhelmed by all the technology that sits in between me and the people I'm trying to reach. I imagine Professor Scott Fahlman struggling with the same feeling almost exactly 30 years ago when he suggested that the computer science department of Carnegie Mellon University adopt emoticons on its online bulletin board. New Study Uncovers If Texting Actually Affects Grammar.

Language and technology. Introduction This guide is written for students who are following GCE Advanced level (AS and A2) syllabuses in English Language. This resource may also be of general interest to language students on university degree courses, trainee teachers and anyone with a general interest in language science. The impact of technology on the English language. Crystal What are future exciting dev in language. Technology shortens language, but the meaning stays. Trolls: where do they come from? The Anti-Socia Network BBC3 Doc. The anti-social network :( Exhaustive computer research project shows shift in English language. Twitter users: A guide to the law. Language and technology: Johnson: Don't fear the Tweeter. Twitter fiction: 21 authors try their hand at 140-character novels.

France Shuns 'Hashtag,' Introduces New Twitter Term, 'Mot-Dièse' How Twitter is winning the 2012 US election. On Twitter, language use varies by gender. Twitter challenge: the results. Tag, You're It! "Hashtag" Wins as 2012 Word of the Year : Word Routes. How Twitter language reveals your gender—or your friends’ - Ideas. Tweet profiling: New Twitter analyzer guesses user age and gender. How social media improved writing. Richard Robbins: Lessons From the Super Bowl: It's All About the Conversation. Welcome to Forbes. TWITTERATURE. The terror of tweeting: social medium or academic message? Language Today sur Twitter : "Have the many languages of the internet turned into sociolects? @jkelloc"