Hemingway. Is Your Writing Bold & Clear. After spending our days writing, we realized a common mistake: sentences easily grow to the point that they became difficult to understand. 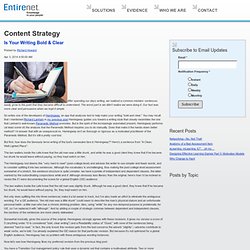 The worst part is we didn’t realize we were doing it. Our text was more clear and persuasive when we kept it simple. So writes one of the developers of Hemingway, an app that analyzes text to help make your writing “bold and clear.” You may recall that I mentioned Richard Lanham in my previous post Hemingway guides you toward a writing style that closely resembles the one that Lanham’s well-known Paramedic Method promotes. But in the spirit of the increasingly automated present, Hemingway performs (at least some of) the analysis that the Paramedic Method requires you to do manually. But first, how does the famously terse writing of the tool’s namesake fare in Hemingway? The Hemingway tool deems this “very hard to read” (post-college level) and advises the writer to use simpler and fewer words, and to consider splitting it into two sentences. Verbs Followed by Gerunds. Verbs Followed by Infinitives. 8 Common Grammar Mistakes You Should Never Make Again. When creating marketing copy, even the most adept writers make mistakes from time to time. 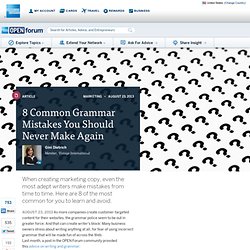 Here are 8 of the most common for you to learn and avoid. August 23, 2013 As more companies create customer-targeted content for their websites, the grammar police seem to be out in greater force. And that can create writer's block: Many business owners stress about writing anything at all, for fear of using incorrect grammar that will be made fun of across the Web. 11 Little-Known Grammatical Errors That Will Shock and Horrify You.

You know who everyone loves? 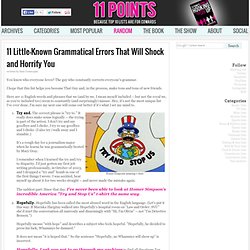 The guy who constantly corrects everyone's grammar. I hope that this list helps you become That Guy and, in the process, make tons and tons of new friends. Here are 11 English words and phrases that we (and by we, I mean myself included -- but not the royal we, as you're included too) seem to constantly (and surprisingly) misuse. Hey, it's not the most unique list I've ever done, I'm sure my next one will come out better if it's what I set my mind to. 56 Delightful Victorian Slang Terms You Should Be Using. In 1909, writing under the pseudonym James Redding Ware, British writer Andrew Forrester published Passing English of the Victorian era, a dictionary of heterodox English, slang and phrase. 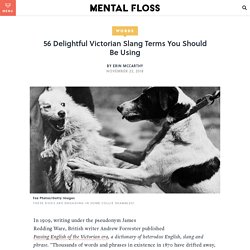 "Thousands of words and phrases in existence in 1870 have drifted away, or changed their forms, or been absorbed, while as many have been added or are being added," he writes in the book's introduction. "‘Passing English’ ripples from countless sources, forming a river of new language which has its tide and its ebb, while its current brings down new ideas and carries away those that have dribbled out of fashion. " Forrester chronicles many hilarious and delightful words in Passing English; we don't know how these phrases ever fell out of fashion, but we propose bringing them back. 1.

Afternoonified A society word meaning “smart.” 2. A figure of speech used to describe drunken men. 3. Thieves used this term to indicate that they wanted “to go out the back way.” About Plain English Campaign. Since 1979, we have been campaigning against gobbledygook, jargon and misleading public information. 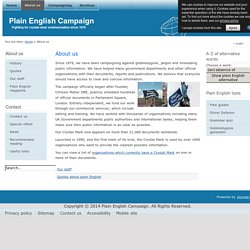 We have helped many government departments and other official organisations with their documents, reports and publications. We believe that everyone should have access to clear and concise information. The campaign officially began after founder, Chrissie Maher OBE, publicly shredded hundreds of official documents in Parliament Square, London. 12 Grammar Mistakes Nearly Everyone Makes. As more and more organizations join the owned media way of marketing, the grammar police seem to be in greater force. 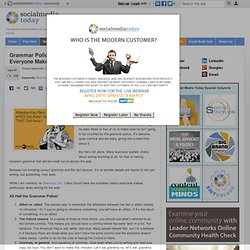 Poor Sam Fiorella. Every time he writes something, he asks three or four of us to make sure he isn’t going to be crucified by the grammar police. It’s become quite comical and we enjoy giving him a hard time about it. But he’s not alone. Many business leaders stress about writing anything at all, for fear of having incorrect grammar that will be made fun of across the web. Ten words to cut from your writing. As Mark Twain famously wrote, "I didn't have time to write a short letter, so I wrote a long one instead. 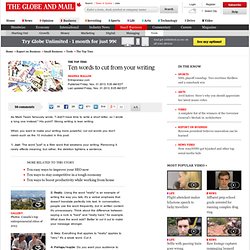 " His point? Microsoft Word - Common English Usage Problems.doc - english_writing2.pdf. Common Errors in English Usage. Use the search form below to find words and phrases on this site. 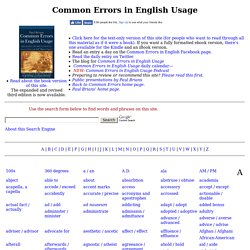 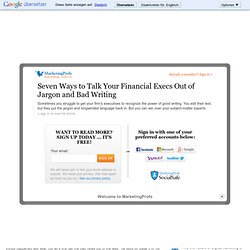 However, sometimes you struggle to get your firm's executives to recognize the power of good writing. You edit their text, but the execs put the jargon and longwinded, indirect language back in. I have seven tips for how to win over your subject-matter experts. Plain English Campaign free guides. Plain English writing tips. These tips come from the specialists who run our Business Writing workshop.Come on our Business Writing workshop to learn more Consider structure, language, and layout Think about your reader and your purpose for writing. 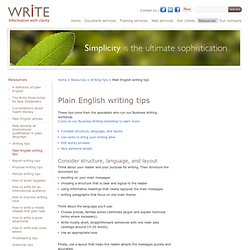 Then structure the document by: deciding on your main messages choosing a structure that is clear and logical to the reader using informative headings that clearly signpost the main messages writing paragraphs that focus on one main theme. Think about the language you'll use. Choose precise, familiar words (eliminate jargon and explain technical terms where necessary). 39 Steps for Writing Plain English by William Lutz. William D. Lutz, author of Doublespeak Defined and The New Doublspeak Scheduled speaker at our international conference, Nov. 3-6, 2005, in Washington, D.C.