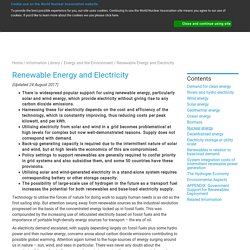 Harnessing these for electricity depends on the cost and efficiency of the technology, which is constantly improving, thus reducing costs per peak kilowatt, and per kWh. Utilising electricity from solar and wind in a grid becomes problematical at high levels for complex but now well-demonstrated reasons. Supply does not correspond with demand. Back-up generating capacity is required due to the intermittent nature of solar and wind, but at high levels the economics of this are compromised.

Technology to utilise the forces of nature for doing work to supply human needs is as old as the first sailing ship. Today we are well advanced in meeting that challenge, while also testing the practical limits of doing so. Department of the Environment and Energy. Reforms to the Renewable Energy Target The Australian Government has settled on reforms to the Renewable Energy Target, following careful consideration and extensive consultations. 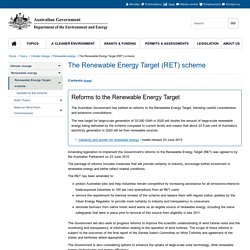 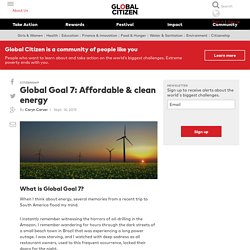 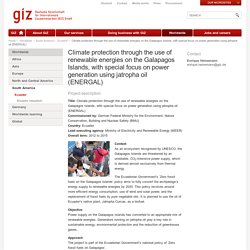 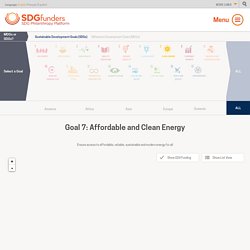 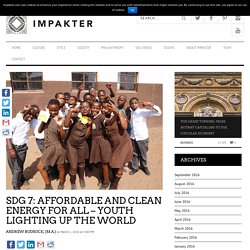 See the introduction to the series here. Goal 7, to ensure access to affordable, reliable, sustainable and modern energy for all, was born of a simple observation: that our climate system is undergoing drastic change as a result of a global economy that is overly reliant on fossil fuels. Alternative energy sources are on the rise and in 2011 they already accounted for more than 20 percent of global power. But this is still not enough, every effort must be made to achieve Goal 7 by 2030. The challenges the developing world faces in this area are stunningly large. Moreover SDG-7 is intimately linked to SDG-1, the Global Goal to fight poverty. Lack of electricity, more specifically lack of light, prevents nighttime reading, work, and socializing. Until fairly recently, the sun was an untapped energy resource. How would you describe Solar for Life? Costa Rica Is Now Running On 100% Renewable Electricity.

In six years, Costa Rica plans to be carbon neutral. 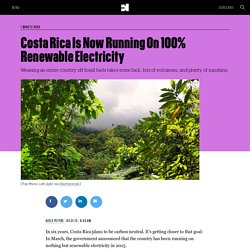 It's getting closer to that goal: In March, the government announced that the country has been running on nothing but renewable electricity in 2015. Compare that to the U.S., where renewables generate only around 13% of electricity. Of course, Costa Rica is tiny in comparison—with a population only about the size of Alabama. Because most people are relatively poor, energy use per household is low. And the country's economy relies on tourism and agriculture, not energy-sucking industries like manufacturing. 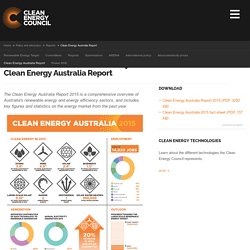 The Clean Energy Australia Report 2015 includes a comprehensive round-up of renewable energy projects, investment, employment and electricity generation. It is the only analysis that includes the National Electricity Market, the Western Australian electricity grid and other major regional grids across the country in areas such as the Northern Territory. The main findings from the report are as follows: Renewable energy provided 14.6 per cent of Australia’s electricity in 2015, enough to provide power for the equivalent of approximately 6.7 million average homes.

This was up on the 13.5 per cent of electricity delivered by renewables the year before. Ecuador Doesn't Have Renewable Energy. Summary: Ecuador is rich in natural resources harnessable into clean energy. 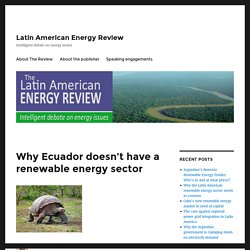 But unless it becomes more consistent in it policymaking, moves a little more quickly, and reduces energy subsidies, it will remain dependent on outside assistance, just like the Galapagos tortoise. [Our thoughts and prayers are with the 22 Ecuadorean soldiers that died this weekend in a plane crash as well as the hundreds in the earthquake. †] About the Author: Carlos St. James is an advisor to energy investors and developers in emerging markets. Go 100% Renewable Energy : Costa Rica - Carbon Neutral by 2020. Photo Credit: ecoseed 100% Renewable Energy Goal: Carbon neutrality by 2021. 95-99% renewable power already achieved, as part of this goal. 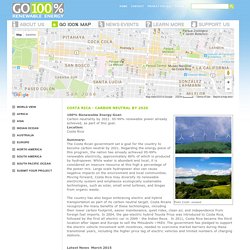 Location: Costa Rica Summary: The Costa Rican government set a goal for the country to become carbon neutral by 2021. The country has also begun embracing electric and hybrid transportation as part of its carbon neutral target. Latest News March 2015. Countries with 100% renewable energy. Cahora Basso, Mozambique Which countries have the highest percentage of renewable energy – care to guess? I suspect that names like Germany, Denmark or Spain might spring to mind. They’re certainly making good progress, but they’ve got nothing on the world’s renewable energy leaders. There are countries in the world powered entirely by renewable energy, and some that are even net exporters of green electricity. These pioneers are overlooked for a variety of reasons. Most often its a matter of categorisation – what is and what isn’t considered renewable energy.

Hassan Rouhani, today met with HE Mohammad Sanusi Barkindo, Secretary General of the Organization of the Petroleum Exporting Countries (OPEC) in Tehran. Renewable Energy in 1970, Renewable Energy Now (Maps) Blmurch via Flickr/CC BY 2.0 There's nothing like a nice 'before and after' image to help drive home a point. And in this case, the point is something like this: Even though it at times feels like it's moving much, much too slowly, the renewable energy revolution is well underway. Just take a look at these maps from Black & Veatch (via Grist), and observe how many renewable energy projects were installed or planned for imminent installation in 1970: Black & Veatch/Promo image Pretty vacant, right?

Progress! Of course, technology is rapidly improving, and the increasing efficiency of wind, and especially solar projects means they'll be producing more power for their buck and given area. Renewable energy 101 - Origin Energy. Goal 7.