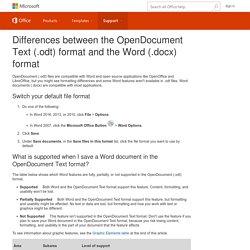 Integrate Online Editors to Work with Your Documents - ONLYOFFICE - ONLYOFFICE™ ONLYOFFICE Integration Edition is an advanced component that enables you to view, edit and collaboratively work with documents, spreadsheets and presentations directly from your web application. 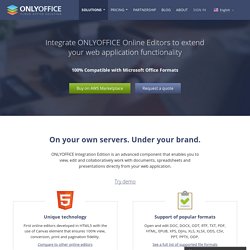 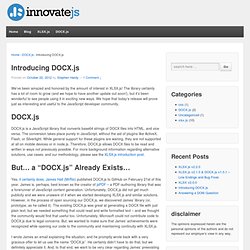 The library certainly has a lot of room to grow (and we hope to have another update out soon!) , but it’s been wonderful to see people using it in exciting new ways. We hope that today’s release will prove just as interesting and useful to the JavaScript developer community. DOCX.js is a JavaScript library that converts base64 strings of DOCX files into HTML, and vice versa. The conversion takes place purely in JavaScript, without the aid of plugins like ActiveX, Flash, or Silverlight. Yes, it certainly does. I wrote James an email explaining the situation, and he promptly wrote back with a very gracious offer to let us use the name “DOCX.js”.

When we started writing XLSX.js, there was a fundamental problem to address: What does a JavaScript representation of a spreadsheet look like? Ready to get at it? Please let us know if you experience any issues, and we’ll try to get back to you as soon as our work allows. Open XML, SharePoint, and Office. XML.com. Opening Open Formats with XSLT February 04, 2004 This month I'm taking a break from covering XSLT 2.0 to describe how the combination of XSLT 1.0 and an application with an open XML format solved a problem for me. 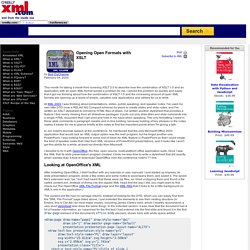 I solved this problem so quickly and easily that it got me thinking about how the combination of XSLT 1.0 and the increasing amount of open XML formats are opening up a world of simple, valuable new applications and utilities for us to write. At XML 2003 I was thinking about presentations, slides, public speaking, and speaker notes. I've used my own little DTD (now a RELAX NG Compact schema) for years to create slides and slide notes, and I've written an XSLT stylesheet to convert to HTML files of slides.

In Jon Udell's keynote speech at the conference, he mentioned that the only Microsoft Office 2003 application that would lack an XML output option was the mail program, but he forgot another one, PowerPoint. Looking at OpenOffice's XML Speaker Notes from PowerPoint. Transforming Open XML Documents using XSLT. Transforming Open XML documents using XSLT is an interesting scenario. 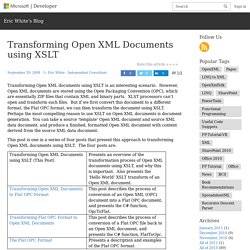 Conversion of OpenXML (WordProcessingML) to HTML using XSLT : Part 1 This article is a stepping stone in the journey of converting OpenXML format of Microsoft word to HTML. 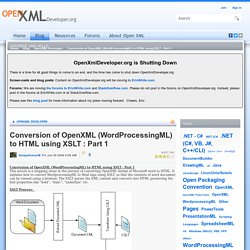 It explains how to convert WordprocessingML to Html tags using XSLT, so that the contents of word document can be viewed using a browser. The XSLT parses the XML content and converts into HTML preserving the font properties like “bold”, “italic”, “underline” etc. ClosedXML - The easy way to OpenXML - Home. GitHub - duplicati/duplicati: Store securely encrypted backups on cloud storage services! Onetastic for OneNote - OneNote SkyDrive Sync. For future development of Onetastic(Why?) 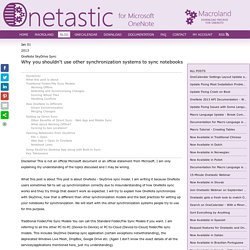 Jan 012013 OneNote SkyDrive Sync Why you shouldn't use other synchronization systems to sync notebooks Disclaimer This is not an official Microsoft document or an official statement from Microsoft. Malte Ahrens. As with other Microsoft Office applications, you can also create add-ins for OneNote. 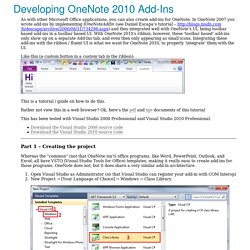 In OneNote 2007 you wrote add-ins by implementing IOneNoteAddin (see Daniel Escapa’s tutorial – and they integrated well with OneNote’s UI, being toolbar based add-ins in a toolbar based UI. With OneNote 2010′s ribbon, however, these ‘toolbar based’ add-ins only show up on a separate Add-Ins tab, and even then only appearing as small icons. Integrating these add-ins with the ribbon / fluent UI is what we want for OneNote 2010, to properly ‘integrate’ them with the UI. Like this (a custom button in a custom tab in the ribbon): 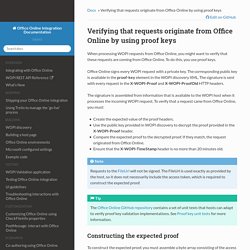 To do this, you use proof keys. Office Online signs every WOPI request with a private key. The corresponding public key is available in the proof-key element in the WOPI discovery XML. The signature is sent with every request in the X-WOPI-Proof and X-WOPI-ProofOld HTTP headers. The signature is assembled from information that is available to the WOPI host when it processes the incoming WOPI request.

Create the expected value of the proof headers.Use the public key provided in WOPI discovery to decrypt the proof provided in the X-WOPI-Proof header.Compare the expected proof to the decrypted proof. Note Requests to the FileUrl will not be signed. Constructing the expected proof¶ To convert the access token and request URL values, which are strings, to byte arrays, you must ensure the original strings are in UTF-8 first, then convert the UTF-8 strings to byte arrays. 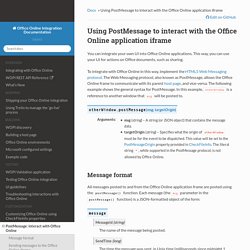 This way, you can use your UI for actions on Office documents, such as sharing. To integrate with Office Online in this way, implement the HTML5 Web Messaging protocol. The Web Messaging protocol, also known as PostMessage, allows the Office Online frame to communicate with its parent host page, and vice-versa. The following example shows the general syntax for PostMessage. In this example, otherWindow is a reference to another window that msg will be posted to. otherWindow.postMessage(msg, targetOrigin)¶ Message format¶ Office-Online-Test-Tools-and-Documentation/SampleHostPage.html at master · Microsoft/Office-Online-Test-Tools-and-Documentation.

Office-Online-Test-Tools-and-Documentation/samples at master · CedarLogic/Office-Online-Test-Tools-and-Documentation. Building an Office Web Apps (OWA) WOPI Host sample in C# for Visual Studio 2013. Office Web Apps 2013 Integration Series, Part 5: Introduction to WOPI. This is the fifth part in the series of blog posts on how to integrate Office Web Apps Server with custom applications. Update 2014-11-26: This series of blog post has been terminated and I do not plan to write any more posts about this subject.

Sorry! In this blog post I try to avoid calling Office Web Apps a “server”, because there are actually three different actors in the play here and Office Web Apps is not the server in this show. In the WOPI-world a WOPI client (Office Web Apps) fetches the file from the WOPI server (our custom application) and allows the user to view/edit it via a browser. You can think of the browser as the environment we live in and the Office Web Apps as the online version of the traditional MS Office application, if that helps you keep things more clear in you head. C# - Can I just use Office Web Apps Server. Edition 1 – WOPI Client in SharePoint 2013. December 20, 2012 by Raghavendra Shanbhag.

MCSM, MCM and MVP - SharePoint 2013: Building your own WOPI Client, part 1 - Contents tagged with WOPI - Tags. Welcome back to another part in my Building a WOPI Client series. In the previous and first post I walked you through the basics of the WOPI protocol, how the WOPI Discovery mechanism worked and how to implement it and finally how to register a WOPI Client with SharePoint 2013 as WOPI Server. In this post we’ll continue to build on our C# Viewer and now actually add the viewer – we ended the last post quite dull with just showing a simple Hello WOPI web page which we now are going to turn into a real C# viewer. The WOPI Protocol Specification (currently) lacks some details… The WOPI (Web Application Open Platform Interface) Protocol specification is currently in draft mode (version 0.2) and most of what is in this post is not defined in the specs, especially regarding the security and signing stuff. All the details in this post comes from extensive trial and error, and might be wrong – I’m trying to keep the post up to date once the specs are finalized.

MCSM, MCM and MVP - SharePoint 2013: Building your own WOPI Client, part 1. Hi friends, finally time for some posts with some real code samples, and not some silly scripts. In this post, and a couple of follow up posts, I will walk you through the basics behind the WOPI protocol and WOPI Apps and WOPI Hosts. RETIRED Office and Office 365 dev blog. This blog post describes how to create a custom WOPI host. [MS-WOPI]: Overview. WOPI defines a set of operations that enables a client to access and change files stored by a server. This allows the client to render files and provide file editing functionality for files stored by the server. [MS-WOPI]: Protocol Examples. Building an Office Web Apps (OWA) WOPI Host. UPDATE: January 31, 2014 The solution and project have been updated to MVC5, and Web API 2. In addition, editing PowerPoint (PPTX), and Excel files has been added. Office Web Apps 2013 Integration Series, Part 5: Introduction to WOPI.

C# - Can I just use Office Web Apps Server. [MS-WOPI]: Web Application Open Platform Interface Protocol. Intellectual Property Rights Notice for Open Specifications Documentation Technical Documentation. Microsoft publishes Open Specifications documentation for protocols, file formats, languages, standards as well as overviews of the interaction among each of these technologies. Creating Office Add-ins with Yeoman - YO OFFICE! Introducing ng-OfficeUIFabric: Angular Directives for Office UI Fabric. As I said in my last post, when the Office UI Fabric came out I immediately put in a feature request on the site for Angular directives the same way we have other design languages like Bootstrap & Google's Material Design.

There are projects that have created Angular directives for these design languages: UI Bootstrap & Angular Material. As you can see from the resolution of that issue, as well as from a dialog in a public Yammer network with the project owner at Microsoft, I took it upon myself to spin up a community project... In my last post post, Introducing OfficeUIFabric.com - Demos and Reference Samples for the Office UI Fabric I talked about the new OfficeUIFabric.com site I started to have a good publically accessible and easy to reference the features and components within the Office UI Fabric. I created it because before we create an Angular directive body of work, we first need something to base them on. Dev Center - Code Samples. API Sandbox. Office Dev Center - Homepage. The WordMeister » Web Add-ins: Coercion types in Word. In the last four installments, the basics of creating a Web Add-in and reading/inserting information was introduced, using two different data formats: matrix and plain text.