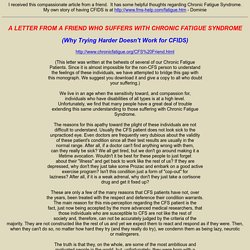 Since it is almost impossible for the non-CFS person to understandthe feelings of these individuals, we have attempted to bridge this gap withthis monograph. We suggest you download it and give a copy to all who doubtyour suffering.) Mom Needs To Lie Down: The years and lives slept away by ME/CFS. New research sheds light on mysterious fibromyalgia pain. Fibromyalgia affects 1% to 5% of Americans, mainly women, but until recently, scientists had no idea what might be causing its severe and mysterious pains. 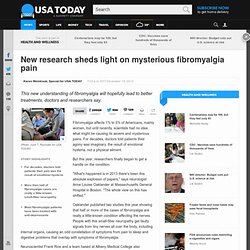 For decades, doctors told patients their agony was imaginary, the result of emotional hysteria, not a physical ailment. But this year, researchers finally began to get a handle on the condition. "What's happened is in 2013 there's been this absolute explosion of papers," says neurologist Anne Louise Oaklander at Massachusetts General Hospital in Boston. "The whole view on this has shifted. " Oaklander published two studies this year showing that half or more of the cases of fibromyalgia are really a little-known condition affecting the nerves. How Achy Joints Predict the Weather.

(10) Fibromyalgia Awareness. Fms-help. Potential for a faster, simpler diagnosis for fibromyalgia using a finger-stick blood sample. New Fibromyalgia Blood Test is 99% Accurate. A new blood test for fibromyalgia is more accurate than previously thought and will not confuse the chronic pain disorder with other diseases such as lupus and rheumatoid arthritis, according to the physician who developed the test. 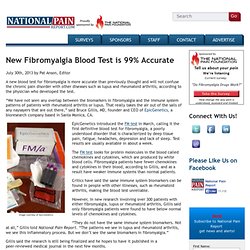 “We have not seen any overlap between the biomarkers in fibromyalgia and the immune system patterns of patients with rheumatoid arthritis or lupus. That really takes the air out of the sails of any naysayers that are out there,” said Bruce Gillis, MD, founder and CEO of EpicGenetics, a bioresearch company based in Santa Monica, CA. Image courtesy of EpicGenetics EpicGenetics introduced the FM test in March, calling it the first definitive blood test for fibromyalgia, a poorly understood disorder that is characterized by deep tissue pain, fatigue, headaches, depression and lack of sleep.

Test results are usually available in about a week. “They do not have the same immune system biomarkers. Dr. Fibromyalgia Mystery Finally Solved! Researchers have found the main source of pain in Fibromyalgia patients, and contrary to what many believe, it does not stem from the brain. 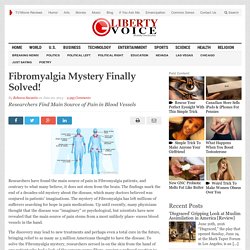 The findings mark the end of a decades-old mystery about the disease, which many doctors believed was conjured in patients’ imaginations. The mystery of Fibromyalgia has left millions of sufferers searching for hope in pain medications. Up until recently, many physicians thought that the disease was “imaginary” or psychological, but scientists have now revealed that the main source of pain stems from a most unlikely place- excess blood vessels in the hand. The discovery may lead to new treatments and perhaps even a total cure in the future, bringing relief to as many as 5 million Americans thought to have the disease. Fibrowheel. Do you have trouble explaining your fibromyalgia and chronic fatigue syndrome problems to others??? 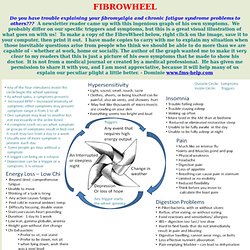 A newsletter reader came up with this ingenious graph of his own symptoms. We probably differ on our specific triggers and symptoms, but this is a great visual illustration of what goes on with us! To make a copy of the FibroWheel below, right click on the image, save it to your computer, then print it out. Morning Stiffness Among Common Symptoms of Fibromyalgia. “When clinicians are asked which symptoms are the most debilitating in patients with fibromyalgia, the most common responses include pain, fatigue, and sleep disturbances,” states lead author of a recent study by Robert Bennett, M.D., of Oregon Health and Science University in Portland.1 He adds patients also report stiffness as an important symptom. 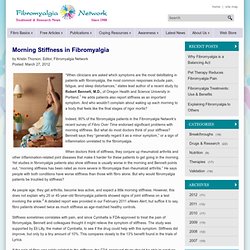 And who wouldn’t complain about waking up each morning to a body that feels like the final stages of rigor mortis? Indeed, 90% of the fibromyalgia patients in the Fibromyalgia Network’s recent survey of Fibro Over Time endorsed significant problems with morning stiffness. But what do most doctors think of your stiffness? Bennett says they “generally regard it as a minor symptom,” or a sign of inflammation unrelated to the fibromyalgia. When doctors think of stiffness, they conjure up rheumatoid arthritis and other inflammation-related joint diseases that make it harder for these patients to get going in the morning. 1. Fibromyalgia and Fatigue Centers.

How to Feel Younger - how to cure yourself. Over the years I have tried many vitamins, minerals, herbs, and other supplements. 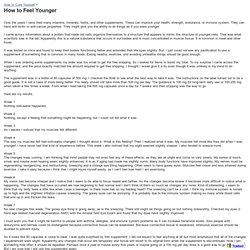 These can improve your health, strength, endurance, or immune system. They can have anti-biotic or anti-cancer properties. They might give you the ability to do things as if you were younger. I came across information about a protein that made old cells organize themselves to a structure that appears to mimic the structure of younger cells. That was what scientists saw in the lab. It was tested on mice and found to keep their bodies functioning better and extended their life span slightly. When I was ordering some supplements my order was too small to get the free shipping. Search. Fibromyalgia.