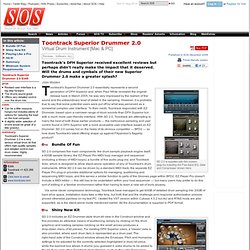 Will the drums and cymbals of their new Superior Drummer 2.0 make a greater splash? John Walden SD 2.0 is supplied with five custom plug-ins including the Five-band EQ, Gate and Compressor shown here. Toontrack's Superior Drummer 2.0 essentially represents a second generation of DFH Superior and, when Paul White reviewed the original release back in March 2005, he was very impressed by the realism of the sound and the extraordinary level of detail in the sampling. 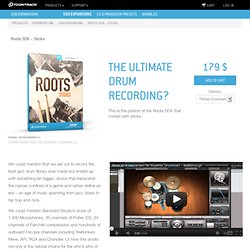 The Neve 8078 was the last of the “80 series” hand-wired analogue mixing consoles designed and manufactured by Neve for high-end recording studios during the 1970s. These consoles are considered by many experts to be the Rolls Royce of desks and are highly sought after. Each console took several months to build using over 2,500 hours of highly skilled labour and top quality components.

It would now be uneconomic to manufacture such equipment to this standard. Music City USA SDX. With more labels, publishers, writers, producers, musicians and artists per capita than any other city in North America, the fact that Nashville, TN is nicknamed Music City, USA surprises very few. 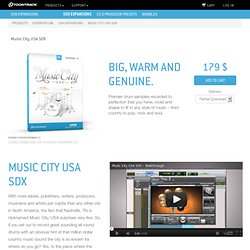 So, if you set out to record great sounding all-round drums with an obvious hint of that million dollar country music-sound the city is so known for, where do you go? Yes, to the place where the lion’s share of all chart-breaking country productions are made – you go to to Music City, USA. Then of course you look up two of Nashville’s most influential names in engineering and overall musicianship: Chuck Ainlay and Harry Stinson. 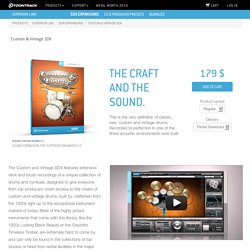 The New York Studios Vol.2 SDX was recorded by engineers Neil Dorfsman and Pat Thrall together with drummer Nir Z. 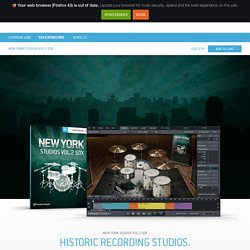 It includes a collection of unique drums sampled in two of the most noted New York studios ever: the Allaire Studios and The Hit Factory. These two landmark facilities have hosted the who’s who of popular music for decades – anything from David Bowie to Stevie Wonder, Michael Jackson, The Rolling Stones and Paul Simon. The New York Studios Vol.2 SDX is divided in two separate libraries, one for each studio. In total, it comes with 13 snare drums, seven sets of toms, seven kicks and a wide assortment of different cymbals – all sampled with extreme detail and showcasing the incredible sonic qualities of these two rooms. The room at Allaire Studios is ambient, reverberant and almost church-like in its construction. The New York Studios Vol.2 SDX presents the essence of quality drums recorded in big, sonically perfect rooms. Indiependent SDX. The Indiependent SDX presents an impressive collection of vintage drums recorded at a true landmark in the ever-shifting rock and indie scene of Seattle, WA – the Avast! 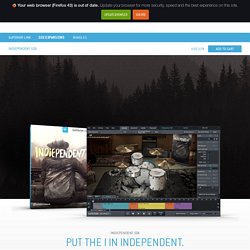 Recording Co. For the past twenty years, this seemingly modest studio has left sonic footprints not only in recent music history but a vivid dent on culture as we know it. And even if bands like Fleet Foxes, Death Cab for Cutie and Band of Horses went on to greatly transcend any studio or sound, there’s a special something attributed to anything that exits these doors. Welcome to possibly the world’s most genuine and unique collection of drum samples – handpicked for indie music but reaching farther, beyond the divides of a specific genre.

Put the I in independent. The Indiependent SDX comes from the same sessions as the widely popular Indie Folk EZX but features the raw, unprocessed recordings.