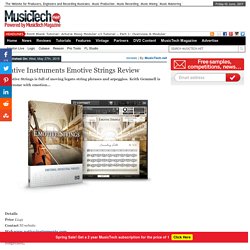 Action Strings is a set of cinematic string orchestra phrases recorded by game music producers Dynamedion and performed by the FILMharmonic Orchestra Prague. 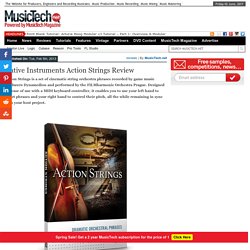 Designed for ease of use with a MIDI keyboard controller, it enables you to use your left hand to select phrases and your right hand to control their pitch, all the while remaining in sync with your host project. Manufacturer: Native InstrumentsPrice: €299Contact: 2twenty2 – 0845 299 4222Web: www.native-instruments.com <A HREF=" Widgets</A> 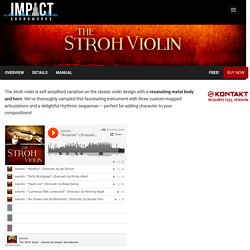 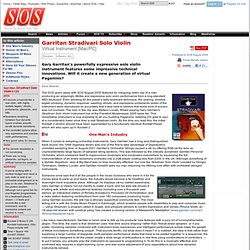 Will it create a new generation of virtual Paganinis? Dave Stewart The DVD given away with SOS August 2005 featured an intriguing video clip of a man producing an amazingly lifelike and expressive solo violin performance from a bog-standard MIDI keyboard. Even allowing for the player's tasty keyboard technique, the soaring, emotive legato phrasing, dynamic response, swelling vibrato, and expressive portamento slides of the instrument were reproduced so accurately that it was hard to believe that some kind of sorcery was not involved. The man in the clip was Stefano Lucato, filmed playing Gary Garritan's Stradivari Solo Violin instrument live at the Frankfurt Musikmesse 2005 trade fair. When it comes to sampling orchestral instruments, Gary Garritan has a long and distinguished track record. 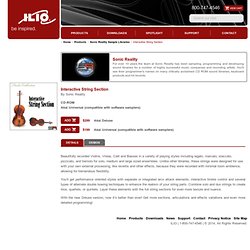 Unlike other libraries, these strings were designed for use with your own external processing, like reverbs and other effects, because they were recorded with minimal room ambience, allowing for tremendous flexibility. You’ll get performance oriented styles with separate or integrated arco attack elements, interactive timbre control and several types of alternate double bowing techniques to enhance the realism of your string parts. Combine solo and duo strings to create trios, quartets, or quintets. Layer these elements with the full string sections for even more texture and nuance. 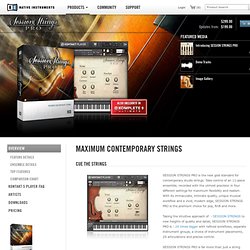 Take control of an 11-piece ensemble, recorded with the utmost precision in four different settings for maximum flexibility and realism. With its immaculate, intimate quality, unique musical workflow and a vivid, modern edge, SESSION STRINGS PRO is the premium choice for pop, RnB and more. Taking the intuitive approach of SESSION STRINGS to new heights of quality and detail, SESSION STRINGS PRO is20 times bigger with refined workflows, separate instrument groups, a choice of instrument placements, 29 articulations and precise control. 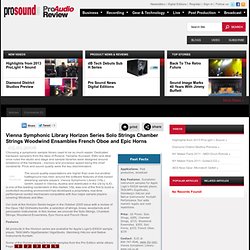 Dedicated hardware samplers from the likes of Roland, Yamaha, Kurzweil, EMU and Akai once ruled the studio and stage and sample libraries were designed around limitations of the hardware - memory and processor speed being the chief constraints. Price and sound quality were the key discriminators.The sound quality expectations are higher than ever but another battleground has risen around the software features of disk-based streaming sample players. Vienna Symphonic Library (VSL), GmbH, based in Vienna, Austria and distributed in the US by ILIO, is one of the leading contenders in this market.

VSL was one of the first to build a controlled recording environment has developed a proprietary, real-time performance control mechanism compatible with four major sample players covering Windows and Mac. Features Some of the Horizon products include samples from the Pro Edition while others are completely new. In Use Summary. 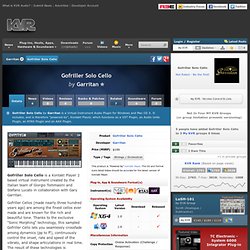 The OS and Format icons listed below should be accurate for the latest version of Kontakt Player. Plug-in, App & Soundware Format(s) Operating System Availability Miscellaneous Information Gofriller Solo Cello is a Kontakt Player 2 based virtual instrument created by the Italian team of Giorgio Tommasini and Stefano Lucato in collaboration with Gary Garritan. Gofriller Cellos (made nearly three hundred years ago) are among the finest cellos ever made and are known for the rich and beautiful tone. PocketBlakus Free Solo Cello. Inspired by a post by HZ I decided to have a crack at a simple, slow moving, expressive solo cello. 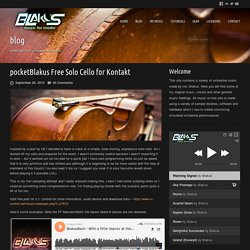 So I dusted off my cello and prepared for the worst. I wasn’t extremely careful because I wasn’t expecting it to work – but it worked out not too bad for a quick job! I have zero programming skills so just be aware that it is very primitive and has limited use (although it is beginning to be far more useful with the help of members of this forum!) I’ve also kept it dry so I suggest you soak it in your favourite reverb (even before playing it if possible LOL). Zero-G ANIMATO String & Flute FX. 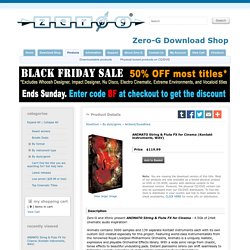 Animato contains 3000 samples and 139 separate Kontakt instruments each with its own custom GUI created especially for this project. Featuring world-class instrumentalists from the renowned Royal Liverpool Philharmonic Orchestra, Animato is a uniquely realistic, expressive and playable Orchestral Effects library. With a wide sonic range from chaotic, tense effects to beautiful undulating pads. Distant pianissimo sirens can shift seamlessly to fortissimo ungodly screeches all at the simple command of your Mod Wheel. The 20th century saw the extreme sonic possibilities and expressive potential of classical instruments gradually become standard compositional tools of pioneering concert and film composers. REVIEWS: (click the name of the magazine to read the full review): Intimate Strings LITE.