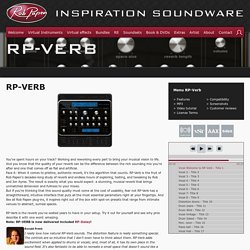 Working and reworking every part to bring your musical vision to life. And you know that the quality of your reverb can be the difference between the rich sounding mix you're after and one that comes off as flat and artificial. Face it: When it comes to pristine, authentic reverb, it's the algorithm that counts. R0Verb - Multi Delay Spaces. REVerence. REVerence is a convolution tool that allows you to apply room characteristics (reverb) to the audio. 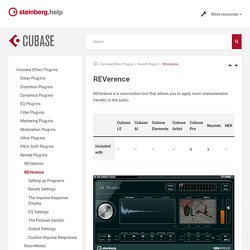 This is done by processing the audio signal according to an impulse response – a recording of an impulse in a room or another location that recreates the characteristics of the room. As a result, the processed audio sounds as if it were played in the same location. Included with the plug-in are top quality samples of real spaces to create reverberation. Note REVerence can be very demanding in terms of RAM.

Program Matrix. The Winchester. U-he ZRev artificial reverb designer. REVelation. The early reflections are responsible for the spatial impression in the first milliseconds of the reverb. 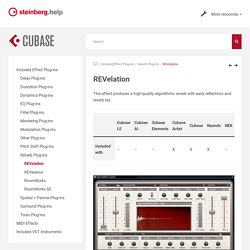 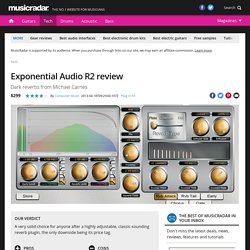 Company founder Michael Carnes is the DSP wiz behind the Lexicon PCM Native Bundle and various other high-end Lexicon reverbs. So, although it seems to have appeared out of nowhere, this plugin has to be taken very seriously indeed. Protoverb: Experimental research reverb. Feel it in the air What is Protoverb? 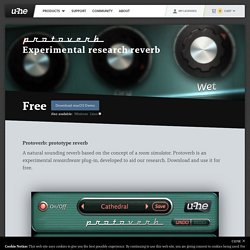 Protoverb is an experimental room simulator reverb. Most algorithmic reverbs try to avoid resonances or model the reflections of sound from a room’s walls. Protoverb does the opposite. It builds up as many room resonances as possible, modelling the body of air in the room. Notes held for a longer time tend to build up resonance, as if the air takes a while to get excited Multiple instruments remain distinct, without disappearing in a wash When you play a short melody, the room seems to repeat a ghost echo of that melody. Reason RV-7 Digital Reverb. Reason Plate Reverb. Using Reverb & Delay. Reverb and delay are vital tools for mixing. 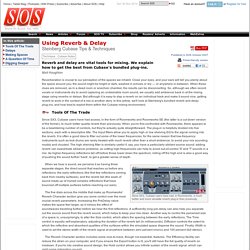 We explain how to get the best from Cubase's bundled plug-ins. Matt Houghton Reverberation is crucial to our perception of the spaces we inhabit. Close your eyes, and your ears will tell you plenty about the space around you; the sound might be bright or dark, washed in echoes or dry — or anywhere in between. When these clues are removed, as in a dead room or anechoic chamber, the results can be disconcerting. Tools Of The Trade. 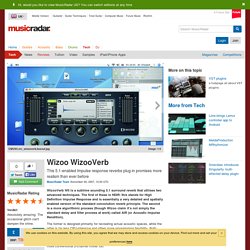 The first of these is HDIR: this stands for High Definition Impulse Response and is essentially a very detailed and spatially enabled version of the standard convolution reverb principle. The second is a more algorithmic process (though Wizoo claim it’s not simply the standard delay and filter process at work) called AIR (or Acoustic Impulse Rendition). The former is designed primarily for recreating actual acoustic spaces, while the latter is far less CPU-intensive and offers more programming flexibility. Both processes sound absolutely mind-blowing -- you really can close you eyes and pick out three-dimensional spaces with your ears.

Even in basic stereo mode, W5 is a joy to listen to, and all of its proud owners will undoubtedly use it on their more conventional 2-channel mixes too. Neat touches Head round to WizooVerb’s virtual backside and you’ll find some fantastic routing options. Glitches. IK Multimedia - CSR Plate Reverb. IK Multimedia - CSR Inverse Reverb. T-RackS® is a registered trademark property of IK Multimedia Production. 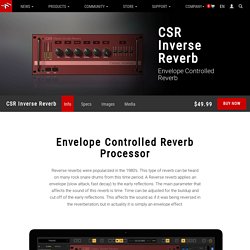 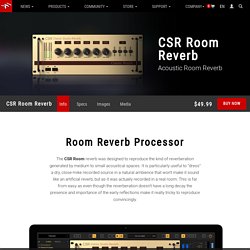 All other product names and trademarks are the property of their respective owners, which are in no way associated or affiliated with IK Multimedia. Product names are used solely for the purpose of identifying the specific products that were studied during IK Multimedia’s sound model development and for describing certain types of tones produced with IK Multimedia’s digital modeling technology. Use of these names does not imply any cooperation or endorsement. LA-2A and 1176 LN are registered trademarks of Universal Audio, Inc. IK Multimedia's products, specifically, the T-RackS 3 Black 76 Limiting Amplifier and T-RackS 3 White 2A Leveling Amplifier, are manufactured and developed by IK Multimedia based on its own modeling techniques. 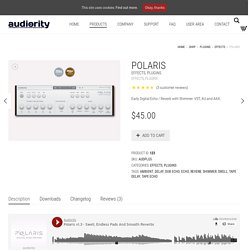 Eventide T-Verb Soundonsound. Emulating the setup of gates and room mics on the vocal treatment Tony Visconti used for the David Bowie track ‘Heroes’, Eventide's plug-in is more than a one-trick pony... I recall interviewing Tony Visconti many years ago, when he was still operating Good Earth Studios in Soho, and he explained to me the setup of gates and room mics that this plug-in emulates.

We were discussing the vocal treatment he used on the David Bowie track ‘Heroes’, from the album of the same name. At the time, it was a very inventive way of working around the limitation of having only one tape track left for the vocal. It was also quite brave, as the gate settings that are a key part of his original setup are crucial, and a wrong setting could have ruined an otherwise perfect take. Tony set up three microphones in the hall of Berlin’s Hansa Studios: one conventional close mic and the other two at different distances back in the hall, where they would pick up a lot of the hall’s natural reverb.

TrueVerb Reverb Plugin. Renaissance Reverb Plugin. IR-L Convolution Reverb Plugin. PSP Audioware PSP 85 review. If there's one effects processor that we never get tired of tinkering with, it's the delay processor. Whether we use it to add a dash of chorus-like character, create an unexpected musical riff, fill out some space in a mix as an alternative to reverb or simply make things sound utterly bonkers, a good delay unit is your trusted production partner. Seven long years have passed since we first tried PSP 84. Too often dismissed as simply a dual-channel version of the PSP 42 (which is based on the classic Lexicon PCM42 delay unit), PSP 84 was actually a far more powerful beast, with a plethora of additional features.

PSP PianoVerb2 creative resonant reverb plug-in. PSP PianoVerb2 is a redesigned and improved creative resonant reverb plug-in (VST, AAX and RTAS for Windows; AudioUnit, VST, AAX and RTAS for Mac OSX) plug-in based on our famous and beloved freeware plug-in PSP PianoVerb. Like the original PianoVerb it creates its unique sound with twelve resonant filters that mimic the behavior of piano strings. The ability to transpose, tune and detune the set of strings allow you to set up PianoVerb2 to deliver a wide range of reverberations ranging from traditional wide spread reverb to unique and unusual resonances. With the addition of a brand new modulation section and the ability to set up multiple settings of time and damping and decay freezing (via A/B comparison function) this little plug-in delivers amazing options for creative use. PSP PianoVerb2 is not really an upgrade from the previous free pianoverb but a powerful reverb plugin tailored & aimed at the piano ( although I've just tried it on guitars ).

David A Israel, Smitematter.com. Blackhole. Ambient EZmix Pack. The Ambient EZmix Pack is a collection of settings specifically aimed at creating large, reverberant soundscapes. A creative toolbox, perfect for use in atmospheric compositions spanning anything from motion picture scores to modern pop and a wide array of other musical contexts. It comes complete with ready-made amp/cab simulation settings for guitar and bass, including deep textures of bit crushed reverbs, bouncing delays and tremolos.

Also, in addition to its settings tailored for vocals and drums, the Ambient EZmix Pack comes with a selection of signal chains designed to work on any melodic instrument – be it piano, organ, flute or guitar. But of course – any setting can be applied on whatever audio source you may have. A richly saturated guitar preset might just be the perfect fit for your piano.