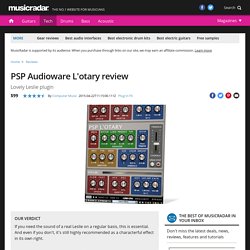 It's divided into Horn, Drum and global sections. Horn and Drum handle the main mechanical aspects of the Leslie cabinets they aim to virtualise: a revolving horn speaker and a fixed woofer projecting its sound down into a revolving drum with an open side. Both have the same parameter set, starting with two Speed dials: Slow and Fast (0-10,000Hz), setting the top (Tremolo) and bottom (Chorale) limits of the Speed lever on the right. "Running any of the 122 and 147 staples - Hammond, Rhodes, Clavinet, etc - through it is enough to weaken the knees" The last sets the cutoff frequency of a high-pass filter (20Hz-1kHz) for the Horn and a Low-pass filter (200Hz-20kHz) for the Drum.

The Ambience section follows, shaping the virtual room in which the virtual Leslie is situated via its Size, Colour and Amount knobs. Amplitube Acoustic Sim. Rob Papen RP-Reverse Tutorial. Rob Papen RP-Amod. As you will probably know, a modulator is a term that is used in synthesizers. 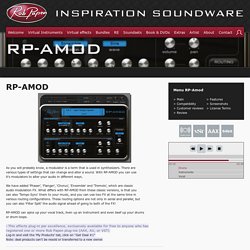 There are various types of settings that can change and alter a sound. With RP-AMOD you can use it's modulators to alter your audio in different ways. We have added ‘Phaser’, ‘Flanger’, ‘Chorus’, ‘Ensemble’ and ‘Tremolo’, which are classic audio modulation FX. Can also ‘Tempo Sync’ them to your music, and you can use two FX at the same time in various routing configurations. You can also ‘Filter Split’ the audio signal ahead of going to both of the FX! Formant Filter by kiloHearts. Formant Filter shapes the sound in a similar way to how the vocal tract works, leading to vowel-esque sounds. 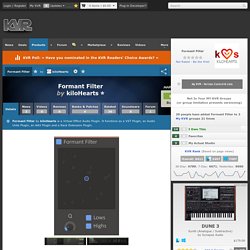 It will boost two frequencies to mimic the sounds of different vowels: Vowel Selector - Selects two frequencies to boost. We've put the phonetic symbols of some common vowel sounds on the selection pane. (Honestly that doesn't help much. I have no idea how ɤ sounds anyway.) Formant Filter shines on it's own, but it was primarily created to power up the different "Snapin Hosts" Kilohearts offer. kHs - Reverser. Get the Rack Extension Remember in The Ring when Samara kind of walks backwards but still towards you and it's all scary and weird? 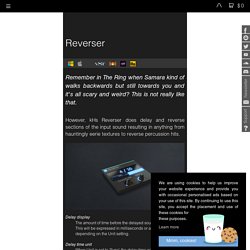 This is not really like that. Enigma Modulation Effect Plugin. Reason Bass Filter. Reason Synchronous. – FAT Analog Style HP/LP Filter. – FAT Analog Style HP/LP Filter – [Audio Plugin, VST, AU, AAX] Whilst hard at work in the studio, some members of the SoundSpot team discovered that when they were making their filter sweep transitions, they were forced to use heavy, full featured EQ’s & were using way more CPU power than seemed logical.

They also found that they were coming across strange crackling digital artefacts when using some plugins over certain sound sources. This was all far from ideal, so with this in mind, the SoundSpot team decided enough was enough, and set out to create a solution to fix the problem. Reason Alligator. MetaFilter - Creative Filter Plugin. Brauer Motion – Spherical Auto-Panner. Create an unprecedented world of movement inside your mixes with this circular stereo auto-panner designed with top mixer Michael Brauer (Coldplay). 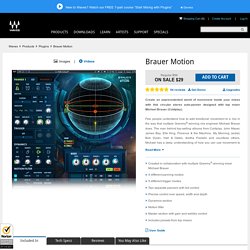 Few people understand how to add emotional movement to a mix in the way that multiple Grammy®-winning mix engineer Michael Brauer does. The man behind top-selling albums from Coldplay, John Mayer, James Bay, Elle King, Florence & the Machine, My Morning Jacket, Bob Dylan, Hall & Oates, Aretha Franklin and countless others, Michael has a deep understanding of how you can use movement to energize a mix.

Brauer Motion takes Michael’s mastery of the sound spectrum and lets you control the movement of your sounds unlike anything else in your toolkit. MiniFilter V Introduction Tutorial. 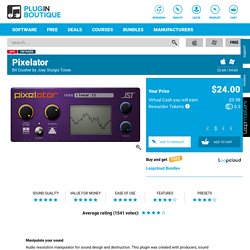