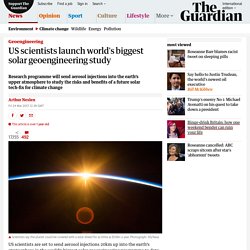 The $20m (£16m) Harvard University project will launch within weeks and aims to establish whether the technology can safely simulate the atmospheric cooling effects of a volcanic eruption, if a last ditch bid to halt climate change is one day needed. Scientists hope to complete two small-scale dispersals of first water and then calcium carbonate particles by 2022. Future tests could involve seeding the sky with aluminium oxide – or even diamonds. “This is not the first or the only university study,” said Gernot Wagner, the project’s co-founder, “but it is most certainly the largest, and the most comprehensive.” “But solar geoengineering is not the answer,” he said. Natural alterations to the earth’s radiation balance can be short-lasting, but terrifying.

Company Looks to Freeze a Living Human Brain to "Resurrect" it by 2045. Would you freeze your brain for the chance to live again? 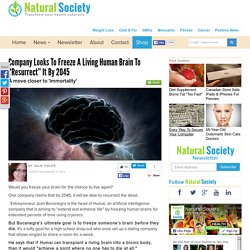 He dismisses criticism of his mission by pointing out that “there are promising breakthroughs happening every year in neuroscience and biotechnology.” Mind Melds and Brain Beams: The Dawn of Brain-to-Brain Communication. NEW HUMAN ORGAN DISCOVERED!!! WILL REWRITE MEDICAL HISTORY - Mandela Effect. D.I. Dubrovsky: “Cybernetic immortality. Fantasy or scientific problem?” David Dubrovsky, co-chairman of the Scientific council of the Russian Academy of Sciences for artificial intelligence modeling. 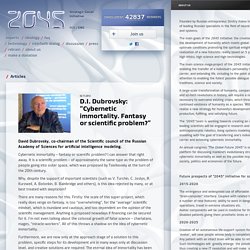 Cybernetic immortality – fantasy or scientific problem? I can answer that right away. It is a scientific problem – of approximately the same type as the problem of people going into outer space, which was proposed by Tsiolkovsky at the turn of the 20th century. Why, despite the support of important scientists (such as V. Turchin, C. There are many reasons for this. Furthermore, we are now only at the approach stage of a solution to this problem, specific steps for its development are in many ways only at discussion level, and creative solutions are required.

But no matter what people say, the idea of immortality still holds a rank of the highest value in human culture, and expresses the fact that humans are not reconciled with death. The top 10 most outrageous science hoaxes of 2016 – NaturalNews.com. (NaturalNews) Science hoaxes were running rampant throughout 2016, pushed by the fakestream media (CNN, WashPost, NYT, etc.) alongside complicit government organizations working in collusion with dishonest corporations steeped in scientific fraud (Monsanto, Big Pharma, etc.). 2016 saw more science hoaxes than a typical year, with the media placing special emphasis on the Zika virus terror campaign (rooted in total scientific hucksterism) and more climate change propaganda (all based on fraudulently altered data). 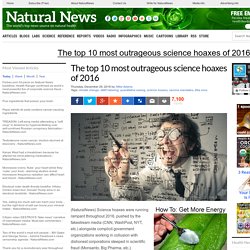 In every case, those pushing the science frauds claimed to have a divine monopoly on “science” while declaring all opposing views to be “unscientific.” Physicists have found hints of a rare 'quantum spin liquid' hiding in a crystal. Physicists have found evidence of quantum 'spookiness' going on inside a new type of exotic crystal, and say it could hint at an entire class of undiscovered materials that house a rarely encountered state of matter known as quantum spin liquid. 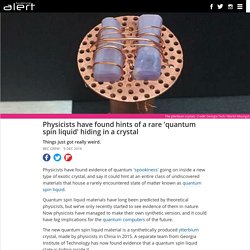 Quantum spin liquid materials have long been predicted by theoretical physicists, but we’ve only recently started to see evidence of them in nature. A New State Of Matter: Quantum Spin Liquids Explained. Magnetism is one of the oldest recognised material properties. 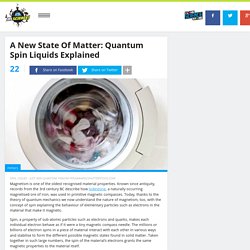 Known since antiquity, records from the 3rd century BC describe how lodestone, a naturally occurring magnetised ore of iron, was used in primitive magnetic compasses. Today, thanks to the theory of quantum mechanics we now understand the nature of magnetism, too, with the concept of spin explaining the behaviour of elementary particles such as electrons in the material that make it magnetic. Spin, a property of sub-atomic particles such as electrons and quarks, makes each individual electron behave as if it were a tiny magnetic compass needle.