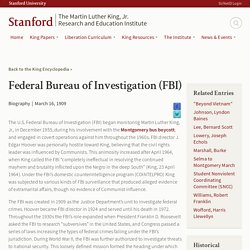 Federal Bureau of Investigation (FBI) began monitoring Martin Luther King, Jr., in December 1955, during his involvement with the Montgomery bus boycott, and engaged in covert operations against him throughout the 1960s. FBI director J. Edgar Hoover was personally hostile toward King, believing that the civil rights leader was influenced by Communists. FBI Quietly Ramps Up Biometrics Programs. By Jennifer Lynch In the last few years, FBI has been dramatically expanding its biometrics programs, whether by adding face recognition to its vast Next Generation Identification (NGI) database or pushing out mobile biometrics capabilities for “time-critical situations” through its Repository for Individuals of Special Concern (RISC). 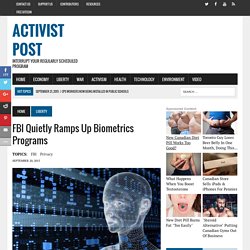 But two new developments—both introduced with next to no media attention—will impact far more every-day Americans than anything the FBI has done on biometrics in the past. FBI Combines Civil And Criminal Fingerprints Into One Fully Searchable Database Being a job seeker isn’t a crime. But the FBI has made a big change in how it deals with fingerprints that might make it seem that way. The change, which the FBI revealed quietly in a February 2015 Privacy Impact Assessment (PIA), means that if you ever have your fingerprints taken for licensing or for a background check, they will most likely end up living indefinitely in the FBI’s NGI database. The FBI Has Been Involved in Just About Every Terror Plot Since 9/11. By Joshua Krause Last Thursday the FBI arrested Joshua Ryne Goldberg for conspiring to bomb a 9/11 memorial service in Kansas City. 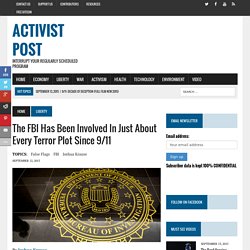 Goldberg however, appears to have been a complete idiot and an internet troll, and probably wouldn’t be able to pull off any act of terror without the support of an FBI informant. Unfortunately, this sort of thing has been going on for years and, truth be told, the vast majority of the terror plots that have been foiled by our government since 9/11 are complete shams. Trevor Aaronson, a journalist who has been investigating these cases, mentioned in a TED talk earlier this year that “The FBI is responsible for more terrorism plots in the United States than any other organization. More than al-Qaida, more than al-Shabaab, more than the Islamic State.” You’ll Be ENRAGED When You Find Out What the FBI Just Did– 30 Cities Targeted. Inside the FBI: The Secrets of the World's Most Powerful Law Enforcement Agency (1993) FBI — Administrative Policy/Procedures. The FBI’s FOIA Library contains many files of public interest and historical value. 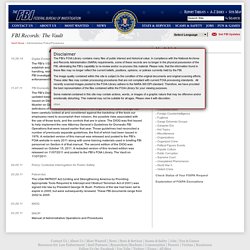 In compliance with the National Archives and Records Administration (NARA) requirements, some of these records are no longer in the physical possession of the FBI, eliminating the FBI’s capability to re-review and/or re-process this material. Please note, that the information found in these files may no longer reflect the current beliefs, positions, opinions, or policies currently held by the FBI. The image quality contained within this site is subject to the condition of the original documents and original scanning efforts. These older files may contain processing procedures that are not compliant with current FOIA processing standards. All recently scanned images posted to the FOIA Library adhere to the NARA 300 DPI standard. Some material contained in this site may contain actions, words, or images of a graphic nature that may be offensive and/or emotionally disturbing.

FBI joins DHS in unusual ammunition purchases. James SmithActivist Post While most Americans are being dealt blow after blow of arctic temperatures, and the White House blows $12,000 of taxpayer money on the Mrs. 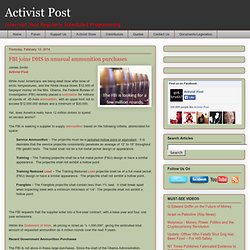 Obama, the Federal Bureau of Investigation (FBI) recently placed a solicitation for millions of rounds of .45 Auto ammunition, with an upper limit not to exceed $12,000,000 dollars and a minimum of $20,000. Yet, does America really have 12 million dollars to spend on excess ammo? The FBI is seeking a supplier to supply ammunition based on the following criteria, abbreviated for space: Service Ammunition – The projectile must be a jacketed hollow point or equivalent. Training – The Training projectile shall be a full metal jacket (FMJ) design or have a similar appearance.

Training Reduced Lead – The Training Reduced Lead projectile shall be of a full metal jacket (FMJ) design or have a similar appearance. Frangible – The Frangible projectile shall contain less than 1% lead. Recent Government Ammunition Purchases. Eyes in the Sky: FBI Is Operating Fleet of Surveillance Planes. By Lily Dane Not only is the FBI operating it’s own little air force of surveillance planes, the agency created at least thirteen fictitious companies to conceal the fleet’s purpose from the public. 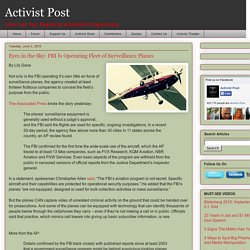 The Associated Press broke the story yesterday: The planes’ surveillance equipment is generally used without a judge’s approval, and the FBI said the flights are used for specific, ongoing investigations. In a recent 30-day period, the agency flew above more than 30 cities in 11 states across the country, an AP review found. FBI Chief exposes Satanism Pedophilia Elite Murder NWO Ted Gunderson Part 1 of 2 YouTube.