12,000 B.C. - China's First Alien Encounter - ARE THERE ALIENS AMONG US ???? - Care2.com. Description of an ancient aeroplane in Sanskrit. The Archons - Alien Invaders From Space‬‏ Most Puzzling Ancient Artifacts. “Ancient Aliens” 2010 Series: 1—10. 1 Manik (October 5) Known Alien Races of the Galaxy. Alien Devastations. AN EXAMINATION of 75 million years of the most credible alien evidence here on Earth, from the age of the dinosaurs, to ancient Egypt, to the skies over the western desert in the present day United States. 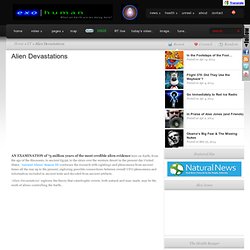 Coordinates: The complex was added to by many subsequent rulers, including Firoz Shah Tughlaq and Ala ud din Khilji as well as the British.[7] Other structures in the complex are the Qutb Minar, the Quwwat ul-Islam Mosque, the Alai Gate, the Alai Minar, the Iron pillar, and the tombs of Iltutmish, Alauddin Khilji and Imam Zamin, surrounded by Jain temple ruins.[3] Today, the adjoining area spread over with a host of old monuments, including Balban's tomb, has been developed by Archeological Survey of India (ASI) as the Mehrauli Archaeological Park, and INTACH has restored some 40 monuments in the Park.[8] It is also the venue of the annual 'Qutub Festival', held in November–December, where artists, musicians and dancers perform over three days. 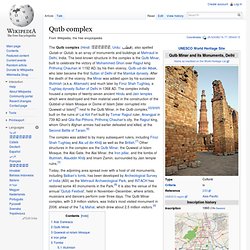 The Qutb Minar complex, with 3.9 million visitors, was India's most visited monument in 2006, ahead of the Taj Mahal, which drew about 2.5 million visitors.[9] Alai Darwaza[edit] The Real 4400 - Abductees Worldwide. Ufo's Aliens Contact (Full Documentary).mp4. Iron pillar of Delhi. Category:Ziggurats. UFOs The Best Evidence - Strange Encounters. Ley-lines. There are several developed theories on the purpose of ley-lines, many of which offer valid potential; something which in itself illustrates the complexity of unravelling the myriad of alignments from several millennia of activity. 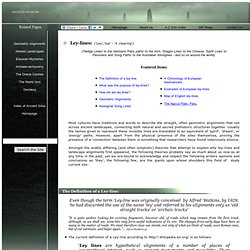 It is likely that ley-lines are a product of different elements from several of the following theories, being created at different times, for different purposes. The following examples are the current contenders for explaining how such a dedication to straight-lines has led mankind its present position. It is important to recognise the distinction between ley-lines and geometric alignments.

Spirit ways and Death roads - (Funerary paths): Although there is little direct evidence for 'religious' worship in the modern sense of the word at megalithic sites, there is certainly evidence that funerary rites were involved at several important locations (some of which may be classed a secondary use). Feng shui - (Earths Magnetic Field) Astronomical Alignments: 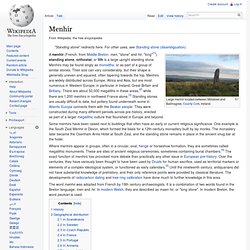 A menhir (French, from Middle Breton: men, "stone" and hir, "long"[1]), standing stone, orthostat, or lith is a large upright standing stone. Menhirs may be found singly as monoliths, or as part of a group of similar stones. Their size can vary considerably, but their shape is generally uneven and squared, often tapering towards the top. Menhirs are widely distributed across Europe, Africa and Asia, but are most numerous in Western Europe; in particular in Ireland, Great Britain and Brittany. There are about 50,000 megaliths in these areas,[2] while there are 1,200 menhirs in northwest France alone.[3] Standing stones are usually difficult to date, but pottery found underneath some in Atlantic Europe connects them with the Beaker people. Some menhirs have been raised next to buildings that often have an early or current religious significance.

Click "OK" to accept this setting, or click "Cancel" to set your location filter to "Worldwide". The location filter shows you popular videos from the selected country or region on lists like Most Viewed and in search results. Our True History - Pyramids and Sun-Gods by Nassim Haramein -1/4. Best UFO's Documentary - I Know What I Saw (2010) Marcia Schafer on The Hundredth Monkey Radio January 22 2012 Hour One.avi. Space Brother Contactees Part 1 of 5 - Howard Menger, Van Tassel & Dan Fry. Alien Life and Environments. Are we alone? 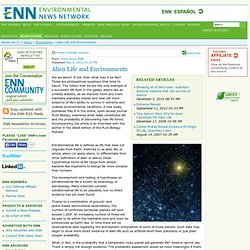 If not, then what may it be like? These are philosophical questions that tend to haunt. The notion that we are the only example of a successful life form in the galaxy seems like an unlikely statistic, as we discover more and more habitable planetary bodies and hear yet more evidence of life's ability to survive in extreme and unlikely environmental conditions. Our True History - Pyramids and Sun-gods by Nassim Haramein - 3/4. Special ops soldier w/top secret stealth INVISIBILITY suit! MUST SEE!!. 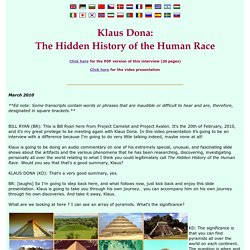 Dogon People of Africa. Ancient Aliens in Africa: The Dogon people are one of the most fascinating sources of evidence for Ancient Aliens. The Dogon populate the central plateau region of Mali in Africa, there are said to be between 400,000 and 800,000 in this remote civilization. The Dogon culture has been known for its dramatic art, tribal customs, and most of all their cosmology. The controversy started in 1930 when French anthropologists recorded a strange legend from Dogon priests. Who Are The Arcturian Aliens. Heliodorus pillar. The dedication of the Heliodorus pillar was made by Heliodorus, ambassador of the Indo-Greek king Antialcidas (here depicted on one of his coins). 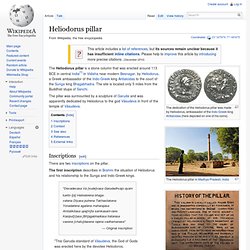 The pillar was surmounted by a sculpture of Garuda and was apparently dedicated by Heliodorus to the god Vāsudeva in front of the temple of Vāsudeva. Inscriptions[edit] There are two inscriptions on the pillar. Krill UFO Revelation. UFO-Phenomena: KRILL Papers A SITUATION REPORT ON OUR ACQUISITION OF ADVANCED TECHNOLOGY AND INTERACTION WITH ALIEN CULTURES Contents: It's one of posts who gave in alt.alien.visitors a lot of discussions and flames. 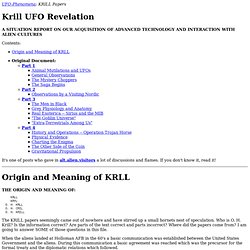 If you don't know it, read it! The KRILL papers seemingly came out of nowhere and have stirred up a small hornets nest of speculation. Ancient Aliens - S02E08 - Unexplained Structures(HQ) Egyptian Archaeologist Admits Pyramids Contain Alien Technology. UFO Aliens may have helped build Pyramids of Giza says, Cairo university archeologist Head of the Cairo University Archaeology Department, Dr Ala Shaheen in December 2010 had told an audience that there might be truth to the theory that aliens helped the ancient Egyptians build the oldest of pyramids, the Pyramids of Giza. 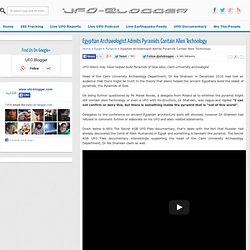 On being further questioned by Mr Marek Novak, a delegate from Poland as to whether the pyramid might still contain alien technology or even a UFO with its structure, Dr Shaheen, was vague and replied “I can not confirm or deny this, but there is something inside the pyramid that is “not of this world”. Delegates to the conference on ancient Egyptian architecture were left shocked, however Dr Shaheen had refused to comment further or elaborate on his UFO and alien related statements. 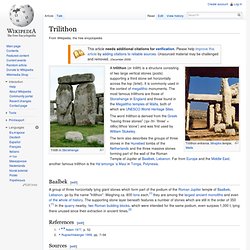