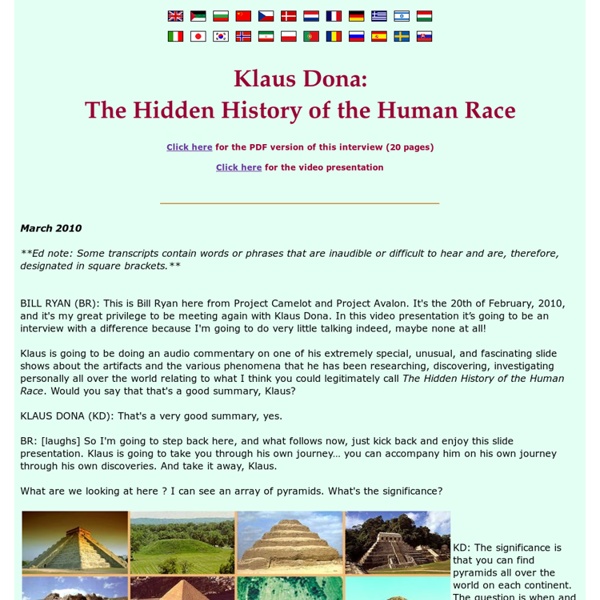 Click here for the PDF version of this interview (20 pages) Click here for the video presentation March 2010 **Ed note: Some transcripts contain words or phrases that are inaudible or difficult to hear and are, therefore, designated in square brackets.** BILL RYAN (BR): This is Bill Ryan here from Project Camelot and Project Avalon. Klaus is going to be doing an audio commentary on one of his extremely special, unusual, and fascinating slide shows about the artifacts and the various phenomena that he has been researching, discovering, investigating personally all over the world relating to what I think you could legitimately call The Hidden History of the Human Race. KLAUS DONA (KD): That's a very good summary, yes. BR: [laughs] So I'm going to step back here, and what follows now, just kick back and enjoy this slide presentation. What are we looking at here ? Ancient World Maps Ecuador Even the next one, [right, above] you can see how this statue is sitting. Bolivia Colombia Giants BR: Good!

Mystery Disks Alien Connection One of the news stories finding its way across the World Wide Web of late is about a team of Chinese scientists traveling to the remote western province of Qinghai to investigate reports of a mystery pyramid that local legend claims is an ancient launch tower left by aliens. Top 10 Mysteries Surrounding Ancient Aliens Mysteries Ancient aliens is the idea that aliens visited earth in the past. The idea of ancient aliens is not a new one either. Imagination is one of the most powerful tools in humanity’s evolutionary struggle for survival. As a race, we are hardwired to consider important concepts, such as the creation of life on Earth and the history of people on this planet. At some point, we are all presented with various explanations and theories regarding the expansion of human life on Earth.

Myth, Legend, Folklore, Ghosts - StumbleUpon Apollo and the Greek Muses Updated July 2010 COMPREHENSIVE SITES ON MYTHOLOGY ***** The Encyclopedia Mythica - SEARCH - Areas - Image Gallery - Genealogy tables - Mythic Heroes Probert Encyclopaedia - Mythology Gods, Heroes, and MythDictionary of Mythology What is Myth? MESOPOTAMIAN MYTHOLOGYThe Assyro-Babylonian Mythology FAQ Sumerian Mythology FAQ Sumerian Mythology Sumerian Gods and Goddesses Sumerian Myths SUMERIAN RELIGION Mythology's Mythinglinks: the Tigris-Euphrates Region of the Ancient Near East Gods, Goddesses, Demons and Monsters of Mesopotamia The Assyro-Babylonian Mythology FAQ More info on Ancient Mesopotamia can be found on my Ancient River Valley Civilizations page. This Awesome Urn Will Turn You into a Tree After You Die You don't find many designers working in the funeral business thinking about more creative ways for you to leave this world (and maybe they should be). However, the product designer Gerard Moline has combined the romantic notion of life after death with an eco solution to the dirty business of the actual, you know, transition. His Bios Urn is a biodegradable urn made from coconut shell, compacted peat and cellulose and inside it contains the seed of a tree. Once your remains have been placed into the urn, it can be planted and then the seed germinates and begins to grow. You even have the choice to pick the type of plant you would like to become, depending on what kind of planting space you prefer. I, personally, would much rather leave behind a tree than a tombstone.

Cameron refuses to apologise to Ukip David Cameron today refused to apologise for describing the UK Independence party as "fruitcakes", "loonies" and "closet racists". The Conservative leader's remarks came after Ukip threatened to use the Freedom of Information Act to force him to reveal the names of individuals who have secretly lent money to the Conservative party. "Ukip is sort of a bunch of ... fruitcakes and loonies and closet racists mostly," Mr Cameron told LBC radio.

Deadly time vortex appears over Antarctica Sector of erupting anomalies. Disturbing news has been leaking out from the giant continent at the bottom of the world. Some scientists manning lonely outposts under the drifting and shifting aurora are nearly paralyzed with fear. Their clipped reports are being reviewed by astonished superiors back in the home countries. Russian researchers posted near the giant South Pole sub-glacial Lake Vostok have reported eerie anomalies and incidents over the past few years that sometimes seem to border on the frayed edge of creeping madness.

Ancient underwater cities being found that are 10,000 years old Lost city 'could rewrite history' By BBC News Online's Tom Housden The remains of what has been described as a huge lost city may force historians and archaeologists to radically reconsider their view of ancient human history. Marine scientists say archaeological remains discovered 36 meters (120 feet) underwater in the Gulf of Cambay off the western coast of India could be over 9,000 years old. The vast city - which is five miles long and two miles wide - is believed to predate the oldest known remains in the subcontinent by more than 5,000 years.

Mercantilism in Spain The seeming prosperity and glittering power of Spain in the 16th century proved a sham and an illusion in the long run. For it was fuelled almost completely by the influx of silver and gold from the Spanish colonies in the New World. In the short run, the influx of bullion provided a means by which the Spanish could purchase and enjoy the products of the rest of Europe and Asia; but in the long run, price inflation wiped out this temporary advantage. The result was that when the influx of specie dried up, in the 17th century, little or nothing remained. Not only that — the bullion prosperity induced people and resources to move to southern Spain, particularly the port of Seville, where the new specie entered Europe. 47 Mind-Blowing Psychology-Proven Facts You Should Know About Yourself I’ve decided to start a series called 100 Things You Should Know about People. As in: 100 things you should know if you are going to design an effective and persuasive website, web application or software application. Or maybe just 100 things that everyone should know about humans!