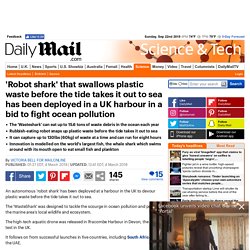 The 'WasteShark' was designed to tackle the scourge in ocean pollution and protect the marine area's local wildlife and ecosystem. The high-tech aquatic drone was released in lfracombe Harbour in Devon, the first test in the UK. It follows on from successful launches in five countries, including South Africa and the UAE. Scroll down for video An autonomous robot 'shark' has been deployed at a Devon harbour to eat up plastic waste before the tide takes it out to sea. WasteShark can 'swallow' up to 130lbs (60kg) of debris in one trip and if running five days a week could clear 15 tons of waste from waterways every year, according to experts. The device can roam distances of up to three miles (five kilometres), or for eight hours, before it needs to be charged. 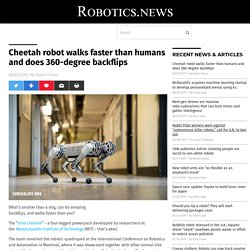 The “mini cheetah” – a four-legged powerpack developed by researchers at the Massachusetts Institute of Technology (MIT) – that’s what. The team unveiled the robotic quadruped at the International Conference on Robotics and Automation in Montreal, where it was showcased together with other animal-like robots like Boston Dynamics’ SpotMini and Unitree Robotics’ Laikago. The former, in particular, is already slated for commercial release, while the latter – an homage to the Russian cosmonaut dog Laika – is already being tested in universities. Construction Robots Learn To Excavate By Mimicking Humans IEEE Spectrum. Pavel Savkin remembers the first time he watched a robot imitate his movements. 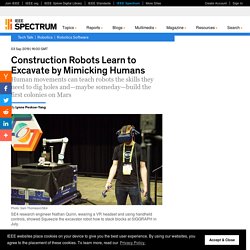 Minutes earlier, the engineer had finished “showing” the robotic excavator its new goal by directing its movements manually. Now, running on software Savkin helped design, the robot was reproducing his movements, gesture for gesture. “It was like there was something alive in there—but I knew it was me,” he said. Water Jet Powered Drone Takes Off With Explosions IEEE Spectrum. At ICRA 2015, the Aerial Robotics Lab at the Imperial College London presented a concept for a multimodal flying swimming robot called AquaMAV. 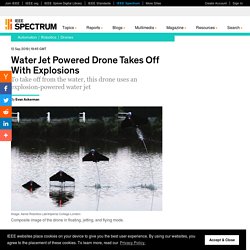 The really difficult thing about a flying and swimming robot isn’t so much the transition from the first to the second, since you can manage that even if your robot is completely dead (thanks to gravity), but rather the other way: going from water to air, ideally in a stable and repetitive way. Video Friday: Watch This Robot Dog Explore An Underground Tunnel Autonomously IEEE Spectrum. Video Friday is your weekly selection of awesome robotics videos, collected by your Automaton bloggers. 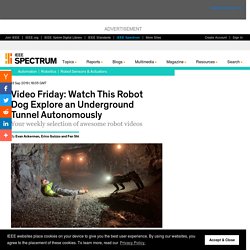 This Startup Is Building Giant Robots To Grow Our Food IEEE Spectrum. We humans spend most of our time getting hungry or eating, which must be really inconvenient for the people who have to produce food for everyone. 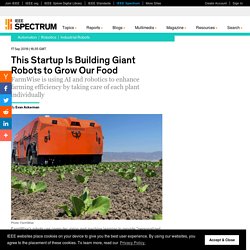 For a sustainable and tasty future, we’ll need to make the most of what we’ve got by growing more food with less effort, and that’s where the robots can help us out a little bit. FarmWise, a California-based startup, is looking to enhance farming efficiency by automating everything from seeding to harvesting, starting with the worst task of all: weeding. And they’ve just raised US $14.5 million to do it. FarmWise’s autonomous, AI-enabled robots are designed to solve farmers’ most pressing challenges by performing a variety of farming functions - starting with weeding, and providing personalized care to every plant they touch. This Startup Is Building Giant Robots To Grow Our Food IEEE Spectrum. Boston Dynamics is changing your idea of what robots can do. Boston Dynamics. Open-Source CNC Farming.

Desktop Companion Robot #PanasonicCES 2017. Aido - Friendly & Smart Home Robot. 15 Small Robots That Will Invade Your Home Sooner Than You Think. Many of us grew up watching the incredible potential of robots in movies and television. 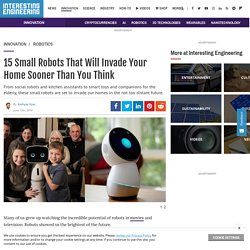 Robots showed us the brightest of the future. However, we haven’t really seen the true potential of robotic technology being unleashed. While the popular TV cartoon show, Jetsons from the 60’s showed us the infinite possibilities of humans and robots co-existing, movies like the Terminator or Wall-E scared us by showing the prospective dark side of Artificial Intelligence and technology.

But the age where robots finally coexist with human beings is not really far. Here we look at the 15 small robots that will probably invade your home sooner than you think. 1. Jibo is a cute little social robot with a ‘personality’ which can easily become a family’s best friend. Aeolus Robotics: The Dream Comes To Life. Home Connect presents: Your Personal Kitchen Assistant Mykie! (Concept)