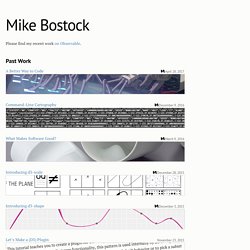 As data visualization often needs to reach a broad audience the browser is becoming the number one tool to publish and share visualizations. 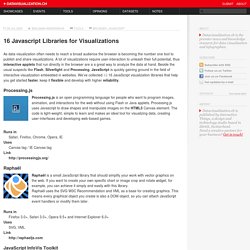 A lot of visualizations require user-interaction to unleash their full potential, thus interactive applets that run directly in the browser are a a great way to analyze the data at hand. Beside the usual suspects like Flash, Silverlight and Processing, JavaScript is quickly gaining ground in the field of interactive visualization embedded in websites. We’ve collected 13 16 JavaScript visualization libraries that help you get started faster, keep it flexible and develop with higher reliability. Processing.js Processing.js is an open programming language for people who want to program images, animation, and interactions for the web without using Flash or Java applets. Runs in. JavaScript Charts and Maps Demos. Column & Bar. 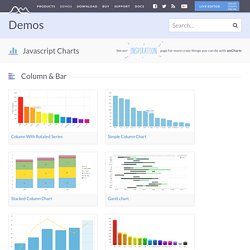 Neural networks and deep learning. The human visual system is one of the wonders of the world. 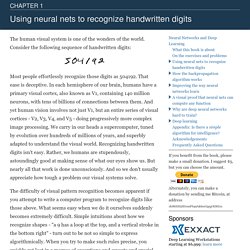 Consider the following sequence of handwritten digits: Most people effortlessly recognize those digits as 504192. That ease is deceptive. In each hemisphere of our brain, humans have a primary visual cortex, also known as V1, containing 140 million neurons, with tens of billions of connections between them. And yet human vision involves not just V1, but an entire series of visual cortices - V2, V3, V4, and V5 - doing progressively more complex image processing. The difficulty of visual pattern recognition becomes apparent if you attempt to write a computer program to recognize digits like those above. Neural networks approach the problem in a different way.

And then develop a system which can learn from those training examples. In this chapter we'll write a computer program implementing a neural network that learns to recognize handwritten digits. Perceptrons. LogMeIn Hamachi. LogMeIn Hamachi is intended as a zero-configuration virtual private network (VPN) application that is capable of establishing direct links between computers that are behind NAT firewalls without requiring reconfiguration (when the user's PC can be accessed directly without relays from the Internet/WAN side); in other words, it establishes a connection over the Internet that emulates the connection that would exist if the computers were connected over a local area network. 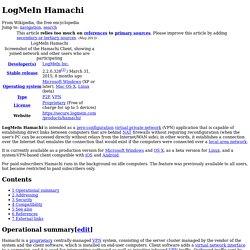 For paid subscribers Hamachi runs in the background on idle computers. The feature was previously available to all users, but became restricted to paid subscribers only. Operational summary[edit] Each client establishes and maintains a control connection to the server cluster. When the connection is established, the client goes through a login sequence, followed by the discovery process and state synchronization. Hamachi is frequently used for gaming and remote administration. Addressing[edit] Security[edit] See also[edit] Buy a CrashPlan Subscription or Other Backup Solutions - CrashPlan.