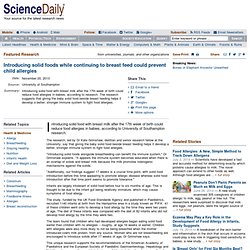 The research, led by Dr Kate Grimshaw, dietitian and senior research fellow at the University, say that giving the baby solid food beside breast feeding helps it develop a better, stronger immune system to fight food allergies. Why Are Trace Chemicals Showing Up in Umbilical Cord Blood? Dear EarthTalk: A few years back a study found over 200 chemicals in the umbilical cords of newborns, particularly African-American, Asian and Hispanic babies. 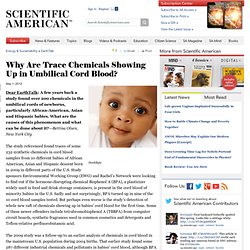 What are the causes of this phenomenon and what can be done about it? —Bettina Olsen, New York City. Infant Formula Manufacturers Refuse To Remove GMO And New Research Now Links Formula To Chronic Disease. June 14, 2013 by NATASHA LONGO. 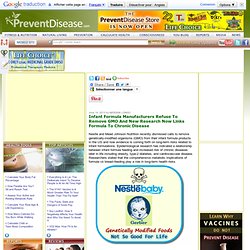 Hazelnuts: New source of key fat for infant formula that's more like mother's milk. Scientists are reporting development of a healthy "designer fat" that, when added to infant formula, provides a key nutrient that premature babies need in high quantities, but isn't available in large enough amounts in their mothers' milk. 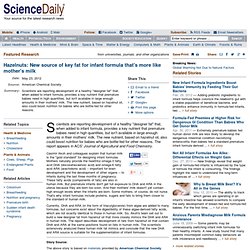 The new nutrient, based on hazelnut oil, also could boost nutrition for babies who are bottle-fed for other reasons. The report appears in ACS' Journal of Agricultural and Food Chemistry. Casimir Akoh and colleagues explain that human milk is the "gold standard" for designing infant formulas. Mothers naturally provide the healthful omega-3 fatty acid DHA (docosahexaenoic acid) and omega-6 fatty acid ARA (arachidonic acid) -- important for brain development and the development of other organs -- to infants during the last three months of pregnancy. These fatty acids (components of fats) are also in human milk. CDC Study Finds Rocket Fuel Chemical in Baby Formula. Perchlorate, a hazardous chemical in rocket fuel, has been found at potentially dangerous levels in powdered infant formula, according to a study (pdf) by a group of U.S. 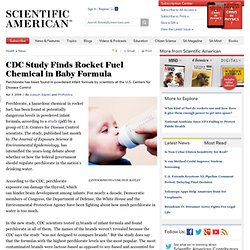 Centers for Disease Control scientists. The study, published last month by The Journal of Exposure Science & Environmental Epidemiology, has intensified the years-long debate about whether or how the federal government should regulate perchlorate in the nation’s drinking water. Risks and ethics of breastmilk substitutes. “Infants who are not breastfed, for whatever reason, should receive special attention from the health and social welfare system since they constitute a risk group,” says the WHO. 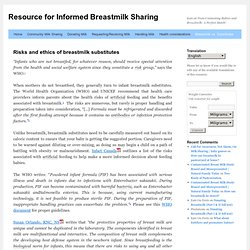 When mothers do not breastfeed, they generally turn to infant breastmilk substitutes. The World Health Organization (WHO) and UNICEF recommend that health care providers inform parents about the health risks of artificial feeding and the benefits associated with breastmilk. The risks are numerous, but rarely is proper handling and preparation taken into consideration, “[...] Dangers of Milk. Why Cows' Milk is Unhealthy.

Vegetarian Starter Kit. Calcium: Green vegetables, such as kale and broccoli, are better than milk as calcium sources. Fat Content*: Dairy products—other than skim varieties—are high in fat, as a percentage of total calories. Iron-Deficiency: Milk is very low in iron. To get the U.S. Recommended Dietary Allowance of 11 milligrams of iron, an infant would have to drink more than 22 quarts of milk each day. Milk also causes blood loss from the intestinal tract, depleting the body’s iron. Ideas for Delicious Dairy-Free Dining. Dairy: Essential Nutrition or Health Saboteur? Cow’s Milk-Induced Infant Apnea. The Downside to Feeding Your Child Cow's Milk. By Linda Folden Palmer, D.C.Excerpted with permission.To read more from Palmer, please visit her website and see her latest book, The Baby Bond: The New Science Behind What's Really Important When Caring for Your Baby. cow milk is designed perfectly for baby cows ~ not baby humans. 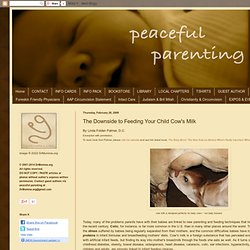 Too Much Calcium For Children. The mineral, calcium, comes from many dietary sources. 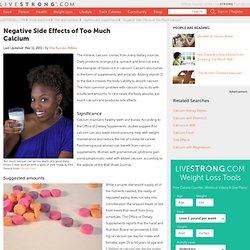 Dairy products, orange juice, spinach and broccoli are a few examples of foods rich in calcium. Calcium also comes in the form of supplements and antacids. Adding vitamin D to the diet increases the body's ability to absorb calcium. The most common problem with calcium has to do with insufficient amounts. In rare cases, the body absorbs too much calcium and produces side effects. Calcium maintains healthy teeth and bones. While a proper diet would supply all of the nutrients needed, the reality of regulated eating does not take into consideration the skipped meals or fast food meals that result from busy schedules. Strong Bones / a Physicians Committee for Responsible Medicine (PCRM) Site. The Best Baby Formula. Safety of Soy-Based Infant Formulas Containing Isoflavones: The Clinical Evidence.

Soy-based infant formulas (SBIFs)3 have a long history of safe use in the United States and around the world. 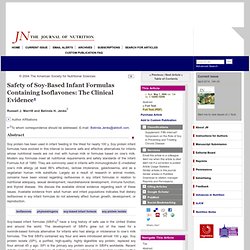 The development of SBIFs grew out of the need for a nonmilk-based formula alternative for infants who had allergy or intolerance to cow’s milk formulas. The first SBIFs contained soy flour and were introduced almost 100 y ago. Soy protein isolate (SPI), a purified, high-quality, highly digestible soy protein, replaced soy flour almost 45 y ago. SPI is the primary soy protein source in SBIFs worldwide. Features - Cronobacter Illness and Infant Formula. Learn About Cronobacter Infection Cronobacter: A group of bacteria found in the environment and foods. 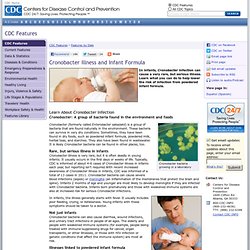 In vitro study finds digested formula, but not breast milk, is toxic to cells. Free fatty acids created during the digestion of infant formula cause cellular death that may contribute to necrotizing enterocolitis, a severe intestinal condition that is often fatal and occurs most commonly in premature infants, according to a study by University of California, San Diego bioengineers. Their report, which was based on in vitro tests comparing the digestion of fresh human breast milk and nine different infant formulas, was published online in the journal Pediatric Research. Dairy.