Hallucinogen. Dissociative. Opioid. An opioid is any chemical that resembles morphine or other opiates in its pharmacological effects. 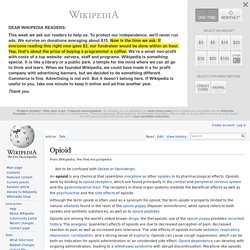 Opioids work by binding to opioid receptors, which are found principally in the central and peripheral nervous system and the gastrointestinal tract. The receptors in these organ systems mediate the beneficial effects as well as the psychoactive and the side effects of opioids. Although the term opiate is often used as a synonym for opioid, the term opiate is properly limited to the natural alkaloids found in the resin of the opium poppy (Papaver somniferum), while opioid refers to both opiates and synthetic substances, as well as to opioid peptides. Opioids are among the world's oldest known drugs; the therapeutic use of the opium poppy predates recorded history.

The analgesic (painkiller) effects of opioids are due to decreased perception of pain, decreased reaction to pain as well as increased pain tolerance. Salvinorin A. Salvinorin A is the main active psychotropic molecule in Salvia divinorum, a Mexican plant which has a long history of use as an entheogen by indigenous Mazatec shamans. 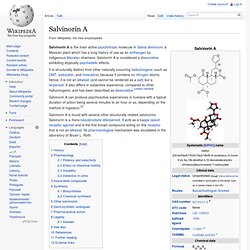 Salvinorin A is considered a dissociative exhibiting atypically psychedelic effects. Salvinorin A can produce psychoactive experiences in humans with a typical duration of action being several minutes to an hour or so, depending on the method of ingestion.[2] Ibotenic acid. Ibotenic acid is a chemical compound that is naturally occurring in the mushrooms Amanita muscaria and Amanita pantherina, among others. 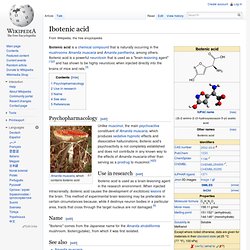 Ibotenic acid is a powerful neurotoxin that is used as a "brain-lesioning agent"[1][2] and has shown to be highly neurotoxic when injected directly into the brains of mice and rats.[3] Psychopharmacology[edit] Unlike muscimol, the main psychoactive constituent of Amanita muscaria, which produces sedative-hypnotic effects and dissociative hallucinations, ibotenic acid's psychoactivity is not completely established and does not contribute in any known way to the effects of Amanita muscaria other than serving as a prodrug to muscimol.[4][5] NMDA receptor antagonist. Ketamine, one of the most common NMDA receptor antagonists. 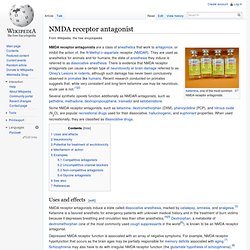 NMDA receptor antagonists are a class of anesthetics that work to antagonize, or inhibit the action of, the N-Methyl-D-aspartate receptor (NMDAR). They are used as anesthetics for animals and for humans; the state of anesthesia they induce is referred to as dissociative anesthesia. There is evidence that NMDA receptor antagonists can cause a certain type of neurotoxicity or brain damage referred to as Olney's Lesions in rodents, although such damage has never been conclusively observed in primates like humans. Recent research conducted on primates suggests that, while very consistent and long-term ketamine use may be neurotoxic, acute use is not.[1][2] Morphinan. Morphinan is the base chemical structure of a large chemical class of psychoactive drugs, consisting of opiate analgesics, cough suppressants, and dissociative hallucinogens, among others. 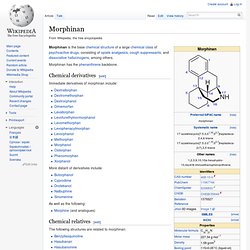 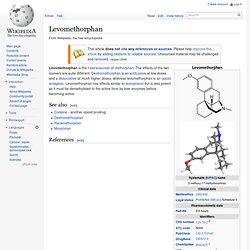 The effects of the two isomers are quite different. Dextromethorphan is an antitussive at low doses and a dissociative at much higher doses, whereas levomethorphan is an opioid analgesic. Levomethorphan has effects similar to levorphanol but is less potent as it must be demethylated to the active form by liver enzymes before becoming active. See also[edit] Dimemorfan. Dimemorfan is an antitussive or cough suppressant which acts as a sigma receptor agonist.[1][2] It is an analogue of dextromethorphan and dextrorphan, but lacks significant NMDA receptor antagonistic action and dissociative effects, thereby having reduced abuse potential and adverse effects in comparison.[3] See also[edit] References[edit] Jump up ^ Wang, H. 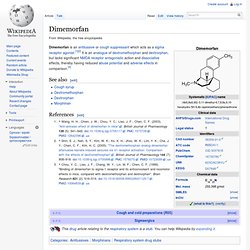 H.; Chien, J. W.; Chou, Y. Dextrorphan. Dextrorphan (DXO) is a psychoactive drug of the morphinan chemical class which acts as an antitussive or cough suppressant and dissociative hallucinogen. 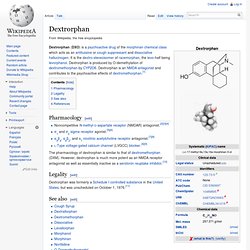 It is the dextro-stereoisomer of racemorphan, the levo-half being levorphanol. Methorphan. Methorphan comes in two isomeric forms, each with differing pharmacology and effects: Racemethorphan refers to the racemic mixture of both of these stereoisomers. 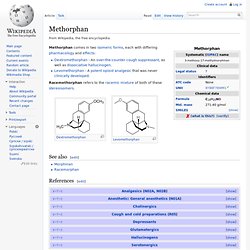 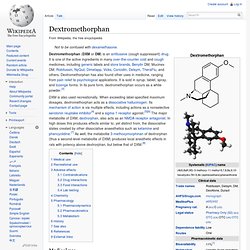 It is one of the active ingredients in many over-the-counter cold and cough medicines, including generic labels and store brands, Benylin DM, Mucinex DM, Robitussin, NyQuil, Dimetapp, Vicks, Coricidin, Delsym, TheraFlu, and others. Dextromethorphan has also found other uses in medicine, ranging from pain relief to psychological applications.

It is sold in syrup, tablet, spray, and lozenge forms. In its pure form, dextromethorphan occurs as a white powder.[3] DXM is also used recreationally. Medical use[edit] Generic Dextromethorphan syrup. The primary use of dextromethorphan is as a cough suppressant, for the temporary relief of cough caused by minor throat and bronchial irritation (such as commonly accompanies the flu and common cold), as well as those resulting from inhaled particle irritants.[9] Dextromethorphan has been shown to be effective in treating opioid withdrawal. 2-MDP. 2-MDP (U-23807A) is a dissociative anaesthetic drug which has been found to be an NMDA antagonist and produces similar effects to PCP in animals.

The levo or (-) isomer is the active form of the drug.[1][2] It also has stimulant effects, having only around one third the potency of amphetamine by weight, but with a long duration of action, lasting more than 24 hours from a single oral dose.[3] Jump up ^ Tang AH, Cangelosi AA, Code RA, Franklin SR. 8A-PDHQ. 8a-Phenyldecahydroquinoline (8A-PDHQ) is a high affinity NMDA antagonist developed by a team at Parke Davis in the 1950s.[1] It is a structural analog of Phencyclidine with slightly lower binding affinity than the parent compound. (-)-8a-Phenyldecahydroquinoline has an in vivo potency comparable to that of (+)-MK-801.[2][3] Jump up ^ US Patent 3035059Jump up ^ Chen C, Kozikowski AP, Wood PL, Reynolds IJ, Ball RG, Pang YP (1992).

Aptiganel. Aptiganel (Cerestat; CNS-1102) is a drug which acts as a noncompetitive NMDA antagonist.[1] It has neuroprotective effects and was researched for potential use in the treatment of stroke,[2] but despite positive results in animal studies,[3] human trials showed limited efficacy,[4] as well as undesirable side effects such as sedation and hallucinations,[5][6] and clinical development was ultimately not continued.[7] Synthesis[edit] See also[edit] Ditolylguanidine.

Etoxadrol. Etoxadrol (CL-1848C) is a dissociative anaesthetic drug that has been found to be an NMDA antagonist and produce similar effects to PCP in animals.[1][2] Etoxadrol, along with another related drug dexoxadrol, were developed as analgesics for use in humans, but development was discontinued in the late '70s after patients reported side effects such as nightmares and hallucinations.[3][4][5] Chemical structure[edit] Phenicyclidine (PCP), tenocyclidine (TCP), ketamine, etoxadrol and dexoxadrol all contain phenyl and amino groups, which bind to the PCP site on the NMDA receptor.

Phenicyclidine (PCP), tenocyclidine (TCP), etoxadrol and its precursor, dexoxadrol have related chemical structures.[6] These drugs all act similarly on the nervous system, acting as dissociative hallucinogens (meaning that they interfere with normal sensory signals, replacing them with hallucinations of any sensory modality) with anesthetic and analgesic properties.

Arylcyclohexylamine. 4-MeO-PCP. Tiletamine. Tenocyclidine. Rolicyclidine. Rolicyclidine (PCPy) is a dissociative anesthetic drug with hallucinogenic and sedative effects. It is similar in effects to phencyclidine but is slightly less potent and has less stimulant effects [1] instead producing a sedative effect described as being somewhat similar to a barbiturate, but with additional PCP-like dissociative, anaesthetic and hallucinogenic effects.[2] Due to its similarity in effects to PCP, PCPy was placed into the Schedule I list of illegal drugs in the 1970s, although it has never been widely abused and is now little known. Phencyclidine. Neramexane. Methoxetamine. Ketamine. Gacyclidine. Eticyclidine. Dieticyclidine. Esketamine. Nitrous oxide. Dexoxadrol. Dizocilpine. Adamantane. Rimantadine. Memantine. Amantadine. Dimemorfan. Noscapine. Psychedelic drug. Ergoline. Lysergic acid diethylamide.