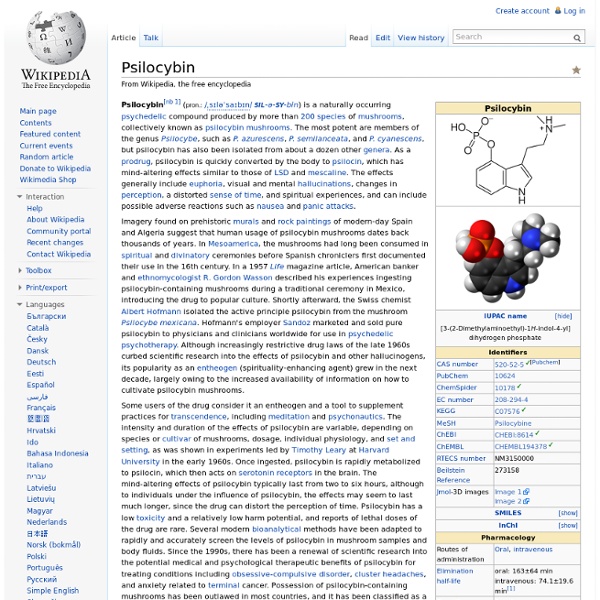 Psilocybin[nb 1] (/ˌsɪləˈsaɪbɪn/ SIL-ə-SY-bin) is a naturally occurring psychedelic compound produced by more than 200 species of mushrooms, collectively known as psilocybin mushrooms. The most potent are members of the genus Psilocybe, such as P. azurescens, P. semilanceata, and P. cyanescens, but psilocybin has also been isolated from about a dozen other genera. As a prodrug, psilocybin is quickly converted by the body to psilocin, which has mind-altering effects similar (in some aspects) to those of LSD, mescaline, and DMT. In general, the effects include euphoria, visual and mental hallucinations, changes in perception, a distorted sense of time, and spiritual experiences, and can include possible adverse reactions such as nausea and panic attacks. History[edit] Early[edit] Modern[edit] Albert Hofmann (shown here in 1993) purified psilocybin and psilocin from Psilocybe mexicana in the late 1950s. Occurrence[edit]

An overview on how to find Psilocybin Mushrooms. - Mushroom Hunting and Identification An overview on how to find Psilocybin MushroomsLast updated 4/17/2010 The reason for writing this guide is that a large percentage of new mushroom hunters go about the process completely backwards. Tromping around, picking a random mushroom, and then asking if it is a psychedelic type is a great waste of time for both the hunter and the friendly folks who frequent these boards trying to help ID them. Randomly picking a mushroom and finding a psychedelic one with no prior knowledge about it is right up there with winning the lottery. Step 1: Know your location. What state are you in? Step 2: Know your mushroom. Now that you’ve got a list of mushrooms that grow in your area, it’s time to put in a little book learning and effort. Important things to note while reading their descriptions:Where do they grow? Armed with all of your new found knowledge, pick a place that you think will yield some likely results and go hunting!. Step 4: Know your camera. Step 6: Know your posting skills.

Mushroom Info Our complete collection of psychedelic mushrooms information. Documents about experiencing shrooms safely and a great introduction to the Shroomery. An Introduction A document to welcome newcomers to the Shroomery and let them in on what's going on. Psilocybe Mushroom FAQ 4.50 A collection of frequently asked questions for those wanting to learn about psilocybe mushrooms. Psilocybin mushrooms in my area. Throughout the world the species Panaeolus cinctulus (= P. subbalteatus) and several active species of Gymnopilus grow. Rather than create entries for countries, states and provinces which would then have nothing else listed, it is probably a good assumption that these mushrooms grow in those places not listed. If they are not listed for your area, mentally add it. When researching your mushrooms be aware that many have more than one name. It may be that two names that were thought to be different were shown to describe the same fungus, or that it was moved to a new genus, or a whole host of reasons. For example the mushroom Panaeolus cyanescens was once placed in the genus Copelandia and you will therefore sometimes see it written as Coplandia cyanescens. Amanita muscaria can be found in all 50 states and in most countries.Though Psychoactive, it is not a psilocybin mushroom so it does not appear in this list. 'Sp.' ArkansasGymnopilus sp.Panaeolus cinctulusPsilocybe cubensis Africa Asia

Psilocin Psilocin (also known as 4-OH-DMT, psilocine, psilocyn, or psilotsin), is a substituted tryptamine alkaloid and a serotonergic psychedelic substance. It is present in most psychedelic mushrooms together with its phosphorylated counterpart psilocybin. Psilocin is a Schedule I drug under the Convention on Psychotropic Substances.[2] The mind-altering effects of psilocin are highly variable and subjective and resemble those of LSD and DMT. Chemistry[edit] Psilocin and its phosphorylated cousin, psilocybin, were first isolated and named in 1958 by Swiss chemist Albert Hofmann. Hofmann obtained the chemicals from laboratory-grown specimens of the entheogenic mushroom Psilocybe mexicana. Psilocin is relatively unstable in solution due to its phenolic hydroxy (-OH) group. Structural analogs[edit] Pharmacology[edit] Psilocin is the pharmacologically active agent in the body after ingestion of psilocybin or some species of psychedelic mushrooms. Psilocin's half-life ranges from 1 to 3 hours.[1]

Making Spore Prints Making Spore Prints by Michael Kuo While a single mushroom spore can't be seen by the naked eye, a pile of many spores can--and the color of a mushroom's spores, seen en masse, is a crucial identification feature. Obtaining a mushroom's "spore print" is therefore an essential step in the identification process. Before going through the nuts and bolts of making a spore print at home, it is worth noting that mushrooms frequently make their own spore prints, in nature. In order to make a spore print at home, you will need to have a relatively mature mushroom. Remove the stem from smaller mushrooms and place the cap, gills or pores downward, on a piece of paper or glass. While some spore prints can appear within a few hours, it's often best to wait overnight, just to be sure. Some field guides advocate using black paper for spore prints, since white prints show up more easily. The color of the spore print is what you will compare with descriptions from field guides and keys.

Online Books : "TIHKAL" - #18 4-HO-DMT SYNTHESIS : To a solution of 0.50 g 4-acetoxyindole (see preparation in the recipe for 4-HO-DET) in 4 mL Et2O, that was stirred and cooled with an external ice bath, there was added, dropwise, a solution of 0.5 mL oxalyl chloride in 3 mL anhydrous Et2O. Stirring was continued for 0.5 h and the intermediate indoleglyoxylchloride separated as a yellow crystalline solid but it was not isolated. There was then added, dropwise, a 40% solution of dimethylamine in Et2O until the pH came to 8-9. The reaction was then quenched by the addition of 100 mL CHCl3, and the organic phase was washed with 30 mL of 5% NaHSO4 solution, with 30 mL of saturated NaHCO3, and finally with 30 mL of saturated brine. After drying with anhydrous MgSO4, the solvent was removed under vacuum. A suspension of 0.38 g LAH in 10 mL anhydrous THF was held in an inert atmosphere and vigorously stirred. Most of the early syntheses of psilocin and psilocybin employ the O-benzyl ether as a protecting group. Another aside.

Psilocin Psilocin is Schedule I in the United States. This means it is illegal to manufacture, buy, possess, or distribute without a DEA license. Not available by prescription. Fresh and dried psilocin-containing mushrooms are considered containers of psilocin, making them illegal to possess as well. Addictive Potential: None Emergency Room Visits Yearly: Unknown Mandatory Minimum Sentence: Unknown Mechanism of Action: Agonist of the serotonin receptors, at 5-HT2A and 5-HT2C, among others (see a more detailed discussion below) Overview: Psilocin is also known as 4-hydroxy-N,N-dimethyltryptamine and 4-HO-DMT. Mushrooms containing psilocybin and/or psilocin are available fresh or dried and are typically taken orally. Pharmacology: The graph below (Ray, 2010) shows the affinity of psilocin for forty-two receptors, arranged in order of decreasing affinity (click the image to enlarge). Side Effects and Adverse Reactions: Research: Other Informational Resources:

Dr. Albert Hofmann | Psilocybin | Psilocin Dr. Albert Hofmann, the brilliant Swiss chemist, philosopher, author, and retired Director of the Pharmaceutical-Chemical Research Laboratories of Sandoz Ltd., Basel, is best known for fathering his "problem child," LSD, on April 19, 1943. Thirteen years later, a brief article in a local paper caught his eye. The article stated that a researcher from America had traveled to southern Mexico and participated in a native ritual where mushrooms were consumed that produced strange visions. Already intimately acquainted with the molecular structures of the known psychedelics, Dr. A year later Dr. Dr. In 1956, Moore, who was in reality a CIA operative specializing in the synthesis of psychoactive and chemical weapons for the CIA, offered R. Above: Molecular structures of LSD and psilocybin, written by Dr. Fortunately, Moore's efforts were unsuccessful and the honor, deservedly, went to Dr. Figure 1. Dr. Figure 2. Figure 3. Interestingly, in 1962 Dr. Now in his 90s, Dr. Above: Dr. Figure 4a.

Disregard Everything I Say - Psilocin (mushrooms), broken down and described Onset : 60 - 120 minutesDuration : 2 - 6 hoursNormal After Effects : up to 8 hours Threshold : .25 - 1 gLight : 1 - 2.5 gCommon : 2.5 - 3.5 gStrong : 3.5 - 5 gHeavy : 5 g + (Mushrooms) Psilocin is a naturally occurring tryptamine psychedelic found within approximately 190 separate species of mushroom and growing on every continent across the planet. There are two separate chemicals found within mushrooms in roughly equal amounts. The psilocin experience contains a complex and wide array of effects which based on the predefined potential subjective effects index found here, I will now begin to breakdown and describe the chemical. Physical Effects: The physical effects of Psilocin can be broken down into two components all of which progressively intensify proportional to dosage. Spontaneous tactile sensations - The body high of psilocin can be described as a pleasurable, warm, soft and all-encompassing tingling sensation. Cognitive Effects: Visual Effects: Enhancements Distortions Geometry