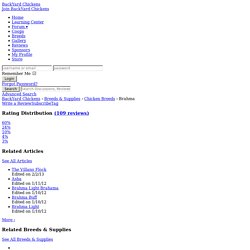 Cons: Pretty much stopped laying during first winter. Went from 8 eggs a day to lucky to get 1. But they were molting, so, it was expected. 5/23/14: I LOVE my dark brahma's! I would like to get some blues, but probably never going to happen, at least in my area. 10/8/2014: I bought 9 more dark brahma chicks this year! Chinese Geese - The Livestock Conservancy.

CottonPatch Conservancy. Once commonplace on farms in the southeastern United States., the Cotton Patch is a breed of goose that gets its name from the job it performed. 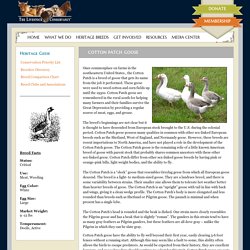 These geese were used to weed cotton and corn fields up until the 1950s. Cotton Patch geese are remembered in the rural south for helping many farmers and their families survive the Great Depression by providing a regular source of meat, eggs, and grease. Goosegrass, Cleavers, Bedstraw. Galium gallops in and out of season. 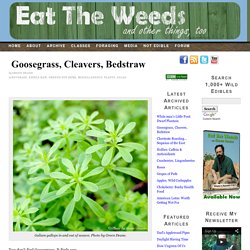 Photo by Green Deane. You don’t find Goosegrass. It finds you. Goosegrass, Galium aspirine Covered with a multitude of small hooks, Goosegrass, Galium aparine (GAY-lee-um ap-ar-EYE-nee) clings onto almost everything it touches. Young tips raw or boiled 10 to 15 minutes make an excellent green and the seeds roasted are one of perhaps two plants that actually makes a coffee-tasting coffee substitute (without caffeine.) 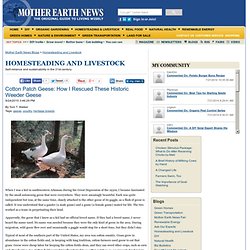 Copper Creek Ranch - Chocolate Turkey, Ancona Ducks, Cotton Patch Geese. Our Ameraucana Rooster, Randall and a few of his ladies.We are will start hatching the end of January 2014. 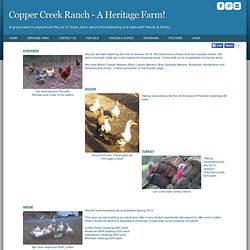 Gray Geese. By Craig Russell with permission fromSPPA Bulletin, 2004, 9(2):14 The American Gray goose is simply a larger version of the Western Gray. 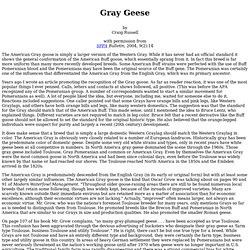 While it has never had an official standard it shows the general conformation of the American Buff goose, which essentially sprang from it. In fact this breed is far more uniform than many more recently developed breeds. Some American Buff strains were perfected with the use of Buff Pomeranian blood and the Pomeranians may have been the original source of the Buff gene. Years ago I wrote an article promoting the recognition of the Gray goose. It does make sense that a breed that is simply a large domestic Western Graylag should match the Western Graylag in color. The American Gray is predominately descended from the English Gray (in its early or original form) but with at least some other largely similar influences. Pilgrim Geese. Pilgrim GeesePhoto courtesy of Stephane Deshaies This is one of the autosexing geese: males are all white with blue eyes; females grey with some white on the head and brown eyes. 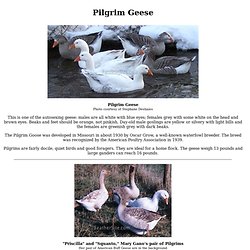 Beaks and feet should be orange, not pinkish. Day-old male goslings are yellow or silvery with light bills and the females are greenish grey with dark beaks. The Pilgrim Goose was developed in Missouri in about 1930 by Oscar Grow, a well-known waterfowl breeder. The breed was recognized by the American Poultry Association in 1939.

Which goose breed is best for small and backyard poultry flocks? Europeans raised domestic geese for both food and feathers long before settlers brought them to America. 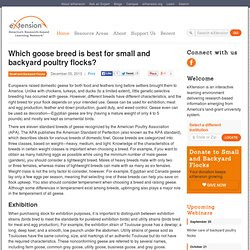 Unlike with chickens, turkeys, and ducks (to a limited extent), little genetic selective breeding has occurred with geese. Toulouse Geese. Hatching March to June. 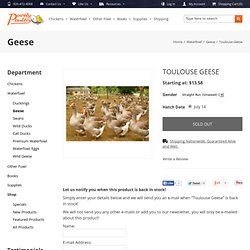 French Toulouse Geese have several attributes that recommend them. They are one of the calmest breeds of geese, they are heavy, and they are interesting to look at. Production: The Production-type Toulouse weighs 18-26 pounds at maturity and lays 20-40 eggs per year. Temperament: Geese in general are not known for being “friendly,” but the Toulouse has been domesticated for hundreds of years and it much calmer than many other breeds of geese. Some owners report that they sometimes prefer the company of ducks to that of other, more aggressive breeds of geese. History: The Toulouse is a very old breed, originating in the region around Toulouse, in Western France, and is descended directly from the Western Greylag.

Colors: The most common color in all three types is gray, but a buff version of the Exhibition type has been developed as well. Body Type: The Toulouse is a wide bird, with an oval head and heavy body. The Livestock Conservancy Shetland Greese. Raising Geese. By Diane Schivera, M.A.T. 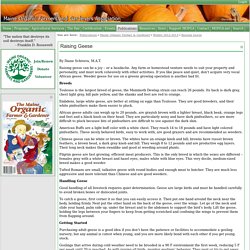 Raising geese can be a joy – or a headache. Any farm or homestead venture needs to suit your property and personality, and must work cohesively with other activities. If you like peace and quiet, don’t acquire very vocal African geese. Weeder geese for use on a greens growing operation is another bad fit. Breeds. Chicks and Game Birds from Stromberg's. Geese Breeds - Micro Farm Life. We sat down at the park, and the geese, used to being fed by visitors, milled around our feet. Gray Production Toulouse Geese for Sale. Celebrating the Goose: Raising Geese. A partridge, turtle doves, French hens, swans, geese: Have you ever wondered why the anonymous person who composed The Twelve Days of Christmas left out the turkey, that feathered behemoth so many people gobble up during the holidays?

Well for one, this carol—though first printed in 1780—is thought to date back to the Middle Ages; a native of America, the turkey didn’t debut in Europe until around 1519. In those long ago days, goose, swan and wild game shone as the main attractions during the bountiful celebrations of the wealthy. Live poultry made popular Christmas gifts, and the most valuable of fowl was probably the goose—a hardy bird that could live primarily off grass, be driven to market in flocks, and provide a rich food source for an often-hungry populace. Hopefully most hobby farmers don’t teeter on the brink of starvation the way medieval peasants did, but that doesn’t mean our farms can’t benefit from the addition of some geese. Your best bet? Pilgrim Geese - The Livestock Conservancy.