Cattle Breeds for the Small Farm - Animals. One of the most exciting things about living on your own farm is being able to have your own livestock. 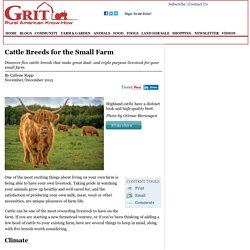 Taking pride in watching your animals grow up healthy and well cared for, and the satisfaction of producing your own milk, meat, wool or other necessities, are unique pleasures of farm life. Cattle can be one of the most rewarding livestock to have on the farm. If you are starting a new farmstead venture, or if you’ve been thinking of adding a few head of cattle to your existing farm, here are several things to keep in mind, along with five breeds worth considering.

Climate Cattle can be relatively easy to keep. Many breeds of cattle started out as “landraces,” or groups of animals that developed certain traits based on the geography and environment in which they lived and to which they adapted. Breeding One major factor to consider is if you plan to raise calves each year. 10 Farm Animal Hybrids You Didn't Know Existed. By Sam Brasch on January 16, 2014 Forget ligers, tigrons and grolar bears (oh my). 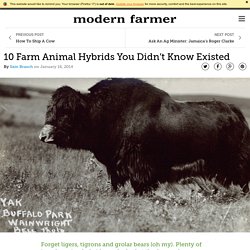 Plenty of jaw-dropping hybrids can be had at the farm, where cross-species hybrids are more common than you might think. 1. Yak butter. Yak butter for sale in Lhasa street market Yak butter is butter made from the milk of the domesticated yak (Bos grunniens). 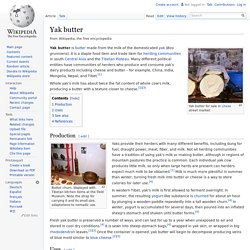 It is a staple food item and trade item for herding communities in south Central Asia and the Tibetan Plateau. Many different political entities have communities of herders who produce and consume yak's dairy products including cheese and butter – for example, China, India, Mongolia, Nepal, and Tibet.[1] Whole yak's milk has about twice the fat content of whole cow's milk, producing a butter with a texture closer to cheese.[2][3] Production[edit] Butter churn, displayed with Tibetan kitchen items at the Field Museum. Topic: dairy yaks in america? When I was younger (and before I discovered my love of farming and animals) I lived in Tibet for a year as an English teacher. 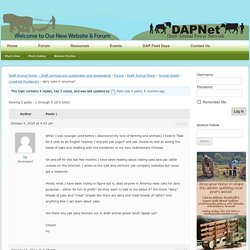 I enjoyed yak yogurt and yak cheese as well as seeing the herds of yaks and chatting with the herdsmen in my very rudimentary Chinese. On and off for the last few months I have been reading about raising yaks and yak cattle crosses on the internet. I wrote to the iyak and vermont yak company websites but never got a response. Mostly what I have been trying to figure out is, does anyone in America raise yaks for dairy purposes – either for fun or profit? How to Milk a Cow Once a Day - The Farm Barbie Blog. Owning a milk cow can be one of the most rewarding and gratifying parts of homesteading. It is also one of the bigger undertakings on the farm. Getting a milk cow should not be taken lightly. It is a commitment. 6 Things About Bottle Feeding Calves. We are bottle feeding a calf for the first time. 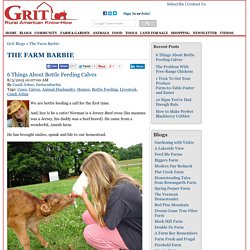 And, boy is he a cutie! Norman is a Jersey-Beef cross (his mamma was a Jersey, his daddy was a beef breed). He came from a wonderful, Amish farm. He has brought smiles, spunk and life to our homestead. Norman is a healthy, feisty bull-calf. Dexter Cattle: Breed Description. American Dexter Cattle Association Description of Breed Dexters are small cattle (as distinct from miniature cattle) that are thought to have originated in Ireland. established breed. 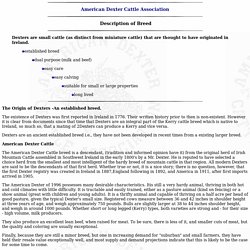 Carthage woman wrote the book on keeping a family cow. May 19 Joann Grohman's homesteading classic, first published in 1975, has been revised and updated for a new generation. 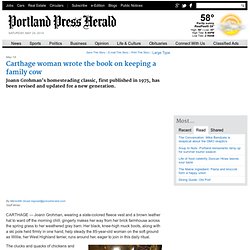 By Meredith Goad mgoad@pressherald.comStaff Writer CARTHAGE — Joann Grohman, wearing a slate-colored fleece vest and a brown leather hat to ward off the morning chill, gingerly makes her way from her brick farmhouse across the spring grass to her weathered gray barn. Her black, knee-high muck boots, along with a ski pole held firmly in one hand, help steady the 85-year-old woman on the soft ground as Willie, her West Highland terrier, runs around her, eager to join in this daily ritual. click image to enlarge Joann Grohman of Carthage strokes her cow Fern during milking. 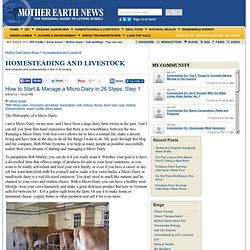 And I can tell you from first-hand experience that there is no resemblance between the two. Running a Micro Dairy with four cows allows me to have a normal life, make a decent living and have time in the day to do all the things I want to do. My goal, through this blog and my company, Bob-White Systems, is to help as many people as possible successfully realize their own dreams of starting and managing a Micro Dairy. How To Prepare Your Micro Dairy for Winter. People without a dairy background simply cannot imagine how many things need to be done every day on a dairy farm. 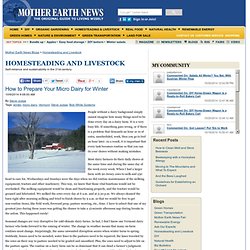 It is a very busy life. If something goes wrong, or if there is a problem that demands an hour or so of extra, unscheduled, work, then you go to bed an hour later. As a result, it is important that every task becomes routine so that you can do your chores without making mistakes. Most dairy farmers do their daily chores at the same time and during the same day of the week every week. When I had a larger farm with 90 Jersey cows to milk and 250 head to care for, Wednesdays and Sundays were the days when we did routine maintenance of the milking equipment, tractors and other machinery. Micro-Dairies: An Introduction. The Micro-Dairy Dollar Advantage Let’s do the numbers: if a conventional dairy farmer receives $17 per hundred weight for his milk, he is being paid $1.67 per gallon. 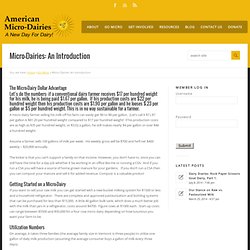 The Small-Scale Dairy by Gianaclis Caldwell. "Raw milk is today's fastest growing agricultural market, a niche product poised to become mainstream. In The Small-Scale Dairy, Gianaclis Caldwell provides those wishing to meet the demand for unprocessed milk everything they need to produce safe, healthy, raw dairy products. From cow and goat care to milk sanitation and testing, Caldwell answers all your questions and provides reliable advice based on years of experience. For both producers and consumers, The Small-Scale Dairy is a must read and a valuable contribution to a growing movement. "—Sally Fallon Morell, president, The Weston A. Price Foundation; founder, A Campaign for Real Milk The Small-Scale Dairy includes everything you need to know in order to successfully produce nourishing, healthy, farm-fresh milk. Classes Offered - Farm and Industry Short Course. Finding home among a herd of water buffalo - The Wisconsin Jewish Chronicle.

Guernsey Cattle — Breeds of Livestock, Department of Animal Science. The Isle of Guernsey, a tiny island in the English Channel off the coast of France, is the birthplace of the Guernsey cow. About 960 A.D., besieged by buccaneers and sea rovers, the Island came to the attention of Robert Duke of Normandy. He sent a group of militant monks to educate the natives to cultivate the soil and defend the land. Guernsey The Livestock Conservancy. Guernsey Advantages of the Guernsey. A product of her Island home, the island of Guernsey situated in the English Channel off the coast of France. The Guernsey has been developed over many centuries to become one of the world's leading specialist dairy breeds. Her qualities as the producer of an unique golden coloured milk high in Protein and Butterfat and rich in flavour made her the envy of the emerging dairy industry of the nineteenth and early twentieth centuries.

Today, dairy farmers in Europe and the Americas, in Africa and Asia, in Australia and New Zealand all know the advantages of the Guernsey as a competitive dairy cow, able to effectively and efficiently maintain a profit wherever she is found. Look at the Advantages of the Guernsey 1. 2. 3. 4. 5. Guernsey The Cattle Site - Breeds - Guernsey. History. 3 Ways to Artificially Inseminate Cows and Heifers. Edit Article. Encyclopedia of Dairy Sciences 2nd Edition, Four-Volume set. Pineywoods Cattle SVF Foundation, Heritage Breeds, Endangered Livestock and Rare Breed Conservation. Pineywoods cattle are an endangered landrace breed native to the Gulf Coast and Southeastern regions of the United States. They have adapted to thrive in this hot, humid climate and survive by foraging their beautiful forest terrain. Candi01a.jpg (JPEG Image, 736 × 622 pixels) DollySept2013-02a.jpg (JPEG Image, 824 × 622 pixels) Gyr and Brahman Cows and Heifers at K and K Ranch in Brownsboro, Texas.

Gyr & Brahman Cows & Heifers Last Updated: 09/22/2013 13:43:29 Web Mastering & Design by Dayle Haworth Copyright© 2001-2020 ~ K & K Ranch ~ All Rights Reserved. American Kerry Cattle Society Home. Dexter SVF Foundation, Heritage Breeds, Endangered Livestock and Rare Breed Conservation. Although the exact origin of the Dexter is unknown, most believe they are descended from Kerry cattle, a relatively small-framed dairy breed. The Dexter originated in southern Ireland in harsh conditions that fostered the development of a short, extremely hardy, dual-purpose breed. The first recorded importation of Dexters into America was in 1905, when a herd was shipped from England and ended up with several breeders across the US. SVF Foundation, Heritage Breeds, Endangered Livestock and Rare Breed Conservation. Ancestors of the Canadienne cattle first arrived in Quebec between 1608 and 1610, traveling from the Normandy and Brittany regions of France.

These cows were selected for hardiness and their ability to produce in the harsh environment of the New World. The Canadienne were the only dairy breed to be developed in North America. Kerry Cattle. Kerry cattle are most probably the descendants of the Celtic Shorthorn, brought to Ireland as long ago as 2000 B.C. They are still found grazing in the marginal pastures of the hill districts of southwestern Ireland. Kerries were imported to the United States beginning in 1818 and the breed prospered through the early 20th century. But by the 1930's, however, it had practically disappeared from North America. Today there are few Kerrys in the United States and only a few herds, based on recent imports, in Canada. The Kerry is a small-sized, fine-boned dairy breed, mostly black in color.

American Livestock Breeds Notebook. Kerry Conservancy. 9 Ways to Keep the Smell Out of Your Barn. Where there are animals, there is manure and its smell, which can be a cause of neighborhood discord. 9 Items You Need to Start a Goat Dairy. Water buffalo. Water Buffalo Fact. American Water Buffalo Association. Awbanewslettermarch2013. Yaks and Water Buffalo. How to Store Hay to Make It Last. Getting Started in Small-Scale Dairy Farming.