Bruce Li was once asked, "What is necessary to attain the highest level of Martial Art?"

"One must surrender the instinct to protect oneself," he replied.

As biological beings co-participating in the unavoidable Out-Breath of the Universe, our Natural Prime Imperative is Reproduction. In order to facilitate the Replication of Form we fall under the grip of Three Natural Drives:

1) Self-Protection: a sharp sound and the baby flinches and pulls away; The Reptilian Response of the R-complex, our basal ganglia and thalamus.

2) Hormonal Flood: during puberty as the sex drive engages. If the mind has not fastened onto any of The Great Questions prior to this 2nd drive, all intelligence is lost and we should never expect more of such a person than we would of any other 14yr old.

When we have an expectation of how another should respond and they do not meet our expecation we get upset. The problem is that at that point we are in the weak position - upset at REALITY.

I know, right?!?! Not exactly a position of power.

Expect no more of most than you would any other 14yr old and watch how much more peaceful your life is.

They did a forty year study or somesuch and determined that only 4% of the U.S. and 2% of the global populace had matured to the level of the Centaur; which arises out of the ashes of an Existential Crisis, the 'chutes and ladders' of higher thought where vision-logic washes away the contradictions from the earlier realms of concrete and form-op logic - the 14 year olds world.

98% of humanity is going to upset your expectations.

How about surrendering the instinct to protect yourself from all those 14 year olds?

3) Power: A belief we beneficially influence the future when truly we are preventing a chance for others to experience positive change.
The self-tests are simple: if it benefits you, or you have convinced yourself it is best for the whole, it is most likely at the expense or suffering of another; if you are trying to fundamentally change another without first fundamentally changing yourself, it is most likely at the expense of another.

Lang Son Traders - Home. Thank You, Joe! Do not Destroy what You Cannot Repair. Surrender The Instinct to Protect Yourself. Zen & Traditional Martial Arts. The Yin & Yang of Relaxation. I have come to believe that those who study martial arts should never look on the Yin Yang figure as a mere symbol. 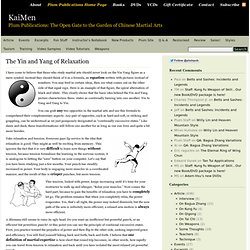 Instead they should think of it as a formula, an equation written with pictures instead of numbers. You may feed in certain ideas, then see what comes out on the other side of that equal sign. Here is an example of that figure, the spiral alternation of black and white. This clearly shows that the basic idea behind the Yin and Yang picture characterizes these states as continually turning into one another: Yin to Yang and Yang to Yin.

You can grab any two opposites in the martial arts and use this formula to comprehend their complementary aspects. Take relaxation and tension. This tension, linked with power, keeps increasing until it’s time for your instructor to walk up and whisper, “Relax your muscles.” A dilemma still seems to raise its ugly head. Often the heavy punch that is also relaxed will probably be the most powerful punch that you throw, but not necessarily. Vital Pressure Points Dim-Mak. THE SWORD.