12 Rules for Professional JavaScript in 2015. How to debug node.js applications. Api-benchmark. A node.js tool that measures and compares performances of single and multiple apis inspired by BenchmarkJs. 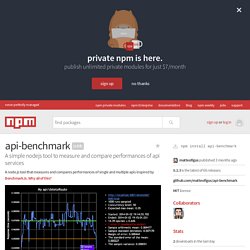 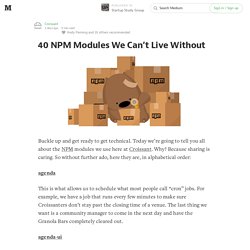 Today we’re going to tell you all about the NPM modules we use here at Croissant. Why? NodeJS Fan. Node JS Tutorial: From Zero to Hero with Nodejs / Node Js Tutorials for BeginnersI'm a NodeJS FAN Nodejs by building 10 projects: Node.js in Action 2015 Create & Deploy High Performance NodeJS Apps on the Cloud and Explore MEAN Stack 2015. 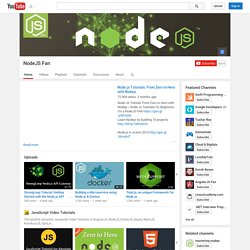 Semver explained - why there's a caret (^) in my package.json? So you're installing new modules with the --save option and get your package.json updated as a side effect. 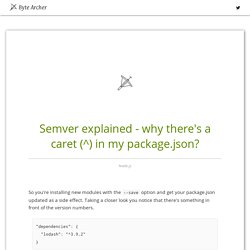 Taking a closer look you notice that there's something in front of the version numbers. You're guessing this is some sort of way to widen the range of accepted versions. 5 Easy Performance Tweaks for Node.js Express. Node.js has revolutionized web development and the Express framework must share much of the credit. 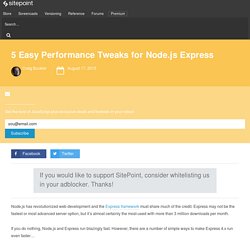 Express may not be the fastest or most advanced server option, but it’s almost certainly the most-used with more than 3 million downloads per month. NodeJS Cheat Sheet. Express.js – Logging Access and Errors. Scaling Node.js Applications. Scaling Node.js applications can be a challenge. 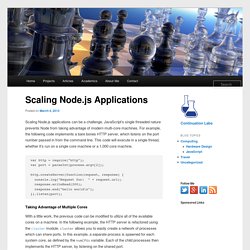 JavaScript’s single threaded nature prevents Node from taking advantage of modern multi-core machines. For example, the following code implements a bare bones HTTP server, which listens on the port number passed in from the command line. This code will execute in a single thread, whether it’s run on a single core machine or a 1,000 core machine. Taking Advantage of Multiple Cores With a little work, the previous code can be modified to utilize all of the available cores on a machine. Scaling Across Machines. Node Cluster and Express. Posted by Rowan Manning () Tagged with Express, JS, Node, Cluster Over the last couple of evenings, I’ve been playing with the Node.js Cluster module and using it to dramatically improve the amount of load Express apps can handle. 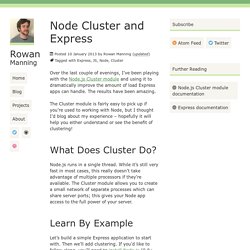 The results have been amazing. The Cluster module is fairly easy to pick up if you’re used to working with Node, but I thought I’d blog about my experience – hopefully it will help you either understand or see the benefit of clustering! What Does Cluster Do? Mastering MEAN: Introducing the MEAN stack. Develop and deploy your nextapp on the IBM Bluemixcloud platform. 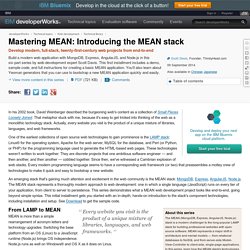 Start your free trial In his 2002 book, David Weinberger described the burgeoning web's content as a collection of Small Pieces Loosely Joined. That metaphor stuck with me, because it's easy to get tricked into thinking of the web as a monolithic technology stack. Actually, every website you visit is the product of a unique mixture of libraries, languages, and web frameworks. One of the earliest collections of open source web technologies to gain prominence is the LAMP stack: Linux® for the operating system, Apache for the web server, MySQL for the database, and Perl (or Python, or PHP) for the programming language used to generate the HTML-based web pages.

An emerging stack that's gaining much attention and excitement in the web community is the MEAN stack: MongoDB, Express, AngularJS, Node.js. “Every website you visit is the product of a unique mixture of libraries, languages, and web frameworks.” From LAMP to MEAN. MEAN Stack: Using with Node.

Express. About this Documentation Node.js v0.12.0 Manual & Documentation. The goal of this documentation is to comprehensively explain the Node.js API, both from a reference as well as a conceptual point of view. 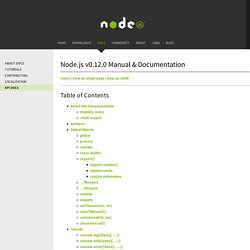 Each section describes a built-in module or high-level concept. Where appropriate, property types, method arguments, and the arguments provided to event handlers are detailed in a list underneath the topic heading. Every .html document has a corresponding .json document presenting the same information in a structured manner. This feature is experimental, and added for the benefit of IDEs and other utilities that wish to do programmatic things with the documentation. Node.js v0.12.0 Manual & Documentation. Using Node.js To Create Real-Time Web Applications. In case you haven't heard, Node.js is the hottest new technology that is revolutionizing the web. 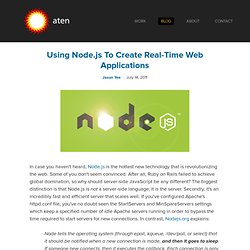 Some of you don't seem convinced. After all, Ruby on Rails failed to achieve global domination, so why should server-side JavaScript be any different? The biggest distinction is that Node.js is not a server-side language; it is the server. Secondly, it's an incredibly fast and efficient server that scales well. If you've configured Apache's httpd.conf file, you've no doubt seen the StartServers and MinSpareServers settings which keep a specified number of idle Apache servers running in order to bypass the time required to start servers for new connections. Node tells the operating system (through epoll, kqueue, /dev/poll, or select) that it should be notified when a new connection is made, and then it goes to sleep.

Creating RESTful APIs With NodeJS and MongoDB Tutorial (Part II) - Adrian Mejia’s Blog. Welcome to this RESTful API using Node.js (Express.js) and MongoDB (mongoose) tutorial. You can follow alone to make a stand alone API endpoint, or you could also check out our AngularJS or BackboneJS tutorials to build a javascript-client that connects with the endpoint we are going to built.

What RESTful API really means? REST stands for Representational State Transfer. It is an architecture that allows client-server communication through a uniform interface. They are also stateless, cachable and has property called idempotence, which means that the side effect of multiple identical requests have the same effect as the same single request. HTTP RESTful API’s are compose of: