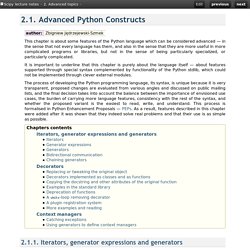 It is important to underline that this chapter is purely about the language itself — about features supported through special syntax complemented by functionality of the Python stdlib, which could not be implemented through clever external modules. How do I check if an object is an instance of a given class or of a subclass of it? Use the built-in function isinstance. if isinstance(obj, MyClass): print "obj is my object" 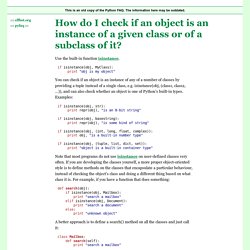 'all', 'any' are Python built-ins - Udacity. You can (and should) read about all and any in the Python docs. 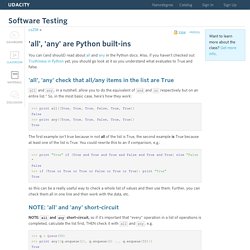 Also, if you haven't checked out Truthiness in Python yet, you should go look at it so you understand what evaluates to True and False. 'all', 'any' check that all/any items in the list are True all and any, in a nutshell, allow you to do the equivalent of and and or respectively but on an entire list.* So, in the most basic case, here's how they work: Program Arcade Games With Python And Pygame. 17.1 Introduction Games like minesweeper, tic-tac-toe, and many types of adventure games keep data for the game in a grid of numbers. 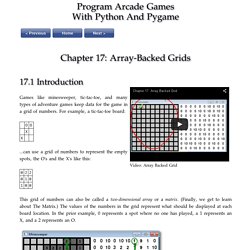 For example, a tic-tac-toe board: ...can use a grid of numbers to represent the empty spots, the O's and the X's like this: How to test a regex password in Python? Alphabet range python. Python Regular Expressions. A regular expression is a special sequence of characters that helps you match or find other strings or sets of strings, using a specialized syntax held in a pattern. 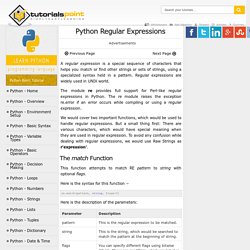 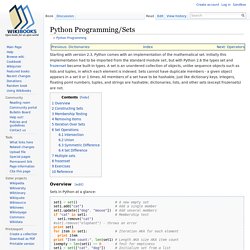 Initially this implementation had to be imported from the standard module set, but with Python 2.6 the types set and frozenset became built-in types. A set is an unordered collection of objects, unlike sequence objects such as lists and tuples, in which each element is indexed. Sets cannot have duplicate members - a given object appears in a set 0 or 1 times. All members of a set have to be hashable, just like dictionary keys. Integers, floating point numbers, tuples, and strings are hashable; dictionaries, lists, and other sets (except frozensets) are not.

§Overview[edit] Python Programming/Sets. Python Fundamentals Tutorial : Advanced Types Containers. One of the great advantages of Python as a programming language is the ease with which it allows you to manipulate containers. 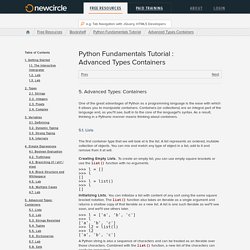 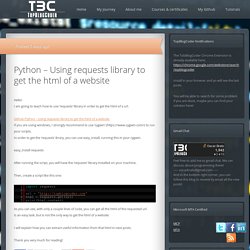 Then, create a script like this one: As you can see, with only a couple lines of code, you can get all the html of the requested url. I will explain how you can extract useful information from that html in next posts. Thank you very much for reading! Hi, I’ve solved a new problem using Python! GithubCheckio problem statement Here only need to count the number of inversions between pairs in the given sequence. Here my code: Thank you very much GithubCheckio problem statement. CheckiO House password - diningchicken's blog. 9. Tuples — How to Think Like a Computer Scientist: Learning with Python 3. 9.1. 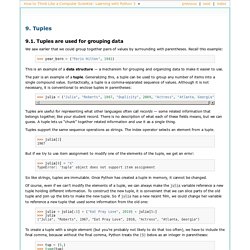 Tuples are used for grouping data We saw earlier that we could group together pairs of values by surrounding with parentheses. Recall this example: >>> year_born = ("Paris Hilton", 1981) This is an example of a data structure — a mechanism for grouping and organizing data to make it easier to use. PyQtGraph - Scientific Graphics and GUI Library for Python. Python Extension Packages for Windows - Christoph Gohlke. By Christoph Gohlke, Laboratory for Fluorescence Dynamics, University of California, Irvine. 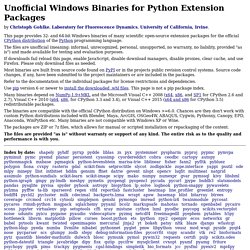 This page provides 32- and 64-bit Windows binaries of many scientific open-source extension packages for the official CPython distribution of the Python programming language. The files are unofficial (meaning: informal, unrecognized, personal, unsupported, no warranty, no liability, provided "as is") and made available for testing and evaluation purposes. If downloads fail reload this page, enable JavaScript, disable download managers, disable proxies, clear cache, and use Firefox.

Please only download files as needed. Most binaries are built from source code found on PyPI or in the projects public revision control systems. Refer to the documentation of the individual packages for license restrictions and dependencies. Use pip version 6 or newer to install the downloaded .whl files. The binaries are compatible with the official CPython distribution on Windows >=6.0. Build Environment. Regular Expressions in Python. How to use findall, finditer, split, sub, and subn in Regular Expressions in Python for Regex Code Example.

7.2. re — Regular expression operations. This module provides regular expression matching operations similar to those found in Perl. Both patterns and strings to be searched can be Unicode strings as well as 8-bit strings. Regular expressions use the backslash character ('\') to indicate special forms or to allow special characters to be used without invoking their special meaning. This collides with Python’s usage of the same character for the same purpose in string literals; for example, to match a literal backslash, one might have to write '\\\\' as the pattern string, because the regular expression must be \\, and each backslash must be expressed as \\ inside a regular Python string literal.

The solution is to use Python’s raw string notation for regular expression patterns; backslashes are not handled in any special way in a string literal prefixed with 'r'. So r"\n" is a two-character string containing '\' and 'n', while "\n" is a one-character string containing a newline. Regular Expression HOWTO. Introduction The re module was added in Python 1.5, and provides Perl-style regular expression patterns. Earlier versions of Python came with the regex module, which provided Emacs-style patterns. The regex module was removed completely in Python 2.5. Kodos - The Python Regex Debugger. 7 Python Regular Expressions Examples – Re Match Search FindAll. Regular expressions as a concept is not exclusive to Python at all. Python, however, does have some nuances when it come to working with regular expressions.

This article is part of a series of articles on Python Regular Expressions. In the first article of this series, we will focus on discussing how we work with regular expressions in python, highlighting python specifics. We are going to introduce the methods we can use to perform queries over strings in Python. We’ll then talk about how we can use grouping to work with sub-parts of the matches we found using our queries. Solutions for the Python Challenge—Possible solutions for all challenges. Tkil - "python" challenge.