Leading mPOS Platform Will Roll out Contactless Generation of Its Payment Platform With €10 Million Funding From Groupon Inc., Amex and Others. Square Said to File Confidentially for Initial Offering. Square Inc., the mobile-payments company founded and led by Jack Dorsey, the interim chief executive officer of Twitter Inc., filed confidentially for an initial public offering, people with knowledge of the matter said. 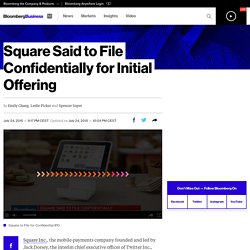 Square has been working with Goldman Sachs Group Inc., Morgan Stanley and JPMorgan Chase & Co. on the IPO, said the people, who asked not to be identified because the process is private. Square, which processed $30 billion in payments from its millions of merchant customers in 2014, has been expanding into other areas such as business lending and payroll processing to provide more services. Aaron Zamost, a spokesman for San Francisco-based Square, declined to comment, as did representatives for the banks. Under the Jumpstart Our Business Startups Act, companies with less than $1 billion in revenue can file for an IPO with the U.S. Payleven arrives in Ireland. London-based mobile point-of-sale provider payleven Tuesday announced that it is now available in Ireland, its 11th market. 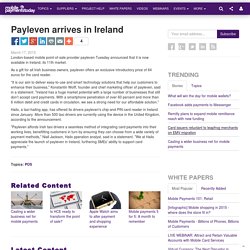 As a gift for all Irish business owners, payleven offers an exclusive introductory price of 64 euros for the card reader. “It is our aim to deliver easy-to-use and smart technology solutions that help our customers to enhance their business," Konstantin Wolff, founder and chief marketing officer of payleven, said in a statement.

"Ireland has a huge market potential with a large number of businesses that still don’t accept card payments. With a smartphone penetration of over 60 percent and more than 6 million debit and credit cards in circulation, we see a strong need for our affordable solution. " Payleven vs. iZettle vs. SumUp: which is better? Vend Partners with iZettle to make Payments Easier for European Retailers. Faster and easier to navigate with a crisp new look and exciting new features. 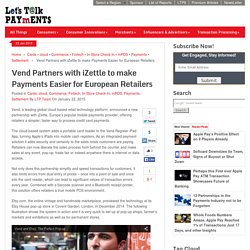 As an integrated payment solution it adds security and certainty to the sales totals customers are paying. Square reaches $100 million single-day sales milestone. How Europe’s Most Used Mobile Payments Solution Will Take on the U.S. Ever since its product SEQR was first launched in Sweden two years ago, global mobile payments provider Seamless, founded in 2001, has expanded into several other countries in Europe. 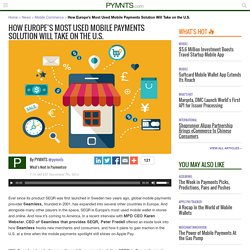 And alongside many other players in the space, SEQR is Europe’s most used mobile wallet in stores and online. And now it’s coming to America. In a recent interview with MPD CEO Karen Webster, CEO of Seamless that provides SEQR, Peter Fredell offered an inside look into how Seamless hooks new merchants and consumers, and how it plans to gain traction in the U.S. at a time when the mobile payments spotlight still shines on Apple Pay. KW: Seamless’ website says its mobile payment solution SEQR is Europe’s most used mobile wallet online and in stores.

Why POS Players Should Be Nervous. The launch of Apple Pay has kept everyone in payments pretty busy speculating about its impact to others with digital wallet/account ambitions. 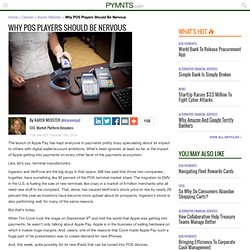 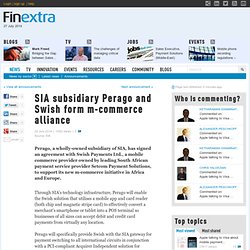 Through SIA's technology infrastructure, Perago will enable the Swish solution that utilises a mobile app and card reader (both chip and magnetic stripe card) to effectively convert a merchant's smartphone or tablet into a POS terminal so businesses of all sizes can accept debit and credit card payments from virtually any location. Taking The Pain Out of Merchant Onboarding. Ever since Square introduced its first mPOS device in 2009, merchant onboarding has become a strategic agenda item for the merchant acquiring space. 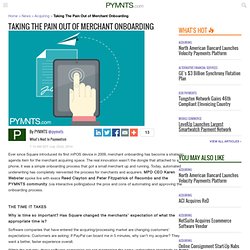 The real innovation wasn’t the dongle that attached to a phone, it was a simple onboarding process that got a small merchant up and running. Today, automated underwriting has completely reinvented the process for merchants and acquirers. MPD CEO Karen Webster spoke live with execs Reed Clayton and Peter Fitzpatrick of Recombo and the PYMNTS community (via interactive polling)about the pros and cons of automating and approving the onboarding process. Why is time so important? Has Square changed the merchants’ expectation of what the appropriate time is? Software companies that have entered the acquiring/processing market are changing customers’ expectations. Within the industry, these software companies are not maintaining the same underwriting standards as traditional acquirers.

5 Lies You Might Hear About Mobile POS. Only 2% of UK micro-businesses use an mPOS solution - report. According to a recent report titled ‘mPOS attitudes and adoption’, carried out by research firm MobileSquared on behalf of payment service provider Kalixa Group, the number one barrier to business growth is cash flow. mPOS solutions enable businesses to accept a card payment using a smartphone instead of a traditional fixed point-of-sale terminal. 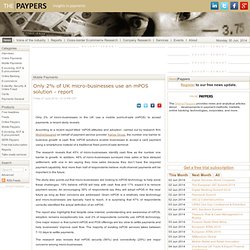 How to Spot the mPOS Winners. The mPOS market is experiencing rapid global growth, with analysts suggesting 12 percent growth per year for the next 3-4 years. 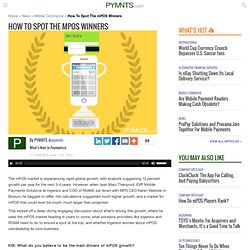 However, when Jean Marc Thienpont, EVP Mobile Payments Solutions at Ingenico and COO of ROAM, sat down with MPD CEO Karen Webster in Boston, he begged to differ. His calculations suggested much higher growth, and a market for mPOS that could even be much, much larger than projected. That kicked off a deep-diving engaging discussion about what’s driving this growth, where he sees the mPOS market heading in years to come, what solutions providers like Ingenico and ROAM need to do to ensure a spot at the top, and whether Ingenico worries about mPOS cannibalizing its core business. KW: What do you believe to be the main drivers of mPOS growth? JMT: The first driver is the convenience and customer experience that it’s bringing.

The second is that it increases the payment acceptance addressable market. The third is that it opens up brand new use cases worldwide. Mr. In Pictures: Square s Efforts to Smooth Its Rough Edges. Square Debuts Cash Advance Service for SMBs. Mobile payments company Square continued its flurry of new service announcements following the shuttering of the Square Wallet earlier this month. 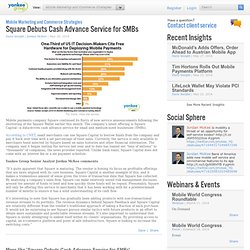 MPOS set to make up almost half of all point-of-sale installations within five years. The installed base of mPOS devices is set to make up to 46% of all point-of-sale terminals in circulation by 2019, according to forecasts by ABI Research. The fivefold increase in penetration is not just being driven by micro-merchant adoption, says ABI, as mPOS vendors are increasingly focused on sales higher up the value chain to mid-market and larger department stores. Senior ABI analyst Phil Sealy comments: "There has been much said about the cannibalisation of the traditional POS market, but ABI Research believes that both traditional POS and mPOS can grow together in tandem, co-existing, expanding the presence of digital payment acceptance.