Watch Live TV On A Roku with Channel PEAR - The Streaming Advisor. There is a new private channel for Roku that has potential to be one of the most popular Roku Channels public or Private. 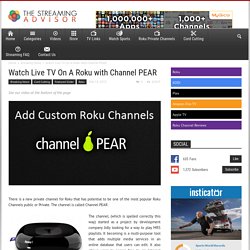 The channel is called Channel PEAR. The channel, (which is spelled correctly this way) started as a project by development company Jidly looking for a way to play MRS playlists. It becoming is a multi-purpose tool that adds multiple media services in an online database that users can edit. It also allows users to access free to air Internet based media and link personal files to a cloud-based system where their files will be accessible without the need of a local server (computer) in order to access it. The idea reminds me of Plex or XBMC. 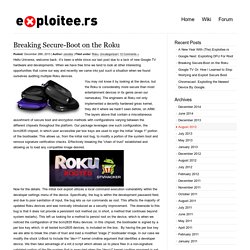 It’s been a while since our last post due to a lack of new Google TV hardware and developments. When we have free time we tend to look at other interesting opportunities that come our way and recently we came into just such a situation when we found ourselves auditing multiple Roku devices. You may not know it by looking at the device, but the Roku is considerably more secure than most entertainment devices in its genre (even our namesake). The engineers at Roku not only implemented a decently hardened grsec kernel, they did it where we hadn’t seen before, on ARM. Now for the details. We’ve packaged up all of the above into a nicely commented script which can be downloaded from our download servers at: The file above contains a script with a cpio archive that includes the following 5 files: This bug will probably get patched soon. What Can You Do With a Roku? Several people have asked me recently about streaming media set top boxes. 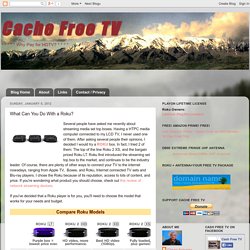 Having a HTPC media computer connected to my LCD TV, I never used one of them. After asking several people their opinions, I decided I would try a ROKU box. In fact, I tried 2 of them: The top of the line Roku 2 XS, and the bargain priced Roku LT. Roku first introduced the streaming set top box to the market, and continues to be the industry leader. Of course, there are plenty of other ways to connect your TV to the internet nowadays, ranging from Apple TV, Boxee, and Roku, Internet connected TV sets and Blu-ray players. If you've decided that a Roku player is for you, you'll need to choose the model that works for your needs and budget. Compare Roku Models * Availability of 720p or 1080p HD video varies by entertainment channel. Please note that Roku is no longer available with output for component (RGB) cables, or S/PDIF digital sound output. 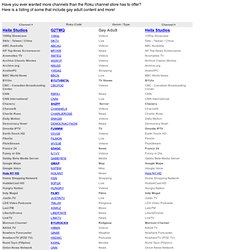 The bad: The Roku HD currently lacks Vudu and YouTube channels, which are found on most competing products. The bottom line: With its ability to stream hundreds of audio and video channels (including Netflix, Amazon, and Hulu Plus), the $60 Roku HD would be our top pick for those seeking an ultra-affordable Internet media box -- if not for the fact that it's nearly identical to the slightly cheaper Roku LT. " - CNet.com.