Free and Inexpensive Ways to Pick Up Open Source Tech Skills. By Sam Dean - Aug. 16, 2013Comments (0) This week Twitter was in the news for buying San Francisco-based company Marakana, which has focused on tech training, including training many people to use open source technology platforms and tools. 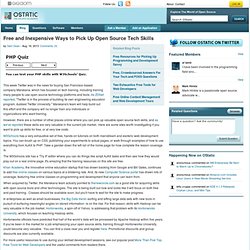 As ZDNet reported, "Twitter is in the process of building its own engineering education program, dubbed Twitter University. " Marakana's team will help build out this effort and the company will no longer train any individuals or organizations who want training. However, there are a number of other places online where you can pick up valuable open source tech skills, and as we've reported these skills are very valuable in the current job market.

10 tips for mastering Microsoft Outlook 2013. Keeping track of emails, calendars and contacts can suck untold time out of any workday. 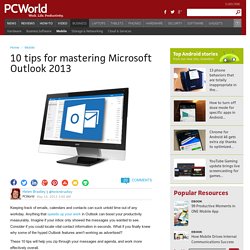 Anything that speeds up your work in Outlook can boost your productivity measurably. Imagine if your inbox only showed the messages you wanted to see. Consider if you could locate vital contact information in seconds. What if you finally knew why some of the hyped Outlook features aren't working as advertised? These 10 tips will help you zip through your messages and agenda, and work more effectively overall. 1. When you first open your inbox, a default view appears, but it doesn't have to look this way. Also on the View tab, you can select Message Previews and choose Off to turn the preview off. Click View Settings for options for customizing a view, such as adding columns or rearranging their order.

Once you have arranged the inbox to your liking, click Change View > Save Current View As a New View. 2. Outlook colors unread emails differently from messages you've already read. ReplaceReader.

Programming. What is graphene? Here’s what you need to know about a material that could be the next silicon. Graphene, an emerging material that could change the way electronic components are made and help computing performance continue to grow, is everywhere in the research world these days. 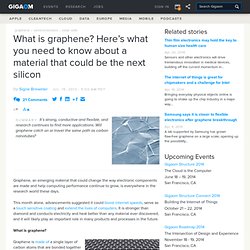 This month alone, advancements suggested it could boost internet speeds, serve as a touch sensitive coating and extend the lives of computers. It is stronger than diamond and conducts electricity and heat better than any material ever discovered, and it will likely play an important role in many products and processes in the future. What is graphene? Graphene is made of a single layer of carbon atoms that are bonded together in a repeating pattern of hexagons. Graphene is one million times thinner than paper; so thin that it is actually considered two dimensional.

Carbon is an incredibly versatile element. These single layers of carbon atoms provide the foundation for other important materials. 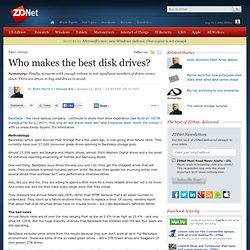 And Enterprise disks: worth the money?) With us onesy-twosy buyers. It's informative. MethodologyBackblaze, which open sourced their Storage Pod a few years ago, is now giving drive failure rates. They currently have over 27,000 consumer grade drives spinning in Backblaze storage pods. Almost 13,000 each are Seagate and Hitachi drives, almost 3000 Western Digital drives and a too small for statistical reporting smattering of Toshiba and Samsung drives. One cool thing: Backblaze buys drives the way you and I do: they get the cheapest drives that will work. Also, like you and me, they are willing to spend a little more for a more reliable drive but not a lot more.

They measure the annual failure rate (AFR) rather than MTBF because that's an easier number to understand. Of course Hitachi drives typically cost more. The PC industry is heading for collapse. Over the past few days I've talked a lot about how we're leaving behind the PC era and moving instead to a 'post-PC' era. 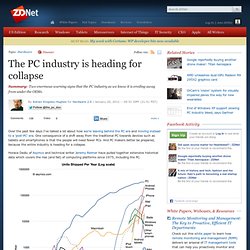 One consequence of a shift away from the traditional PC towards devices such as tablets and smartphones is that the people will need fewer PCs. And PC makers better be prepared, because the entire industry is heading for a collapse. Horace Dediu of Asymco and technical writer Jeremy Reimer have pulled together extensive historical data which covers the rise (and fall) of computing platforms since 1975, including the PC. There's are several aspects of this chart that are worth noting: The sustained pressure that the PC has been under from new platform over the past decade, after pretty much having the 1990s all to itself.The insane growth that platforms such as the iPhone, iPad and Android have experienced over the past few years.Despite what you might hear and read elsewhere, the iPad is not a niche device.