Which Cross Platform Framework Is Preferable For Enterprise 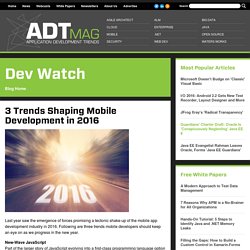 Following are three trends mobile developers should keep an eye on as we progress in the new year. New-Wave JavaScript Part of the larger story of JavaScript evolving into a first-class programming language option far beyond its Web site scripting origins, this trend was exemplified by the emergence of React Native in the mobile realm. Facebook engineers took their React framework for building Web sites and applied it to creating fully native mobile apps for iOS and Android. What sets React Native apart from a zillion other JavaScript frameworks/libraries is its unique approach to cross-platform app development, eschewing the classic "write once, run anywhere" approach in favor of a "learn once, write anywhere" paradigm. Occhino highlighted various attempts to duplicate native widgets as an example. Comparing Titanium and PhoneGap. July, 2014 : The following blog post is an updated version of a blog post written by Kevin Whinnery in May 2012. 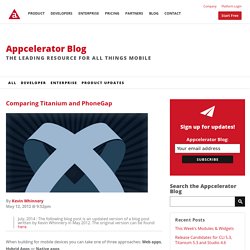 The original version can be found here. When building for mobile devices you can take one of three approaches: Web apps, Hybrid Apps or Native apps. Web Apps are websites designed to fit in mobile screens and are accessed by typing a URL in the phone’s browser. There are multiple UI frameworks that can make your Web app look like a native app, or you can build it using media queries to make it responsive to the web browser’s dimensions.

Hybrid Apps are Web apps that are packaged in a custom full-screen browser to resemble a native mobile app, with extensions that provide access to some hardware features, but your user interface is still written in HTML/CSS and rendered by a web browser. Native Apps are written using different languages depending on the platform. From 10,000 feet, PhoneGap and Titanium appear to be similar. But that’s really where the similarities end. The future of mobile app development - The Official Microsoft Blog. It is incredible how much has happened since Xamarin joined Microsoft just over a month ago, starting with Scott Guthrie’s Build 2016 announcements that Xamarin is now part of all editions of Visual Studio at no additional charge — from Community to Enterprise — and our plans to open source the Xamarin SDK. 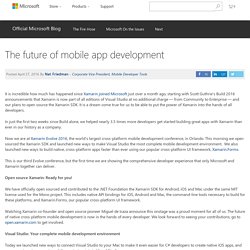 It is a dream come true for us to be able to put the power of Xamarin into the hands of all developers. In just the first two weeks since Build alone, we helped nearly 3.5 times more developers get started building great apps with Xamarin than ever in our history as a company. Now we are at Xamarin Evolve 2016, the world’s largest cross-platform mobile development conference, in Orlando. This morning we open sourced the Xamarin SDK and launched new ways to make Visual Studio the most complete mobile development environment. We also launched new ways to build native, cross-platform apps faster than ever using our popular cross-platform UI framework, Xamarin.Forms. 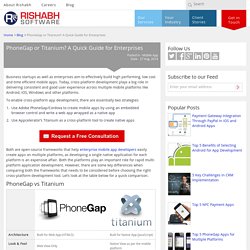 Today, cross-platform development plays a big role in delivering consistent and good user experience across multiple mobile platforms like Android, iOS, Windows and other platforms. To enable cross-platform app development, there are essentially two strategies: Use Adobe PhoneGap/Cordova to create mobile apps by using an embedded browser control and write a web app wrapped as a native appUse Appcelerator’s Titanium as a cross-platform tool to create native apps Both are open-source frameworks that help enterprise mobile app developers easily create apps on multiple platforms, as developing a single native application for each platform is an expensive affair. PhoneGap vs Titanium Conclusion. Mobile Frameworks To Develop Multi-Platform Apps - 26 Items.