10 Best iPhone 7 Apps You Must Have in 2017. Choosing a CMS – There is More Than Just Wordpress. How VR is Shaping the Present and the Future. Virtual reality has the potential to change the course of major industries around the world. 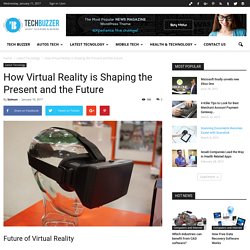 It is not only supportive in medicine, but can also be applied to train military personnel, expanding virtual prototypes of new cars, develop virtual architectural models and allow businesses in the field of HR and conduct trainings and meetings. For video game lovers, it provides an environment where they feel they are actually in the game. How Algorithms Can Impact Online Civil Rights Movements. Access to the internet enables billions of people worldwide to share their stories; whether those stories reach a widespread audience, however, depends on how platforms promote certain content over others. 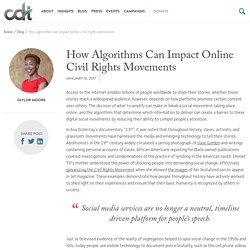 Sony wants you to stop touching (or talking to) your car's infotainment system. SoftKinetic, a Belgian company acquired by Sony last year, allowed me to demo some of the impressive sensor technology it’s adding to current-model BMW 5 and 7 series cars. 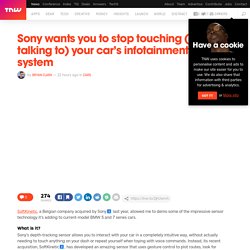 What is it? Sony’s depth-tracking sensor allows you to interact with your car in a completely intuitive way, without actually needing to touch anything on your dash or repeat yourself when toying with voice commands. Instead, its recent acquisition, SoftKinetic, has developed an amazing sensor that uses gesture control to plot routes, look for directions, and control in-dash items like climate and entertainment options. 3 Things To Do If You Lose Your Computer Data. Your computer data has your life stored in it. 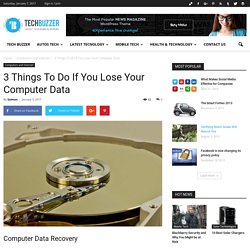 From important work documents, to passwords to certain websites, to information about your credit cards and bank accounts. You need your computer to be reliable and keep all your data, but unfortunately, computers are imperfect. Because computers are designed by flawed humans, losing computer data can be very easy. Hard drives are generally seen as somewhat unreliable, and the internal hard drive found in your computer may fail, and they could fail at any time. Will Apple Upgraded iPhone 7 or iPhone 8.

Apple seems to have big plans for 2017, as speculations about upgraded iPhone models give us strong hints of new designs and revolutionary new technology. 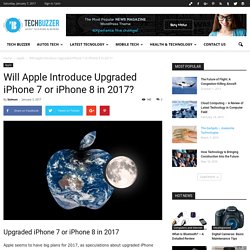 However, recent revelation of Mac Otakara forces us to think otherwise. Before we move forward what the Japanese blog says, the question arises, how credible this information is? Border guards in Spain find migrants hidden in suitcase, car. Ant Financial’s Rural Strategy Focuses On China’s Microfinance Opportunities – ChinaTechNews.com. Even with the explosive growth of technology in China, it's still important to remember that China is still a nation of peasants. 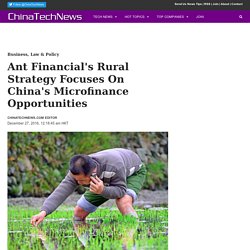 So Alibaba's Ant Financial is now focusing its sights on a new rural financial services strategy. To this end, the company announced plans to make a strategic investment in CFPA Microfinance and to establish a joint venture with China Insurance. UK Is The Top Destination For Emigrating Irish Professionals According To LinkedIn Data. New data released today by LinkedIn has shown that the UK was the top destination for emigrating Irish professionals during the year to October 2016. 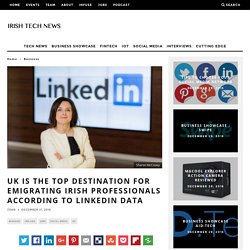 According to the data, 28% of talent that left Ireland moved to the UK, with net losses in the healthcare, architectural & engineering and professional services sectors between both countries. Overall, Ireland continues to be a net beneficiary of professional migration, with more talent moving to the country than emigrating. The software sector attracted the most professionals, with the Irish tech industry continuing to lure talent to the country thanks to the presence of a range of multinationals and a flourishing indigenous industry. India, France, Brazil and Italy respectively accounted for the largest contribution of professionals moving to take up positions in the Irish software sector. Viber adds new chat extensions and video message functions ‹ Japan Today: Japan News and Discussion. Technology ( ) Rakuten Group company Viber Media S.a.r.l has announced a major update of its Viber mobile messaging app, adding new chat extensions and video message functions. 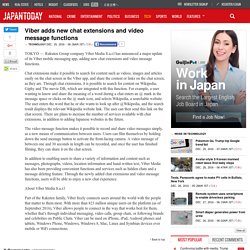 Chat extensions make it possible to search for content such as videos, images and articles easily on the chat screen in the Viber app, and share the content or links on the chat screen, as they are. Through chat extensions, it is possible to search for content on Wikipedia, Giphy and The movie DB, which are integrated with this function. For example, a user wanting to know and share the meaning of a word during a chat enters an @ mark in the message space or clicks on the @ mark icon, and selects Wikipedia, a searchable website. The user enters the word that he or she wants to look up after @Wikipedia, and the search result displays the relevant Wikipedia website link. The video message function makes it possible to record and share video messages simply, as a new means of communication between users. 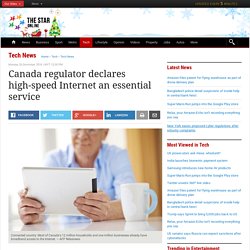 The Canadian Radio-television and Telecommunications Commission (CRTC) said a new Can$750mil (RM2.48bil) fund would be created to reach the goal of speeds of at least 50 Mbps download and 10 Mbps upload. In addition, telecoms were ordered to provide it with their investment plans within six months to help meet this objective. Android Wear 2.0 Smartwatches to Launch Next Year, Google Reveals – Techvibes. California Puts Brakes on Uber's Self-Driving Car Rollout - Personal Tech on Top Tech News. By Joseph Pisani. 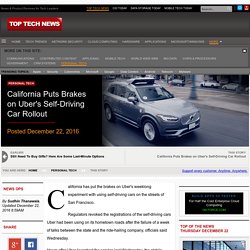 Updated December 22, 2016. Holiday shopping procrastinators can breathe easy. Yes, most online shipping deadlines have passed. But many retailers are offering other ways to get gifts at the last minute, whether it's staying open through the wee hours of the night like Toys R Us, or offering Christmas Eve store pickup like Wal-Mart. Here are some options for those still scrambling to buy presents: Midnight Runs Many stores are extending their hours in the days leading up to Christmas. Toys R Us will stay open from 6 a.m. on Dec. 23 straight to 9 p.m. on Christmas Eve, while department store Kohl's will stay open from Dec. 20 until Christmas Eve. Shop the Unexpected. What the Tech: Robotic Gifts for Kids - Story. Since kids started celebrating Christmas with toys under the tree, futuristic gadgets have been hot items. If you're old enough to remember the Mr. Robot toy from the 1950s or the wind-up Space Robot from the 1960s you'll understand why kids today are excited about the robots of 2016.

They've come a long long way from just talking. Health insurance technology startup Zipari lands $7 million in Series A funding. Health insurance tech startup Zipari, nabbed $7 million in its first round of funding led by Vertical Venture Partners. The company will use the cash to meet the expanding demand for its suite of customer relationship management-centered software as a service for the health insurance industry. "This capital expands our ability to address insurance carriers' need for analytics to understand customers, and highly customized CRM solutions," said Mark Nathan, CEO of Zipari, in a statement.

The technology continues to become increasingly intelligent about the needs of health insurance members through the full array of touches those members have with their insurance. It provides insights on real-time consumer activity, which in turn allows segmentation and predictive analytics to anticipate what members will want next, and which of them will want it. Zipari offers predictive analytics and a rules engine within its key InsureCX solution. Moisture Drying Technology of Diabetic Socks. Defying California, Uber won't stop self-driving cars. SAN FRANCISCO — Uber says it won't comply with a California Department of Motor Vehicles demand that it get a permit to test its self-driving cars in San Francisco. 42 States Extend Deadline to Sign Up For Obamacare. Donald Trump Strikes Conciliatory Tone in Meeting With Tech Executives.

Tech Tuesday warning: Santa letter sites may be scams. CES 2017 Promises to Unveil Latest Tech Advances. By James R. Lint Faculty Member, School of Business, American Military University Contributor, In Homeland Security If you are interested in the future of technology, be sure to attend the International Consumer Electronics Show in Las Vegas on January 5-8, 2017. Creating a Merchant Account for Your eBay Business. Self-Balancing Motorcycle Could Hit the Streets by 2017. Capturing the mundanity of humanity: the rapid rise of live-streaming.

Apple AirPods Are Still Delayed Because Of Technical Problems. A sneak peek at Propel’s battling Star Wars drones. PowerPoint diagrams in Business Promotion. President-elect Trump retweets teenager in rant against CNN. Fllike wants to be the Yelp of airlines. Survey Reveals People Keep the Same Profile Picture for Years. How we may see a cashless society. What will it take for the esports scene to grow up? How Free Data Recovery Software Works. 13 of the best tweets about the election. How To Stay In Contact With No Phone Access. OK, Alexa: A Google Home Versus Amazon Echo IQ Test. Boosted Board owners told to stop riding while the company investigates ‘venting’ batteries. Microsoft: Google's Policy Endangers Windows Users. Here's what happens when Obama gives up his Twitter account - CNET. Apple will no longer make external monitors. Will the Future See Art and Technology Come Closer? Zuta Labs Launches a Mini Robotic Printer.

The LG V20 is a safe, dependable upgrade, after the failure of modular G5 smartphone. Selency raises $3.3 million for its online marketplace for second-hand furniture. How modular bionic upgrades will keep your body cutting edge. Developing marketing strategy and its proper representation. 6 tips on how to keep your computer in good condition. 7 Things to Consider Before Hiring an Electrical Contractor. Big Changes for Apple’s Car Project. Top Tools for Taking Better Selfies. How Bees Make Honey? Facebook Launches Ad-Block Proof Advertising Strategy. Are Drone Cars a Reality?