Evacuation of children in WWII 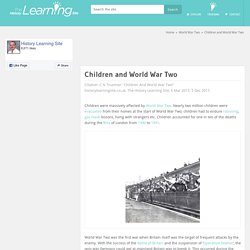 Nearly two million children were evacuated from their homes at the start of World War Two; children had to endure rationing, gas mask lessons, living with strangers etc. Children accounted for one in ten of the deaths during the Blitz of London from 1940 to 1941. World War Two was the first war when Britain itself was the target of frequent attacks by the enemy. Children of the wartime evacuation. In January 1941, Sheila Shear and her sister were evacuated from east London to the Chilterns and billeted with a bachelor called Harry Mayo. 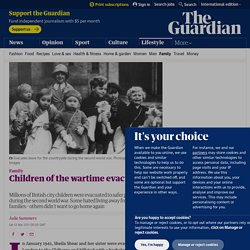 They came from very different backgrounds – the Shears were Jewish, he was Christian – but an affectionate bond developed between them. Weekly visits and holidays with Uncle Harry, as they came to know him, continued long after the war had ended. When Harry died, Sheila and her mother went to the funeral: "When we got to Chesham, we were treated like the closest members of his family. In fact, in the church – and this was the first Christian funeral my mother and I had ever been to – we were put to sit in the front row, in front of Uncle Harry's nieces and nephews. Evacuation During World War Two. What was it like to be an evacuee? 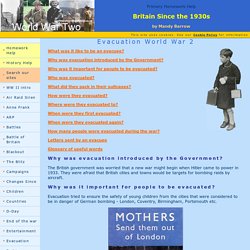