Who Are Our Leaders Activity 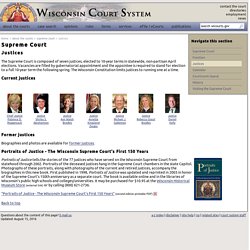 Vacancies are filled by gubernatorial appointment and the appointee is required to stand for election to a full 10-year term the following spring. The Wisconsin Constitution limits justices to running one at a time. Current justices Former justices Biographies and photos are available for former justices. Biographies of Current Justices of the Supreme Court. Stephen G. 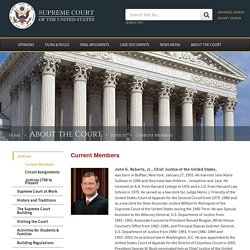 Breyer, Associate Justice, was born in San Francisco, California, August 15, 1938. He married Joanna Hare in 1967, and has three children - Chloe, Nell, and Michael. Use this to locate YOUR state representative. Wisconsin State Assembly. Wisconsin State Senate. The United States House of Representatives. U.S. Senate. Office of Governor Scott Walker. Sun Prairie, WI - Official Website. The Mayor strives to provide Sun Prairie residents and businesses with the high level of city services and the quality infrastructure they have come to expect in a fiscally responsible manner. 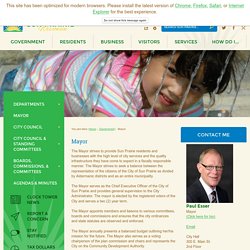 The Mayor strives to seek a balance between the representation of the citizens of the City of Sun Prairie as divided by Aldermanic districts and as an entire municipality. The Mayor serves as the Chief Executive Officer of the City of Sun Prairie and provides general supervision to the City Administrator. The mayor is elected by the registered voters of the City and serves a two (2) year term. The Mayor appoints members and liaisons to various committees, boards and commissions and ensures that the city ordinances and state statutes are observed and enforced. The Mayor annually presents a balanced budget outlining her/his mission for the future. National Executive Branch.

The tradition of the Cabinet dates back to the beginnings of the Presidency itself. 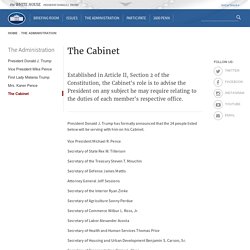 Established in Article II, Section 2, of the Constitution, the Cabinet's role is to advise the President on any subject he may require relating to the duties of each member's respective office. The Cabinet includes the Vice President and the heads of 15 executive departments — the Secretaries of Agriculture, Commerce, Defense, Education, Energy, Health and Human Services, Homeland Security, Housing and Urban Development, Interior, Labor, State, Transportation, Treasury, and Veterans Affairs, as well as the Attorney General. In order of succession to the Presidency: Vice President of the United States Joseph R.