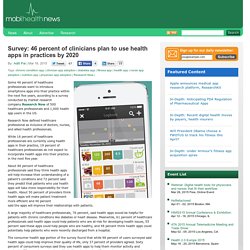 ‘The Patient Will See You Now,’ by Eric Topol. Photo With his previous book, “The Creative Destruction of Medicine,” Eric Topol, a cardiologist and director of the Scripps Translational Science Institute, established himself as one of medicine’s most innovative thinkers about the digital future. 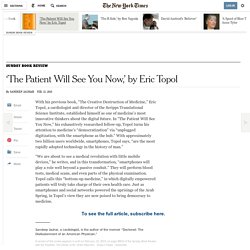 In “The Patient Will See You Now,” his exhaustively researched follow-up, Topol turns his attention to medicine’s “democratization” via “unplugged digitization, with the smartphone as the hub.” With approximately two billion users worldwide, smartphones, Topol says, “are the most rapidly adopted technology in the history of man.” “We are about to see a medical revolution with little mobile devices,” he writes, and in this transformation, “smartphones will play a role well beyond a passive conduit.” They will perform blood tests, medical scans, and even parts of the physical examination.

The insurgency couldn’t happen soon enough. Topol’s book is chock-full of such bold predictions. NIH awards $2M for development of stress eating app. Sherry Pagoto, Associate Professor of Medicine, UMMS Researchers from the University of Massachusetts Medical School and Worcester Polytechnic Institute have developed an app that helps people understand why they are overeating. 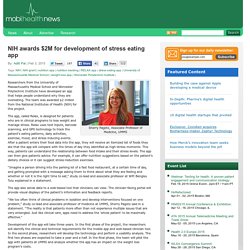 The team was awarded $2 million from the National Institutes of Health (NIH) for this project. Stanford launches patient app with Apple HealthKit integration. New Jersey hospital sets up an on-site digital health store. Toward the end of last year, Morristown Medical Center, a part of the Atlantic Health System in New Jersey, opened up HealtheConnect, an on-site, physical store located just off the hospital’s main lobby where patients, family members, and medical professionals can learn about health apps and wearable devices. 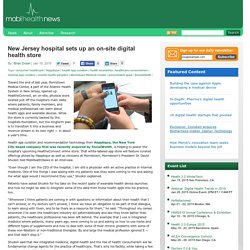 While the store is currently backed by the hospitals foundation, but the longterm plan is to transition it into a business and revenue stream in its own right — in about a year’s time. Health app curation and recommendation technology from Happtique, the New York City-based company that was recently acquired by SocialWellth, is helping to power the hospital’s upcoming HealtheConnect online store. That white-labeled app store will feature curated offerings picked by Happtique as well as clinicians at Morristown, Morristown’s President Dr. David Shulkin told MobiHealthNews in an interview. Credit: Morristown Medical Center. Health industries trends to watch: PwC. As the health sector moves beyond the Affordable Care Act and onto consumer-centered, digitally enabled care, here are the top 10 issues dominating the agenda in 2015. 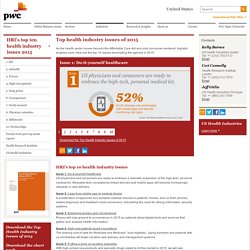 Issue 1: Do-it-yourself healthcare US physicians and consumers are ready to embrace a dramatic expansion of the high-tech, personal medical kit. Wearable tech, smartphone-linked devices and mobile apps will become increasingly valuable in care delivery. Issue 2: Leap from mobile app to medical device A proliferation of approved and portable medical devices in patients’ homes, and on their phones, makes diagnosis and treatment more convenient, redoubling the need for strong information security systems. Issue 3: Balancing privacy and convenience Privacy will lose ground to convenience in 2015 as patients adopt digital tools and services that gather and analyze health information. 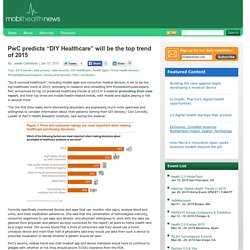 PwC announced its top 10 predicted healthcare trends of 2015 in a webinar promoting their new report, and their top three are mobile health-related trends, with mobile and digital playing a role in several more. “For the first time really we’re discovering physicians are expressing much more openness and willingness to consider information about their patients coming from DIY devices,” Ceci Connolly, Leader of PwC’s Health Research Institute, said during the webinar. Report: MyFitnessPal, Weight Watchers, Lose It! are top apps recommended by docs. Palo Alto-based HealthTap has released a ranking of health, wellness, and medical apps based on the public endorsements of thousands of doctors who use the HealthTap AppRx platform. 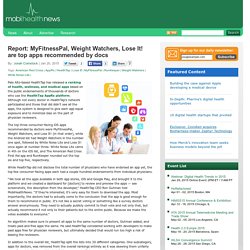 Although not every doctor in HealthTap’s network participated and those that did didn’t see all the apps, the system is designed to give each app equal exposure and to minimize bias on the part of physician reviewers. The top three consumer-facing iOS apps recommended by doctors were MyFitnessPal, Weight Watchers, and Lose It! (in that order), while the Android list had Weight Watchers in the number one spot, followed by White Noise Lite and Lose It! Once again at number three. White Noise Lite came in 4th on the iOS list, and The American Red Cross First Aid app and RunKeeper rounded out the top six and top five, respectively. An algorithm makes sure to present all apps to the same number of doctors, Gutman added, and treats paid and free apps the same.