Personhood. Personhood is the status of being a person. 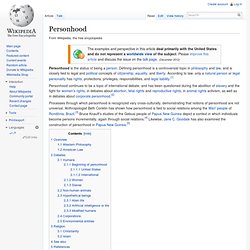 Defining personhood is a controversial topic in philosophy and law, and is closely tied to legal and political concepts of citizenship, equality, and liberty. According to law, only a natural person or legal personality has rights, protections, privileges, responsibilities, and legal liability.[1] Personhood continues to be a topic of international debate, and has been questioned during the abolition of slavery and the fight for women's rights, in debates about abortion, fetal rights and reproductive rights, in animal rights activism, as well as in debates about corporate personhood.[2] Processes through which personhood is recognized vary cross-culturally, demonstrating that notions of personhood are not universal. Overview[edit] Western Philosophy[edit] What is crucial about agents is that things matter to them. Others, such as American Philosopher Francis J. TROM : the reality of me.

Human robot The player provides you with lots of helpful features;it remembers which video you watched and where you were in the video, it streams the videos from vimeo and the buttons to the left change the narrator's voice. 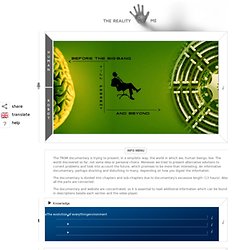 You can choose from the following two options:HUMAN - three voices with different accents.ROBOT - text readerSome may prefer the robot voice since it sounds a bit like AI, and it may give you the impression of a distant voice, analyzing the human species from distance;or some may prefer the warm, calm and sentimental voices of the human narrators with different accents which provide some diversity for such a long documentary.The language button for the website (left menu) will change the subtitle of the documentary as well if it exists, for example: if the documentary has been translated to Romanian and you choose Romanian for the website language the Romanian subtitle will be to added to the player as well. Philosophy of Mind: An Overview.

Brains & Minds Laura Weed takes us on a tour of the mind/brain controversy. 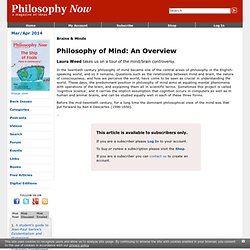 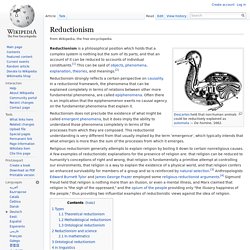 Reductionism does not preclude the existence of what might be called emergent phenomena, but it does imply the ability to understand those phenomena completely in terms of the processes from which they are composed. This reductionist understanding is very different from that usually implied by the term 'emergence', which typically intends that what emerges is more than the sum of the processes from which it emerges. Religious reductionism generally attempts to explain religion by boiling it down to certain nonreligious causes. Dualism (philosophy of mind) René Descartes's illustration of dualism. 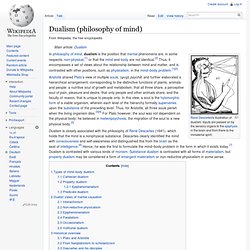 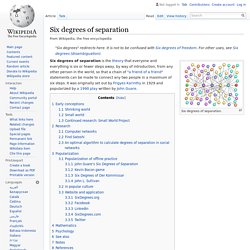 Early conceptions[edit] Shrinking world[edit] Theories on optimal design of cities, city traffic flows, neighborhoods and demographics were in vogue after World War I. These[citation needed] conjectures were expanded in 1929 by Hungarian author Frigyes Karinthy, who published a volume of short stories titled Everything is Different.

One of these pieces was titled "Chains," or "Chain-Links. " As a result of this hypothesis, Karinthy's characters believed that any two individuals could be connected through at most five acquaintances. A fascinating game grew out of this discussion. This idea both directly and indirectly influenced a great deal of early thought on social networks. Small world[edit] Milgram continued Gurevich's experiments in acquaintanceship networks at Harvard University in Cambridge, Massachusetts, U.S. Milgram's article made famous[7] his 1967 set of experiments to investigate de Sola Pool and Kochen's "small world problem.

" Research[edit] John L. Solipsism. Solipsism ( i/ˈsɒlɨpsɪzəm/; from Latin solus, meaning "alone", and ipse, meaning "self")[1] is the philosophical idea that only one's own mind is sure to exist. 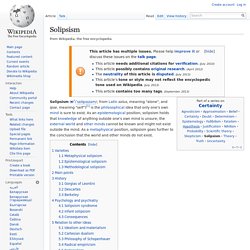 As an epistemological position, solipsism holds that knowledge of anything outside one's own mind is unsure; the external world and other minds cannot be known and might not exist outside the mind. Pragmatism. Pragmatism is a philosophical tradition that began in the United States around 1870.[1] Pragmatism is a rejection of the idea that the function of thought is to describe, represent, or mirror reality[citation needed]. 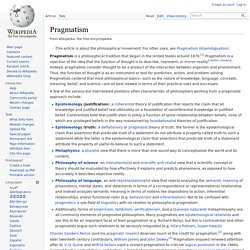 Instead, pragmatists consider thought to be a product of the interaction between organism and environment. Thus, the function of thought is as an instrument or tool for prediction, action, and problem solving. Pragmatists contend that most philosophical topics—such as the nature of knowledge, language, concepts, meaning, belief, and science—are all best viewed in terms of their practical uses and successes. A few of the various but interrelated positions often characteristic of philosophers working from a pragmatist approach include: Charles Sanders Peirce (and his pragmatic maxim) deserves much of the credit for pragmatism,[2] along with later twentieth century contributors, William James and John Dewey.[3] Pragmatism enjoyed renewed attention after W.