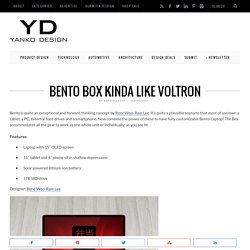 It’s quite a plausible scenario that most of use/own a tablet, a PC, external hard drives and a smartphone. Now combine the power of these to have fully customizable Bento Laptop! The Box accommodates all the gear to work as one whole unit or individually; as you see fit. Features Laptop with 15″ OLED screen11″ tablet and 4″ phone sit in shallow depressionsSolar powered lithium-ion battery1TB SSD drive. Remee - The Lucid Dream Mask. Snorg Tees - New Funny T-Shirts Every Week (Vintage T-Shirt, Cool Graphic Tee Shirts) Digital Hourglass Stopwatch Tells Time in Sand Pixels. Victorinox SSD official: up to 1TB of high-speed storage crammed in a Swiss Army Knife. 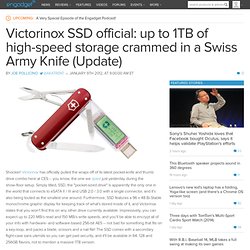 VSA brings more than 125 years of trusted precision, quality, function and versatility to its newest consumer electronics innovations, which is a burgeoning product category for the brand. The Victorinox SSD (Solid State Drive) and Victorinox Slim 3.0 USBs offer unprecedented data storage capacity with security measures fit for protecting the most confidential of personal and professional documents. The need for large capacity storage devices has skyrocketed as consumers and businesses access, catalog and maintain thousands of data-intensive applications as part of their everyday lives.

MyHogwarts. Wake Up with Wake-Up Light. Half-hour before you need to wake up, Philips Wake-Up Light emits light whose intensity increases gradually, simulating the sunrise. 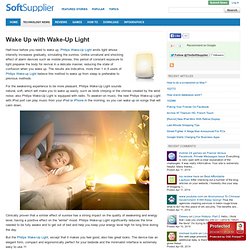 Unlike unnatural and shocking effect of alarm devices such as mobile phones, this period of constant exposure to light prepares the body for revival in a delicate manner, reducing the state of confusion when you wake up. The results are indicative, more than 1 in 8 users of Philips Wake-up Light believe this method to wake up from sleep is preferable to previous methods. For the awakening experience to be more pleasant, Philips Wake-Up Light sounds natural, soft, which will make you to wake up easily, such as birds chirping or the chimes created by the wind noise; also Philips Wake-Up Light is equipped with radio.

To awaken on music, the new Philips Wake-up Light with iPod port can play music from your iPod or iPhone in the morning, so you can wake up on songs that will calm down. Monday, September 20, 2010 8:32 pm | Technology News | 2,320 views. Throwable Panoramic Ball Camera has us seeing spherical potential. Each time there is a new way to capture media, especially when that means is inexpensive, the world goes nuts trying to see how they can show off their life and times with it. 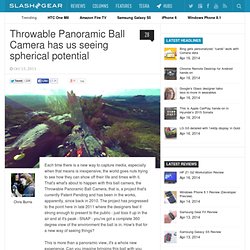 That's what's about to happen with this ball camera, the Throwable Panoramic Ball Camera, that is, a project that's currently Patent Pending and has been in the works, apparently, since back in 2010. The project has progressed to the point here in late 2011 where the designers feel it strong enough to present to the public - just toss it up in the air and at it's peak - SNAP - you've got a complete 360 degree view of the environment the ball is in. How's that for a new way of seeing things? This is more than a panoramic view, it's a whole new experience. Can you imagine bringing this ball with you everywhere you went? Have a look at this video and see how it strikes you: This device contains 36 mobile phone camera modules and takes a full sphere of images right at the peak of flight.

[via Pfeil] ImWatch. $13,000 Will Buy You Extreme Awesomeness. 07Mar So if your got a little of ten thousand dollars to spare you could be the proud owner of this amazing machine. 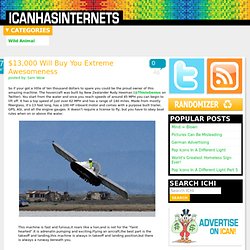 The hovercraft was built by New Zealander Rudy Heeman (@ThisIsGenius on Twitter). You start from the water and once you reach speeds of around 45 MPH you can begin to lift off. It has a top speed of just over 62 MPH and has a range of 140 miles. Made from mostly fiberglass, it’s 13 feet long, has a 100 HP inboard motor and comes with a purpose built trailer, GPS, ASI, and all the engine gauges.