If there's one thing for sure in this world, it's that as long as people are acting reckless, insane and just plain stupid (i.e. like people), there will always be plenty of material available for mindblowing - jawdropping and ingenius annual "Year in Review" videos! 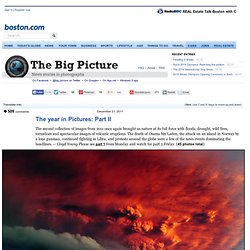 The death of Osama bin Laden, the attack on an island in Norway by a lone gunman, continued fighting in Libya, and protests around the globe were a few of the news events dominating the headlines. -- Lloyd Young Please see part 1 from Monday and watch for part 3 Friday. (45 photos total) A cloud of ash billowing from Puyehue volcano near Osorno in southern Chile, 870 km south of Santiago, on June 5. Puyehue volcano erupted for the first time in half a century on June 4, 2011, prompting evacuations for 3,500 people as it sent a cloud of ash that reached Argentina. The National Service of Geology and Mining said the explosion that sparked the eruption also produced a column of gas 10 kilometers (six miles) high, hours after warning of strong seismic activity in the area. The Year in Pictures: 2011 Part I. 2011, Buh-Bye! Greenpeace Year in Pictures 2011.

2011 was the year the bottom shook the top, the year the ballerina danced on the bull, and "The Protestor" was named Time Magazine person of the year. The faces in GP's Year in Pictures pay testament and tribute to their contribution and to the benefit of standing up and taking action. – avayaoli

Time lapse sequences of photographs taken by Ron Garan, Satoshi Furukawa and the crew of expeditions 28 & 29 onboard the International Space Station from August to October, 2011, shot at an altitude of around 350 km. All credit goes to them. – avayaoli 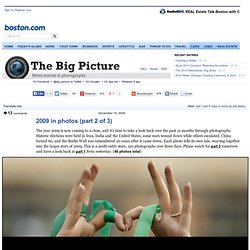 Historic elections were held in Iran, India and the United States, some wars wound down while others escalated, China turned 60, and the Berlin Wall was remembered 20 years after it came down. Each photo tells its own tale, weaving together into the larger story of 2009. This is a multi-entry story, 120 photographs over three days. Please watch for part 3 tomorrow and have a look back at part 1 from yesterday. (40 photos total) Before the Iranian election, a supporter of main challenger and reformist candidate Mir Hossein Mousavi forms a heart shape with her hands to indicate her support, while wearing green ribbons - the color of the party, amidst a festive atmosphere at an election rally rally in Tehran, Iran, Tuesday, June 9, 2009.