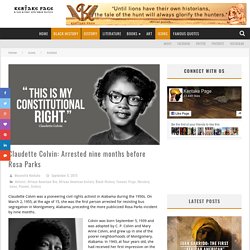 On March 2, 1955, at the age of 15, she was the first person arrested for resisting bus segregation in Montgomery, Alabama, preceding the more publicized Rosa Parks incident by nine months. Colvin was born September 5, 1939 and was adopted by C. P. Elyria Chronicle Telegram February 6, 2005. Black History Unsung Heroes: Claudette Colvin. Can you name the first woman who wouldn't give up her seat on a segregated bus in Montgomery, Alabama? 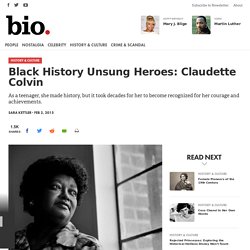 The answer isn't Rosa Parks. In fact, 15-year-old Claudette Colvin refused to stand up for a white passenger on March 2, 1955, nine months earlier than Parks. Though Colvin acted first, it was Parks who became an icon of the Civil Rights Movement. Teaching Tolerance - Diversity, Equity and Justice. Courtesty of the Browder Family On November 14, 1956, the front page of The New York Times, under the headline “High Court Rules Bus Segregation Unconstitutional,” reported that “an Alabama law and a city ordinance requiring segregation of races on intrastate buses were declared invalid by the Supreme Court today.” 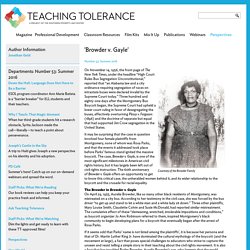 Three hundred and eighty-one days after the Montgomery Bus Boycott began, the Supreme Court had upheld a lower court ruling in favor of desegregating the buses, effectively overturning Plessy v. Ferguson (1896) and the doctrine of separate but equal that had supported Jim Crow segregation in the United States. It may be surprising that the case in question involved four female plaintiffs from Montgomery, none of whom was Rosa Parks, and that the events it addressed took place before Parks’ famous stand ignited the massive boycott. Claudette Colvin. Claudette Colvin Biography. Claudette Colvin: The Original Rosa Parks. Rosa Parks is the name you know. Claudette Colvin is a name you probably should. Bronx resident Claudette Colvin talks about segregation laws in the 1950s while having her photo taken Thursday, Feb. 5, 2009 in New York. 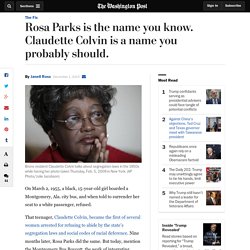 (AP Photo/Julie Jacobson) On March 2, 1955, a black, 15-year-old girl boarded a Montgomery, Ala. city bus, and when told to surrender her seat to a white passenger, refused. That teenager, Claudette Colvin, became the first of several women arrested for refusing to abide by the state's segregation laws and social codes of racial deference. Nine months later, Rosa Parks did the same. But today, mention the Montgomery Bus Boycott, the work of integrating public facilities, to anyone — regardless of their politics — and two names are likely to come up. 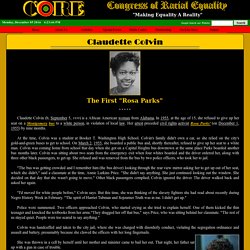 In 1955, at the age of 15, she refused to give up her seat on a Montgomery bus to a white person, in violation of local law. Her arrest preceded civil rights activist Rosa Parks' (on December 1, 1955) by nine months. At the time, Colvin was a student at Booker T. Washington High School. Colvin's family didn't own a car, so she relied on the city's gold-and-green buses to get to school. Claudette Colvin. Posted on: January 29, 2013in: Uncategorized One of the women who was arrested before Rosa Parks in 1955. 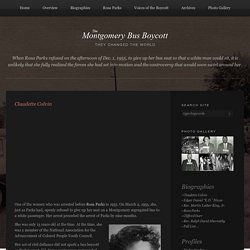 On March 2, 1955, she, just as Parks had, openly refused to give up her seat on a Montgomery segregated bus to a white passenger. Her arrest preceded the arrest of Parks by nine months. Claudette Colvin. Major movements and revolutions in history are marked by big events, but are always comprised of smaller events which often go overlooked. 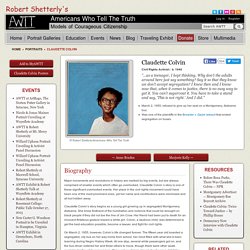 Claudette Colvin´s story is one of these significant overlooked events. Her place in the civil rights movement could have been one of the most prominent ones, yet her name and contributions were minimized and all but hidden away. Claudette Colvin’s story begins as a young girl growing up in segregated Montgomery, Alabama. Before Rosa Parks, There Was Claudette Colvin. Untitled. No Longer a Civil Rights Footnote: Claudette Colvin. “Young people think Rosa Parks just sat down on a bus and ended segregation, but that wasn’t the case at all,” Ms. 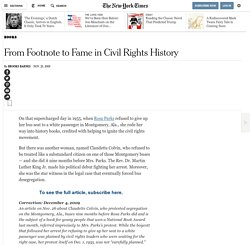 Colvin said in an animated interview at a diner near her apartment in the Parkchester section of the Bronx. “Maybe by telling my story — something I was afraid to do for a long time — kids will have a better understanding about what the civil rights movement was about.”