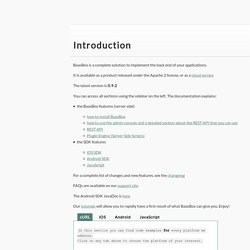 It is available as a product released under the Apache 2 license, or as a cloud service The latest version is 0.9.2 You can access all sections using the sidebar on the left. The documentation explains: For a complete list of changes and new features, see the changelog FAQs are available on our support site The Android SDK JavaDoc is here Our tutorials will allow you to rapidly have a first result of what BaasBox can give you.

In this section you can find code examples for every platform we address. You have two ways to install the iOS SDK.We suggest cocoapods: just add "pod 'BaasBoxSDK', '~> 0.9.0'" to your pod file.As an alternative you can download this repo ( and drag and drop the BaasBox-iOS-SDK folder on Xcode. /* The Android SDK is distributed as a jar. System Requirements Java VM 8 or later. Download the latest version here. BaasBox will start and it will listen on port 9000. JVM Parameters . . App Settings . The open source backend for your mobile app. Kinvey Service Link Uses ql.io to Integrate with Third Party Data Sources.

You know those times when you see an open-source project and you think – “wow, this will be so useful, I wanted to build this exact same thing one day!” 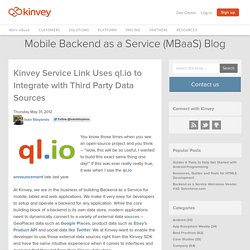 If this was ever really really true, it was when I saw the ql.io announcement late last year. At Kinvey, we are in the business of building Backend as a Service for mobile, tablet and web applications. We make it very easy for developers to setup and operate a backend for any application. While the core building block of a backend is its own data store, modern applications need to dynamically connect to a variety of external data sources – GeoPlaces data such as Google Places, product data such as Ebay’s Product API and social data like Twitter.

We at Kinvey want to enable the developer to use those external data sources right from the Kinvey SDK and have the same intuitive experience when it comes to interfaces and querying that they get from their Kinvey data store. This is not easy. Say your app needs to show a map with hotels on it. The Backend as a Service Ecosystem Map Update & New Trends: Migration Toward the Middle. Tuesday morning, before taxiing down the runway (the first time), my United Airlines flight ran a short video promoting a glorious future where dynamic mobile applications would let passengers book and change travel plans on the run. 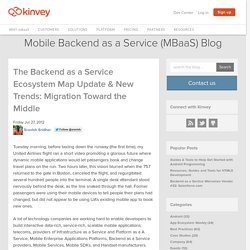 Two hours later, this vision blurred when the 757 returned to the gate in Boston, canceled the flight, and regurgitated several hundred people into the terminal. A single desk attendant stood nervously behind the desk, as the line snaked through the hall. Former passengers were using their mobile devices to tell people their plans had changed, but did not appear to be using UA’s existing mobile app to book new ones.

At Kinvey, we use the Subway Map to track the ecosystem, to plan strategic partnerships and figure out the best path to make more productive the companies, developers and development teams who use Kinvey’s Backend as as a Service to easily set up and maintain backends for their mobile, web and tablet apps. Watch this space. Unhosted web apps 30: baas. 30. 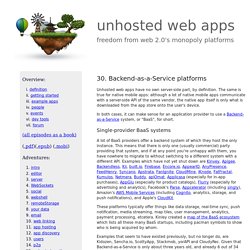 Backend-as-a-Service platforms Unhosted web apps have no own server-side part, by definition. The same is true for native mobile apps: although a lot of native mobile apps communicate with a server-side API of the same vendor, the native app itself is only what is downloaded from the app store onto the user's device. Apache Usergrid (incubating) — the BaaS not made for Hipsters. The Gospel of MBaaS- According to Anypresence Co-Founder (Part 1 of 2)

The Gospel of MBaaS- According to Anypresence Co-Founder (Part 2 of 2) Part 2 of InfoQ’s exclusive virtual interview with Anypresence cofounder Richard Mendis (RM)… InfoQ: In the Anypresence privacy policy it states, "AnyPresence may assign or transfer this privacy policy, and your user account and related information and data, to any person or entity that acquires or is merged with AnyPresence. 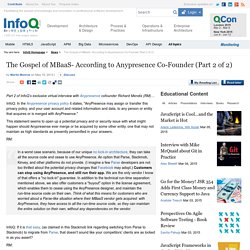 " This statement seems to open up a potential privacy and or security issue with what might happen should Anypresense ever merge or be acquired by some other entity, one that may not maintain as high standards as presently personified in your answers. In a worst case scenario, because of our unique no lock-in architecture, they can take all the source code and cease to use AnyPresence. An option that Parse, Stackmob, Kinvey, and other platforms do not provide. Rise of Mobile Backend as a Service (MBaaS) API Stacks · Developers: Here’s your updated backend ecosystems roadmap. Keeping track of the ecosystems available to software developers is no mean feat. 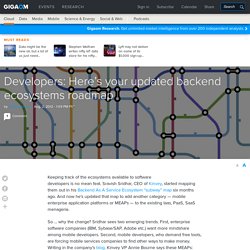 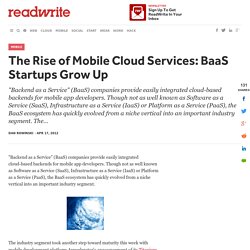 Though not as well known as Software as a Service (SaaS), Infrastructure as a Service (IaaS) or Platform as a Service (PaaS), the BaaS ecosystem has quickly evolved from a niche vertical into an important industry segment. The industry segment took another step toward maturity this week with mobile development platform Appcelerator's announcement of its Titanium 2.0 SDK, with significant backend cloud services tied into it. Meanwhile, Boston-based mobile cloud provider Kinvey also released its platform to the public. Many a startup has seen this scenario play out: The company comes up with a great idea and starts to build it, only to see several other startups release the same idea at the same time. They battle with each other over user interfaces and feature sets even as the market they created booms, and more and more companies jump in.

Understanding the Basics of Backend as a Service (BaaS) - Mobile News. MBaaS shoot-out: 5 clouds for building mobile apps. MBaaS (mobile back end as a service) is a fairly new product category that has largely supplanted MEAPs (mobile enterprise application platforms). 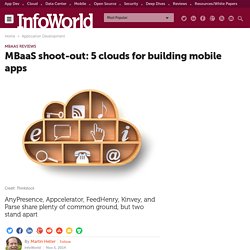 Over the past two months, I've closely examined five MBaaS systems: AnyPresence, Appcelerator, FeedHenry, Kinvey, and Parse. In this article, I'll wrap up the series by summarizing all five systems, surveying their common ground and key differences, and drawing conclusions. The general idea of MBaaS is that mobile apps need common services that can be shared among apps instead of being custom developed for each. Mobile apps using MBaaS follow a loosely coupled distributed architecture, and MBaaS systems themselves typically have more distributed architectures than MEAP systems, which tended to be unified middleware servers. Back ends don’t exist in isolation, so MBaaS systems provide some level of mobile client support.

For extra credit, MBaaS systems can generate mobile SDKs. Built.io Is Building an Enterprise MBaas Platform for IoT. With a leadership team that has worked with enterprise customers in the past, raw engineering’s new built.io believes that it is well-positioned to take on the burgeoning enterprise MBaaS market. 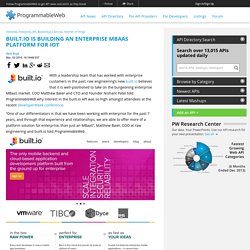 COO Matthew Baier and CTO and Founder Nishant Patel told ProgrammableWeb why interest in the built.io API was so high amongst attendees at the recent DeveloperWeek conference. “One of our differentiators is that we have been working with enterprise for the past 7 years, and through that experience and relationships, we are able to offer more of a platform solution for enterprise, than just an MBaaS”, Matthew Baier, COO at raw engineering and built.io told ProgrammableWeb. Solving enterprise pain points built.io is focused on the enterprise market, promising that it has built its whole product “from the ground up” with the enterprise customer in mind. “We are seeing the maturing of the MBaas market,” Baier said. “We give enterprises the ability to spin up quick apps. Prepping for the IoT future. UsergridProposal - Incubator Wiki.

Abstract Usergrid is a multi-tenant Backend-as-a-Service stack for web & mobile applications, based on RESTful APIs. 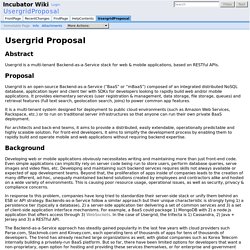