Info on architecture matters. Ranges from networking to high availability / scalability and other related matters. 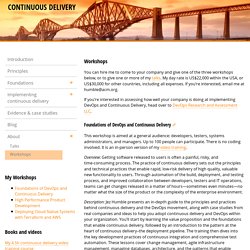 My day rate is US$22,000 within the USA, or US$30,000 for other countries, including all expenses. Microservices in Practice: From Architecture to Deployment - DZone Cloud. Browser unsupported. Ustwo – Human Made. Ustwo is a digital product agency, working with clients to create beautiful websites, building digital products, and launching new ventures. 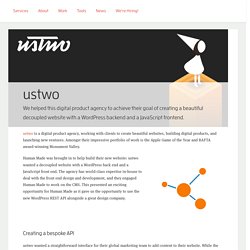 Unleash the Swarm: The Future of Warfare - War on the Rocks. Editor’s note: This is the third article in a six-part series, The Coming Swarm, on military robotics and automation as a part of the joint War on the Rocks-Center for a New American Security Beyond Offset Initiative. 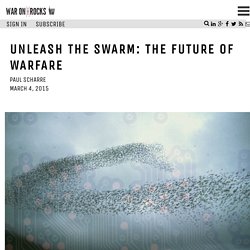 Read the first and second entries in this series. Could swarms of low-cost expendable systems change how militaries fight? Last November, Under Secretary of Defense Frank Kendall asked the Defense Science Board to examine a radical idea: “the use of large numbers of simple, low­ cost (i.e. ‘disposable’) objects vs. small numbers of complex (multi-functional) objects.” 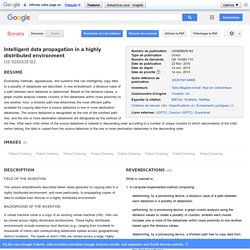 Using Blue-Green Deployment to Reduce Downtime and Risk. BlueGreenDeployment. Delivery tags: One of the goals that my colleagues and I urge on our clients is that of a completely automated deployment process. 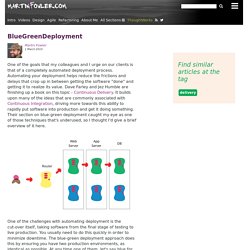 Automating your deployment helps reduce the frictions and delays that crop up in between getting the software "done" and getting it to realize its value. Dave Farley and Jez Humble are finishing up a book on this topic - Continuous Delivery. It builds upon many of the ideas that are commonly associated with Continuous Integration, driving more towards this ability to rapidly put software into production and get it doing something. One of the challenges with automating deployment is the cut-over itself, taking software from the final stage of testing to live production. The DOs and DON'Ts of Blue/Green Deployment - CloudNative. The term "blue/green deployment" is so misunderstood, we can't even decide on what to call it. 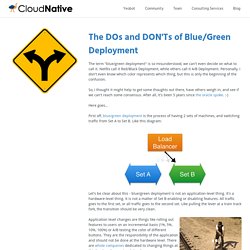 Netflix call it Red/Black Deployment, while others call it A/B Deployment. Personally, I don't even know which color represents which thing, but this is only the beginning of the confusion. Import an API into Azure API Management. In API Management, new APIs can be created and the operations added manually, or the API can be imported along with the operations in one step. 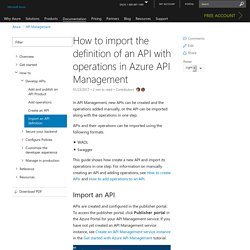 APIs and their operations can be imported using the following formats. WADLSwagger This guide shows how create a new API and import its operations in one step. Azure Resource Manager Overview. The infrastructure for your application is typically made up of many components – maybe a virtual machine, storage account, and virtual network, or a web app, database, database server, and 3rd party services. 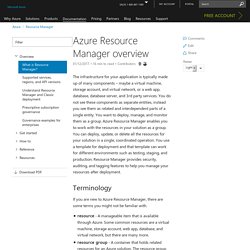 You do not see these components as separate entities, instead you see them as related and interdependent parts of a single entity. You want to deploy, manage, and monitor them as a group. Azure Resource Manager enables you to work with the resources in your solution as a group. You can deploy, update, or delete all the resources for your solution in a single, coordinated operation. Resource Management — Azure SDK for Python 2.0.0 RC6 documentation. The following code creates an instance of the management client. 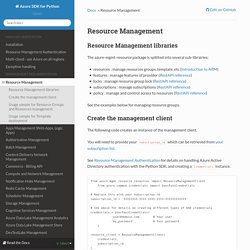 You will need to provide your subscription_id which can be retrieved from your subscription list. See Resource Management Authentication for details on handling Azure Active Directory authentication with the Python SDK, and creating a Credentials instance. Azure Resource Manager. Serverless Architecture – Linux Academy Blog. When people aren’t talking about Docker and containers, they’re usually talking about serverless architecture — code that runs without servers. 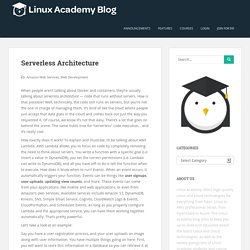 How is that possible? Well, technically, the code still runs on servers, but you’re not the one in charge of managing them. It’s kind of like the cloud, where people just accept that data goes in the cloud and comes back out just the way you requested it. Explore the Connect series from IBM. Developers who want to capitalize on their existing skills and applications can explore ways to connect to and from the cloud with the Connect series from IBM. The no-cost learning paths on developerWorks Connect to Cloud help developers learn how to use APIs in a hybrid cloud approach and guide developers through a sequence of e-learning activities.

Your starting place for accessing Connect resources, curated and organized by your level of experience and goals, is here: developerWorks Connect to Cloud. Dive in and start learning now. Keep checking back as we continue to add more learning paths. IBM API Connect. Refactoring to microservices, Part 3: Roadmap to microservices adoption. Step by step, move your applications from a monolith to a set of microservices. Fabric8 - an open source developer platform. All Things Distributed. SaltStack. Azure Infographics - Cloud Design Patterns. Cloud Design Patterns: Prescriptive Architecture Guidance for Cloud Applications. January 2014 Containing twenty-four design patterns and ten related guidance topics, this guide articulates the benefit of applying patterns by showing how each piece can fit into the big picture of cloud application architectures.

ØMQ - The Guide - ØMQ - The Guide. Object storage. Object storage (also known as object-based storage[1]) is a storage architecture that manages data as objects, as opposed to other storage architectures like file systems which manage data as a file hierarchy and block storage which manages data as blocks within sectors and tracks.[2] Each object typically includes the data itself, a variable amount of metadata, and a globally unique identifier.

Object storage can be implemented at multiple levels, including the device level (object storage device), the system level, and the interface level. In each case, object storage seeks to enable capabilities not addressed by other storage architectures, like interfaces that can be directly programmable by the application, a namespace that can span multiple instances of physical hardware, and data management functions like data replication and data distribution at object-level granularity. History[edit] Origins[edit] Development[edit] Architecture[edit] Optimizing the Netflix API. By Ben Christensen About a year ago the Netflix API team began redesigning the API to improve performance and enable UI engineering teams within Netflix to optimize client applications for specific devices. API gateway pattern.