Marc Andreessen's 'colonialism' gaffe? A symptom of Silicon Valley bias. After an irate Facebook board member wrote that India is better off under colonialism, many in Silicon Valley’s large and influential Indian population were offended. 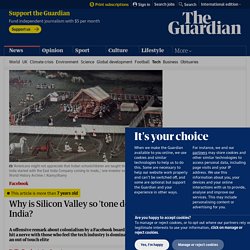 “People like [Facebook board member] Marc Andreessen are speaking from places of such massive privilege and are still so massively wrong,” said Rohit Sharma, a venture capitalist with True Ventures, which has raised $878m. “Someone in India’s needs are just the same as someone in San Francisco. How dare you imply otherwise? No.” On 8 February, India’s telecoms regulator blocked services such as Facebook’s Free Basics, a scheme to offer a small selection of low-bandwidth apps for free to users in the developing world.

The general argument for it in Silicon Valley has been that, yes, it comes with potentially unsavory strings attached, but it’s free, and it’s better than nothing. The Center for Reintegration - Employment - Mental Illness & The Workplace. Myth: Hiring employees with disabilities increases workers’ compensation insurance rates - Myth.pdf. Stigma and discrimination of mental health problems: workplace implications. There is a current policy spotlight on providing greater employment support for people with mental health problems [1,2]. 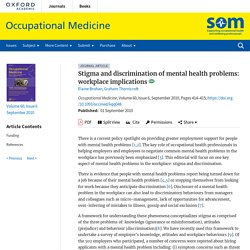 The key role of occupational health professionals in helping employers and employees to negotiate common mental health problems in the workplace has previously been emphasized [3]. Americans with Disabilities Act Questions and Answers. Businesses (public accommodations and commercial facilities) | Employment | State and local governments U.S. Equal Employment Opportunity Commission U.S. Department of Justice Civil Rights Division Barriers to employment, transportation, public accommodations, public services, and telecommunications have imposed staggering economic and social costs on American society and have undermined our well-intentioned efforts to educate, rehabilitate, and employ individuals with disabilities. Introduction to the ADA. The Americans with Disabilities Act (ADA) was signed into law on July 26, 1990, by President George H.W. 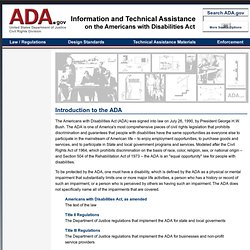 Bush. The ADA is one of America's most comprehensive pieces of civil rights legislation that prohibits discrimination and guarantees that people with disabilities have the same opportunities as everyone else to participate in the mainstream of American life -- to enjoy employment opportunities, to purchase goods and services, and to participate in State and local government programs and services. Modeled after the Civil Rights Act of 1964, which prohibits discrimination on the basis of race, color, religion, sex, or national origin – and Section 504 of the Rehabilitation Act of 1973 -- the ADA is an "equal opportunity" law for people with disabilities. 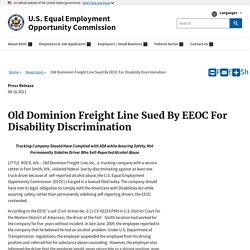 Equal Employment Opportunity Commission (EEOC) charged in a lawsuit filed today. The company should have met its legal obligation to comply with the Americans with Disabilities Act while assuring safety, rather than permanently sidelining self-reporting drivers, the EEOC contended. According to the EEOC’s suit (Civil Action No. 2:11-CV-02153-PKH in U.S. District Court for the Western District of Arkansas), the driver at the Fort Smith location had worked for the company for five years without incident. 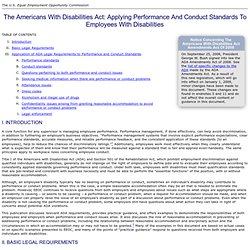 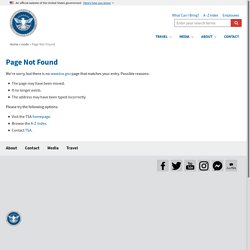 These laws are enforced by the U.S. How Do I Protect My Rights Under The Equal Employment Opportunity Laws At TSA? Any current or former TSA employee or applicant for employment who feel they have experienced unlawful discrimination, harassment or retaliation in either their employment or the hiring process may contact the Office of Civil Rights and Liberties to initiate the EEO complaint process in an attempt to resolve their complaints. Current or former TSA employees or applicants may raise any of the legal bases listed below when initiating the EEO complaint process.

Who We Are. Mission and Vision The mission of the Judge David L. 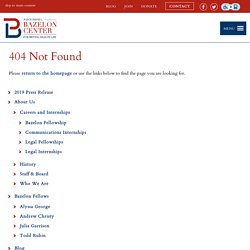