DARPA HACMS program for a software without pervasive vulnerabilities - Security Affairs. Technology in modern warfare has assumed a crucial role, every government is developing new cyber capabilities to be able to contrast and prevent cyber threats the fifth domain of warfare, the cyberspace. 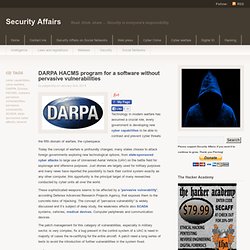 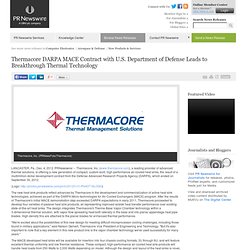 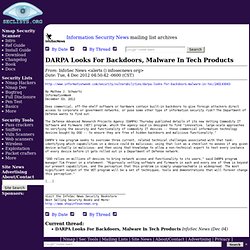 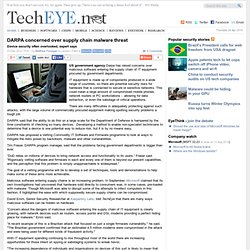 IT equipment is made up of components produced in a wide range of countries, so there are potential security risks for hardware that is connected to secure or sensitive networks. This could mean a large amount of compromised mobile phones, network routers or PC workstations - allowing for data extraction, or even the sabotage of critical operations. There are many difficulties in adequately protecting against such attacks, with the large volume of commercially procured equipment making spotting security problems a tough job. DARPA Looks For Backdoors, Malware In Tech Products - Security - In the wake of concerns about Huawei and ZTE equipment security, defense research agency seeks help identifying backdoors and malicious capabilities in software and firmware. 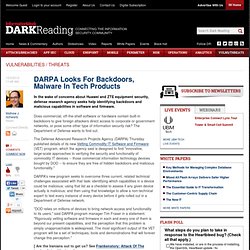 Does commercial, off-the-shelf software or hardware contain built-in backdoors to give foreign attackers direct access to corporate or government networks, or pose some other type of information security risk? The Department of Defense wants to find out. DARPA Project Using LLVM For Better Code Security. A software research project being funded by the United States' Defense Advanced Research Projects Agency (DARPA) with its Cyber Fast Track program is looking at ways for providing a flexible and integrated security infrastructure by using LLVM for dynamic and static security tasks. 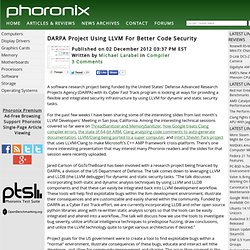 For the past few weeks I have been sharing some of the interesting slides from last month's LLVM Developers' Meeting in San Jose, California. Among the interesting technical sessions covered so far were on ThreadSanitizer and MemorySanitizer, how Google treats Clang compiler errors, the state of 64-bit ARM, Clang analyzing code comments to auto-generate documentation, LLVM/Clang being ported to a super computer, and Intel's Shevlin Park project that uses LLVM/Clang to make Microsoft's C++ AMP framework cross-platform. DARPA program aims to find, shut backdoor malware holes in commercial IT devices. It is likely every security IT person's nightmare: the new mobile phone, network router or computer they just tied into the network actually has a secret backdoor that lets the malicious users or governments have unfettered access to the company's assets. 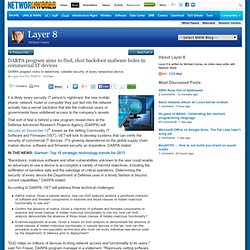 That sort of fear is behind a new program researchers at the Defense Advanced Research Projects Agency (DARPA) will discuss on December 12th known as the Vetting Commodity IT Software and Firmware (VET). VET will look to develop systems that can verify the security of commercial IT devices. IT's growing dependence on the global supply chain makes device, software and firmware security an imperative, DARPA stated. IN THE NEWS: Gartner: Top 10 strategic technology trends for 2013. Government Sales Insider. November 7, 2013 by Mohamad Elbarasse by Mohamad Elbarasse, Analyst As agencies take on a more data-centric focus to achieving their missions, it would appear as though FY 2014 is the year of big data and a slew of agencies have funded initiatives in play that will set the bar for what analytics can bring to the table. 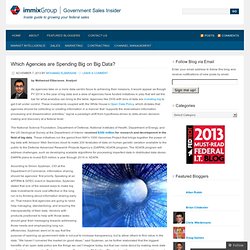 Agencies like DHS with tons of data are investing big to get it all under control. These investments coupled with the White House’s Open Data Policy, which dictates that agencies should be collecting or creating information in a manner that “supports the downstream information processing and dissemination activities,” signal a paradigm shift from hypothesis-driven to data-driven decision making and discovery at a federal level. The National Science Foundation, Department of Defense, National Institutes of Health, Department of Energy, and the US Geological Survey at the Department of Interior received $200 million for research and development in the field of big data. Is the Pentagon ready for an alien invasion? Report: DARPA Starting Offensive Cyber Program. Site: DARPA.mil The Defense Advanced Research Projects Agency has launched a program drawing from computer game companies, universities and private sector entities to develop the agency’s cyber capabilities. 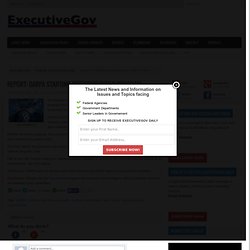 According to the Washington Post, DARPA is launching a five-year, $110 million research project named Plan X in order to experiment ways the military can go about defending the Defense Department’s computer systems. DARPA will solicit proposals this summer for the program in order create a new map of the global cyber space that continuously updates itself. The Post reports the proposed map would give commanders the ability to identify targets and disable them via Internet computer code.

Plan X also will include creating an operating system capable of launching and surviving attacks similar to an armored tank, the Post reportd. Additionally, DARPA plans to develop automated decision processes based on pre-planned scenarios. share. Pentagon's Blueprint For Full-Fledged Cyberwar Eurasia Review. By RT The wheels of the war machine are ever turning inside the Pentagon, but the Defense Department’s latest endeavor won’t involve fighter jets and armored tanks. 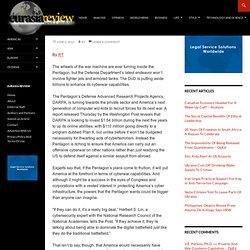 The DoD is putting aside billions to enhance its cyberwar capabilities. The Pentagon’s Defense Advanced Research Projects Agency, DARPA, is turning towards the private sector and America’s next generation of computer wiz-kids to recruit forces for its next war. A report released Thursday by the Washington Post reveals that DARPA is looking to invest $1.54 billion during the next five years to up its online abilities, with $110 million going directly to a program dubbed Plan X, but unlike before it won’t be budgeted necessarily for thwarting acts of cyberterrorism. DARPA seeks RF data backbone that would give fiber-optic capacity. DARPA seeks RF data backbone that would give fiber-optic capacity By William WelshDec 19, 2012 The Defense Advanced Research Projects Agency plans to develop a fiber-optic-equivalent communications backbone on a radio frequency carrier that can be deployed worldwide to give U.S. military forces high-speed network connections anywhere they are deployed around the globe, the agency said Dec. 14.

DARPA’s 100-gigabits per second RF Backbone program, known as 100G, will require a data link capable of achieving a range greater than 200 kilometers between airborne assets and a range greater than 100 kilometers between an airborne asset (at 60,000 feet) and the ground, the agency said. DARPA begins work on 100Gbps wireless tech with 120-mile range.

DARPA has begun development of a wireless communications link that is capable of 100 gigabits per second over a range of 200 kilometers (124mi). Officially dubbed “100 Gb/s RF Backbone” (or 100G for short), the program will provide the US military with networks that are around 500 times faster than its current wireless links. In essence, DARPA wants to give deployed soldiers the same kind of connectivity as a high-bandwidth, low-latency fiber-optic network. In the case of Afghanistan, for example, the US might have a high-speed fiber link to Turkey — but the remaining 1,000 miles to Afghanistan most likely consists of low-bandwidth, high-latency links. It’s difficult (and potentially insecure) to control UAVs or send/receive intelligence over these networks, and so the US military instead builds its own wireless network using Common Data Link.

Plan X: DARPA’s new project seeks to make cyberwarfare a routine part of U.S. military operations. DARPA Announces Proposer‘s Workshop for Its ’Plan X’ Program to Research Cyberwarfare Tactics. In this March 8, 2012 photo, Norwich University student Adam Marenna, of Belair, Md., works on computers in Northfield, Vt. Deep in the bowels of a building on the campus of the nations oldest private military academy, students from across the globe are being taught to fight the war of the future.