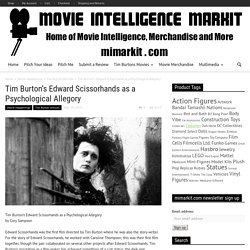 For the story of Edward Scissorhands, he worked with Caroline Thompson; this was their first film together, though the pair collaborated on several other projects after Edward Scissorhands. Tim Burton’s reputation as a film-maker has achieved something of a cult status; the dark and sometimes disturbing imagery employed in many of his films can either alienate or elevate a person, depending on their preference; Edward Scissorhands is also something of a cult film. His unique and recognizable visual art and tendency to sympathize with the outsider has led some to see Burton as an auteur. Asperger’s Syndrome has recently been the center of much attention; the disorder was reported in 1944 by physician Hans Asperger, at around the same time autism was being discovered. Works Cited Bauer, Stephen. Burton, Tim.

A Brief Illustration of Tim Burton’s Auteurship; Edward Scissorhands and Normalcy. While definitions of auteurship are many and ranged, there are certain qualities which are undeniably consistent in the classification of film auteurs. 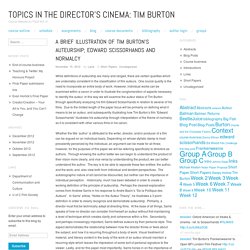 One crucial quality is the need to incorporate an entire body of work. However, individual works can be examined within a canon in order to illustrate the conglomeration of aspects necessary to identify the auteur. In this way we will examine the auteur status of Tim Burton through specifically analyzing his film Edward Scissorhands in relation to several of his films. Due to the limited length of the paper focus will be primarily on defining what it means to be an auteur, and subsequently illustrating how Tim Burton’s film “Edward Scissorhands” illustrates his auteurship through interpretation of the theme of normalcy as it is consistent with other various films in his canon.

Whether the title ‘author’ is attributed to the writer, director, and/or producer of a film can be argued on an individual basis. References Sarris, Andrew. Edward Scissorhands - Supplemental Materials; LESSON PLAN: REVIEW OF LITERARY DEVICES ANDWRITING EXERCISES USING EDWARD SCISSORHANDS Rationale: Edward Scissorhands provides an opportunity to review literary devices which have been taught in prior lessons and to exercise writing skills, using a popular movie. 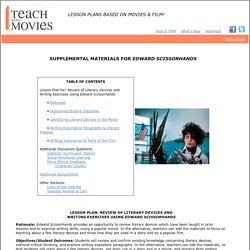 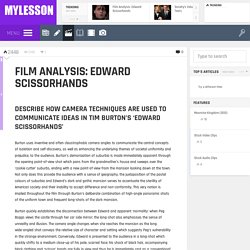 The colourful settings and often dark lighting, particularly apparent the shadows of the ruined attic to the elongated staircases, also reflects not only Edward’s isolation, but also Burton’s admonishment of a prejudiced society. Colour is used to immediately signify the distinction between good and evil; the kitsch 1950s palette of the Florida community is presented in very bright colours which suggest safety and normalcy. This is juxtaposed to Edward’s dark, twisting mansion but ironically, Burton later presents the local community as far uglier and frightening than the ghostly Edward; his haunting appearance and sinister castle belies his child-like innocence and enormous heart. The early scene in which the two worlds collide – when Peg meets Edward – is shot in a basic tone of black, much like Edward’s clothing. Sound. Tim Burton’s Edward Scissorhands as a Psychological Allegory - Movie Intelligence Marketplace Mimarkit.com - Movie Merchandise, New and More. 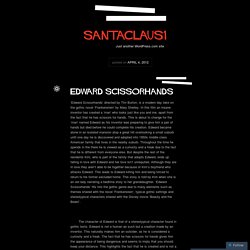 In this film an insane inventor has created a ‘man’ who looks just like you and me, apart from the fact that he has scissors for hands. This is about to change for the ‘man’ named Edward as his inventor was preparing to give him a pair of hands but died before he could complete his creation. Edward became alone in an isolated mansion atop a great hill overlooking a small suburb until one day he is discovered and adopted into 1950s middle class American family that lives in the nearby suburb.

Throughout the time he spends in the there he is viewed as a curiosity and a freak due to the fact that he is different from everyone else. But despite the rest of the residents Kim, who is part of the family that adopts Edward, ends up falling in love with Edward and her love isn’t unrequited.