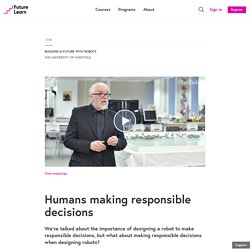 And there's a lot of talk about them saving a lot of lives on the road. I kind of tend to believe that, that in the long run, that will be the case. Google is the leading manufacturer of autonomous cars. And the thing about the Google car is that the new one drives at 25 miles an hour and has no steering wheel at all. So blind people can get into it, whatever. 0:44Skip to 0 minutes and 44 seconds The law is you have to sit with your hands above the steering wheel, the car drives itself, and be ready to grab it if there's an emergency. 1:12Skip to 1 minute and 12 seconds Suddenly, you ask the pilot to get involved, and the plane crashes because they're not ready for it. 1:42Skip to 1 minute and 42 seconds There's one guy standing over there on his bicycle, there's a group of children over at the other side, and there's a group of old people in a bus. Sam Harris: Science can answer moral questions. Paul Zak: Trust, morality.

Why We Should Be Moral. The trolley and the psychopath. Stop me if you’ve heard this one. 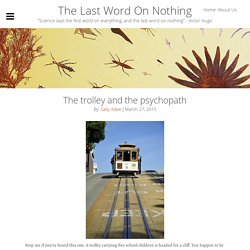 A trolley carrying five school children is headed for a cliff. You happen to be standing at the switch, and you could save their lives by diverting the trolley to another track. But there he is – an innocent fat man, picking daisies on that second track, oblivious to the rolling thunder (potentially) hurtling his way. Divert the trolley, and you save the kids and kill a person. Do nothing, and you have killed no one but five children are dead. This kind of thought experiment is known as a sacrificial dilemma, and it’s useful for teaching college freshmen about moral philosophy. Kahane, deputy director of Oxford’s Uehiro Centre for Practical Ethics, has never been a big fan of the sacrificial dilemma. Phil osophically, the sacrificial dilemma has a narrow purpose. So what do philosophers mean by utilitarianism? That’s a demanding moral framework! The results, published in January in the journal Cognition, were not encouraging.

Image credits. Postprandial Reflections: Calvin and Hobbes on Ethics. Ethical Decision Making. Deaf Belgian twins going blind choose to be euthanized. Distraught about going blind, 45-year-old deaf twin brothers from Belgium chose to be euthanized because they couldn't bear not to see one another, according to reports from Flanders. 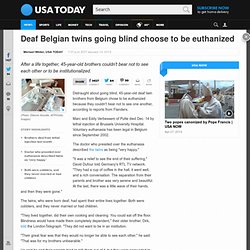 Marc and Eddy Verbessem of Putte died Dec. 14 by lethal injection at Brussels University Hospital. Voluntary euthanasia has been legal in Belgium since September 2002. The doctor who presided over the euthanasia described the twins as being "very happy. " "It was a relief to see the end of their suffering," David Dufour told Germany's RTL TV network. "They had a cup of coffee in the hall, it went well, and a rich conversation. The twins, who were born deaf, had spent their entire lives together.

"They lived together, did their own cooking and cleaning. "Their great fear was that they would no longer be able to see each other," he said. He said he and their parents tried to talk them out of it, but they were persuaded to let them die as they wanted. Here's the law and researchers' summary of what it requires: Some Moral Dilemmas. The Trolley Problem, not in Grassian. 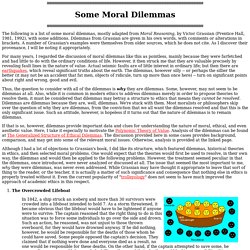 Suggested by Philippa Foot (1920-2010), daughter of Esther, the daughter of President Grover Cleveland, but of British birth because of her father, William Sidney Bence Bosanquet. A trolley is running out of control down a track. In its path are five people who have been tied to the track by a mad philosopher. Fortunately, you could flip a switch, which will lead the trolley down a different track to safety. Unfortunately, there is a single person tied to that track. This is a classic "right vs. good" dilemma.

The Costly Underwater Tunnel Compare: 112 men were killed during the construction of Hoover Dam on the Nevada-Arizona border (the "official" number was 98, but others had died from causes more difficult to identify -- or easier to ignore -- like by carbon monoxide poisoning): The first to die was a surveyor, J.G.