Miyamato Musashi The Way of No Sword 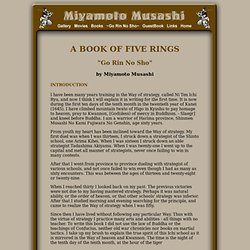 It is now during the first ten days of the tenth month in the twentieth year of Kanei (1645). I have climbed mountain Iwato of Higo in Kyushu to pay homage to heaven, pray to Kwannon, [God(dess) of mercy in Buddhism. - Slaegr] and kneel before Buddha. I am a warrior of Harima province, Shinmen Musashi No Kami Fujiwara No Genshin, age sixty years. From youth my heart has been inclined toward the Way of strategy. After that I went from province to province dueling with strategist of various schools, and not once failed to win even though I had as many as sixty encounters. 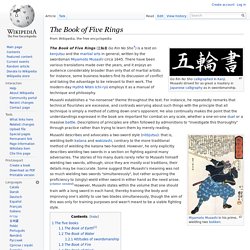 Is a text on kenjutsu and the martial arts in general, written by the swordsman Miyamoto Musashi circa 1645. There have been various translations made over the years, and it enjoys an audience considerably broader than only that of martial artists: for instance, some business leaders find its discussion of conflict and taking the advantage to be relevant to their work. The modern-day Hyōhō Niten Ichi-ryū employs it as a manual of technique and philosophy. Musashi establishes a "no-nonsense" theme throughout the text. For instance, he repeatedly remarks that technical flourishes are excessive, and contrasts worrying about such things with the principle that all technique is simply a method of cutting down one's opponent. Musashi describes and advocates a two-sword style (nitōjutsu): that is, wielding both katana and wakizashi, contrary to the more traditional method of wielding the katana two-handed. The five books[edit] Miyamoto Musashi Quotes (Author of A Book of Five Rings) 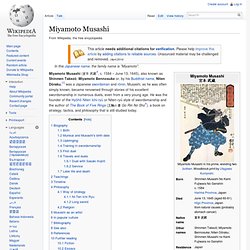 , c. 1584 – June 13, 1645), also known as Shinmen Takezō, Miyamoto Bennosuke or, by his Buddhist name, Niten Dōraku,[1] was a Japanese swordsman and rōnin. Musashi, as he was often simply known, became renowned through stories of his excellent swordsmanship in numerous duels, even from a very young age. The Way of No-Sword. One day Musashi is challenged by a belligerent samurai while the two are crossing between islands by ferry. 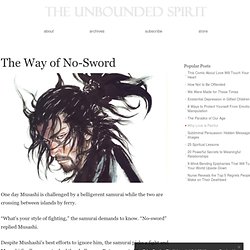 “What’s your style of fighting,” the samurai demands to know. “No-sword” replied Musashi. Despite Mushashi’s best efforts to ignore him, the samurai picks a fight and Musashi finally agrees to duel the challenger. But, suggests Musashi, rather than fight on the cramped ferry, they should instead fight on that sandbar the ferry is approaching. The challenger quickly agrees and leaps overboars as the ferry passes the sandbar. Landing on the sandbar, the samurai whirls, sword at the ready–only to watch the ferry continue on toward the far shore–a, smiling, waving Musashi still on board! Hours later, drenched in humiliation and dripping rage, the challenger finally wades ashore where he finds Musashi patiently fishing out of a small rowboat. 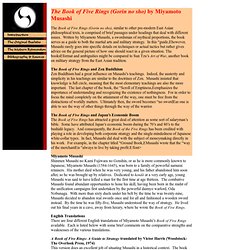