Facebook fires trending team, and algorithm without humans goes crazy. 8 Ways to Use Psychology in Your Social Media Marketing. Social media is just one massive social gathering of regular people. 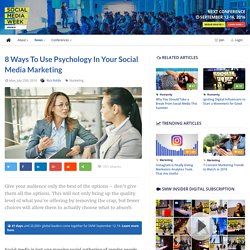 Even though our activity is online, the same psychological traits that humans exhibit offline are just as true in the realm of digital communications. In fact, you could even say that social media magnifies these psychological traits. It cuts out the mundane moments, and only allows the higher highs, and the lower lows to appear. Marketing and psychology have gone hand in hand since the early days of the Madison Men working in the agencies of New York. 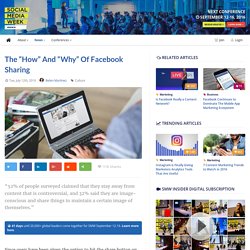 It’s no mystery that we are sharing like crazy, but what and how are we sharing? Fractl published a two-part study (more info here) on The Sharing Habits of the Average Facebook User and The Motivations for Sharing on Facebook, which gave insight into how and why different sexes and ages are sharing content on the most popular social media site in the world. Millennials vs. Baby-Boomers While the 38% of the 2,000 people surveyed claimed to share content less than once a week, male Millennials are the least likely to share content.

Is Facebook Really a Content Network? - Social Media Week. Earlier in April, Mark Zuckerberg stood before the eager crowd at Facebook’s annual F8 conference and declared, “We’ve gone from a world of isolated communities to a global community, and we are all the better off for it… I hope that we have the courage to see that the path forward is to bring people together, not tearing them apart.” 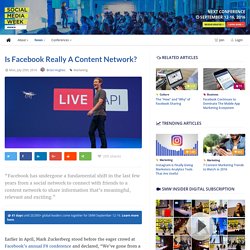 Sounding more like an aspiring politician than the CEO of a social network, Zuckerberg laid out a bold vision for Facebook. He envisions Facebook evolving in three stages: from technology to product to ecosystem. Facebook already dominates the messaging app market with Messenger and WhatsApp. The company is getting a jumpstart in the augmented reality and virtual reality race, developing Oculus Rift, Gear, and AR Glasses. 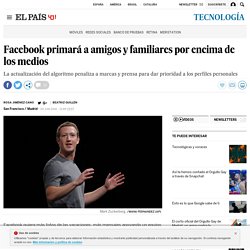 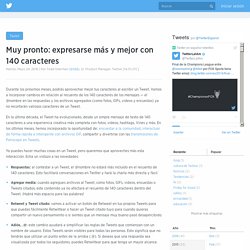 Facebook Live adds nonstop, 24-hour video. The new feature is an upgrade from the 90-minute limit previously imposed on streams using Facebook's Live API, but it comes with the drawback of not allowing for archiving or rewind streams to play back later. 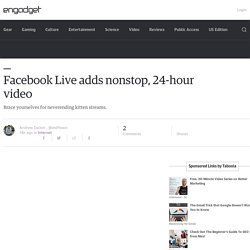 Which is unfortunate, considering the Facebook Live team just rolled out a feature to jump to the best bits based on reactions and comments. For now, however, the endless feeds seem to be mostly taking the place of the once-ubiquitous livecams like Explore.org's Eagle Cam. Removing Twitter's 140-character limit is Jack Dorsey's biggest gamble yet.

Many Twitter devotees met the prospect with an instant backlash, and it’s easy to see why. 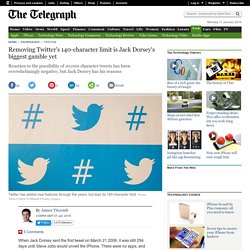 A huge part of Twitter’s appeal, they say, is that tweets are short (if not always sweet). The cap allows users to keep up with the dozens of tweets a minute that pop up on their feeds, and it forces the public figures, pundits and comedians to keep things concise. Long tweets would probably be displayed as 140 characters with a "read more" button to see longer ones, but opponents still felt the change would ruin the magic of Twitter: hashtags were started up in protest. But it’s also easy to see why Twitter wants to change things. "We’ve spent a lot of time observing what people are doing on twitter, and we see them taking screenshots of text and tweeting it," Dorsey wrote in his own screenshotted statement (weighing in at 1,315 characters).

"Instead, what if that text…was actually text? The bigger picture is that Twitter is in trouble. Facebook at Work launching in coming months. Twitter Is Testing Timelines That Aren't in Chronological Order. Are you a loyal Twitter user? 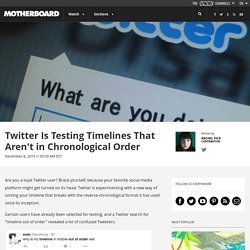 Brace yourself, because your favorite social media platform might get turned on its head: Twitter is experimenting with a new way of sorting your timeline that breaks with the reverse-chronological format it has used since its inception. Certain users have already been selected for testing, and a Twitter search for “timeline out of order” revealed a lot of confused Tweeters. Image: Rachel Pick Here's a screenshot displaying the new nonsensical timeline format. Twitter ya no recortará las imágenes, ¿qué significa para las marcas y community managers?

Facebook is going to fill your iPhone lock screen with news and weather. The Facebook poke is back, but this time there's a bit more to it. 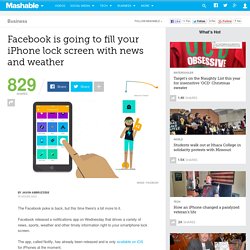 Facebook released a notifications app on Wednesday that drives a variety of news, sports, weather and other timely information right to your smartphone lock screen. The app, called Notify, has already been released and is only available on iOS for iPhones at the moment. Twitter officially kills off favorites and replaces them with likes. Twitter's "favorite" button, the service's primary way for users to signal agreement, acknowledgement, laughter, support, and occasionally (and perversely!) 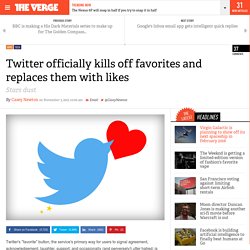 Utter hatred, is officially dead. Twitter estudia cómo acabar con la limitación de 140 caracteres. Instagram 7.5 brings support for landscape and portrait images and videos. Ever since its inception, Instagram has always allowed clicking and uploading images (and later videos) in the 1:1 square aspect ratio. Like Twitter's 140 character limit, it was a part of the platform's appeal, or a drawback, depending upon how you chose to look at it.

Off late, a lot of people had begun uploading non-square images to Instagram using image editing tools to add whitespace to the sides. Community manager: La @policia se queda huérfana en las redes sociales. Se va. Google on Desktop can now search for tweets. If you happen to be an avid Twitter user and often Google things on your mobile then you have most-likely noticed that the search giant can quite conveniently bring up Twitter results for you. The integration happened back in May and until now was only limited to mobile. Today, Google and Twitter bring the feature to your desktop as well. The announcement was made via Google's Twitter account in a typical lighthearted manner: Facebook appears to be testing new profile pages for mobile users.

Facebook Confirms Live Broadcasting Will Soon Open To Journalists And Verified Profiles. Facebook plans to open up its Periscope livestreaming competitor to more than just celebrities. In replies to requests from Verified Pages about when they’d get access to the VIP-only Facebook app Mentions that houses Facebook Live, the company wrote “In the future, Mentions will be available to verified Profiles”. When I asked if that would include Facebook Live, it told me it plans to roll Mentions out to verified Profiles soon, which includes access to Live.

Given Facebook changed its tune from just a week ago when it was cagey about when more people would get Live, things seem to be moving quickly and I’d expect Live to open up to Verified Profiles before the holidays. On August 5th, Facebook launched Live, which lets broadcasters instantly start a live video stream on Facebook. Users can tune in to watch in real-time and submit comments that appear on the broadcaster’s screen. Facebook Live, Periscope, and Meerkat (from left) Normal users were not given broadcast access. Twitter finally drops the 140-character limit from direct messages. Twitter's 140-character limit is going away, at least for the private messages you send on the service. As promised, the company said today that it will now allow messages of up to 10,000 characters in its mobile apps, desktop apps, and the web. It will also work in third-party apps, such as Tweetbot, the company says. "It's the No. 1 request we get from folks," said Sachin Agarwal, product manager for DMs, in an interview.

Facebook reportedly in talks to put music videos in your news feed. Facebook is trying to set up deals with major record companies to put music videos in your News Feed, both Billboardand The New York Times report, as part of an attempt to capture a share of the market currently dominated by YouTube. According to the publications, the social network has held preliminary discussions with multiple labels over the past few weeks, and is looking to start inserting videos selected by record companies in the coming months. The social network reportedly plans to share ad revenue with labels, but terms of the deal have not yet been finalized.

Facebook is making it easier to declutter your News Feed. Facebook's News Feed is unquestionably one of the most important parts of the site — it's the first thing you see when you visit, and the quality of that experience probably dictates to a large degree how useful you find Facebook in general. The company has spent a lot of time working on ways to make sure it surfaces interesting and relevant content — but no matter how good its algorithms are, there's a good chance that your page is often littered with stuff from "friends" you're not that close with and pages you've liked over the years that you can't remember liking in the first place. That's why Facebook is rolling out a new set of controls that make it a lot easier to see more of what's relevant to you in your News Feed — and perhaps more importantly, it makes it easier to banish things you don't care about. Facebook has revealed a new logo. Facial-Recognition Concerns Keep Facebook ‘Moments’ From Europe.