Google Maps. Molotov is defining the future of TV. There’s some level of excitement around Molotov right now. 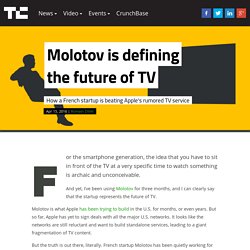 Bots may be cool, but DigitalGenius thinks it found a better way. Bots seem to be all the rage this week, thanks to the release of Facebook’s Messenger Bot program at F8, but not everyone sees bots as the way to keep up with the customer service glut. 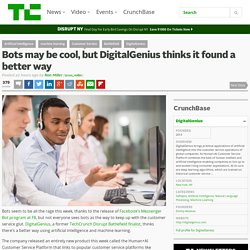 DigitalGenius, a former TechCrunch Disrupt Battlefield finalist, thinks there’s a better way using artificial intelligence and machine learning. The company released an entirely new product this week called the Human+AI Customer Service Platform that links to popular customer service platforms like Salesforce, Zendesk and Oracle. The trouble with bots is they are limited by their programmed actions, says Mikhail Naumov, chief strategy officer at DigitalGenius. “While chat bots are cool and are getting lots of attention today — they often break once the user asks for something that has not been pre-programmed into the bot. The Three P's of Email Marketing.

April 06, 2016 A recent report sheds light on the people, processes, and products marketers should incorporate today. 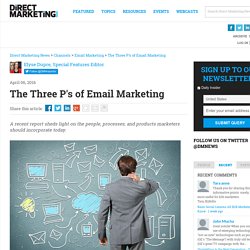 Finding the right people, processes, and products to decipher the ideal email marketing strategy is like trying to crack a cryptic code. There's endless trial and error, but when marketers hit on the right combination, the results are rewarding. To shed some light on the talent, strategies, and tools marketers are leveraging today, email testing and analytics platform provider Litmus surveyed 900 email marketing professionals for its "2016 State of Email Production" report. The Three P's of Email Marketing. Twitter to Honor Those Who Master Direct Marketing Skills. Explicit cookie consent. Explicit cookie consent. Explicit cookie consent. Keeping secrecy the exception, not the rule: An issue for both consumers and businesses - Microsoft on the Issues. This morning we filed a new lawsuit in federal court against the United States government to stand up for what we believe are our customers’ constitutional and fundamental rights – rights that help protect privacy and promote free expression. 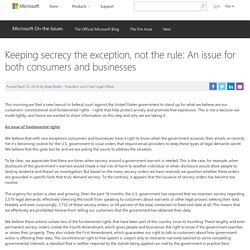 This is not a decision we made lightly, and hence we wanted to share information on this step and why we are taking it. An issue of fundamental rights We believe that with rare exceptions consumers and businesses have a right to know when the government accesses their emails or records. Yet it’s becoming routine for the U.S. government to issue orders that require email providers to keep these types of legal demands secret.

Apple Pursues New Search Features for a Crowded App Store. Apple Inc. has constructed a secret team to explore changes to the App Store, including a new strategy for charging developers to have their apps more prominently displayed, according to people familiar with the plans. 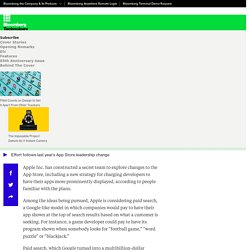 Among the ideas being pursued, Apple is considering paid search, a Google-like model in which companies would pay to have their app shown at the top of search results based on what a customer is seeking. For instance, a game developer could pay to have its program shown when somebody looks for “football game,” “word puzzle” or “blackjack.” Paid search, which Google turned into a multibillion-dollar business, would give Apple a new way to make money from the App Store. The growing marketing budgets of app developers such as “Clash of Clans” maker Supercell Oy have proven to be lucrative sources of revenue for Internet companies, including Facebook Inc. and Twitter Inc. A Conversation With Asians on Race. The Three P's of Email Marketing. Microsoft Sues Justice Department to Protest Electronic Gag Order Statute. Photo Big technology companies have usually played a defensive game with government prosecutors in their legal fight over customer information, fighting or bowing to requests for information one case at a time. 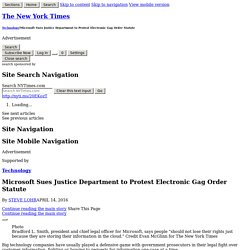 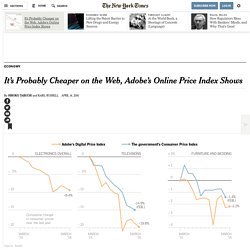 Well, not everything, but a lot of things, according to Adobe, which has come up with a new index to track the price of goods. The company gets its results by crunching data on millions of online transactions it tracks through its online marketing service. The price of televisions online fell a cumulative 20.3 percent from February 2015 to February 2016, according to the latest numbers from Adobe’s Digital Price Index, released on Thursday. The ’ , by contrast, logged a 15 percent drop in TV prices over the same time period. Explicit cookie consent. 1. 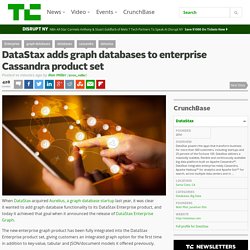 The new enterprise graph product has been fully integrated into the DataStax Enterprise product set, giving customers an integrated graph option for the first time in addition to key-value, tabular and JSON/document models it offered previously. After working closely with 10 Beta customers including Kaiser Permanente, Cambridge Intelligence and Linkurious for the past couple of months, the company is ready to release the product to the world. The new graph database is built on top of the open source Titan graph database, which was originally developed by Aurelius. Graph visualization in DataStax studio. Photo Credit: DataStax. Graph databases are different from relational in several key ways. Featured Image: ra2studio/Shutterstock. The Verge. Tested In-Depth: Oculus Rift vs. HTC Vive. Cannot Backup error 0x81000019. Cannot create shadow copy...

Thanks for your posting. 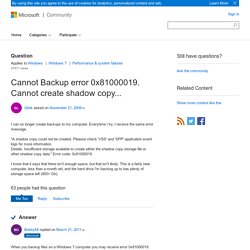