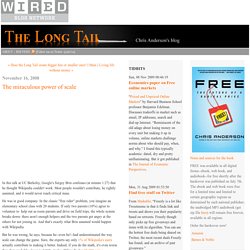 Discusses tradeoffs in market such as email, IP addresses, search and dial-up Internet. "Reminiscent of the old adage about losing money on every unit but making it up in volume, online markets challenge norms about who should pay, when, and why. " I found this typically academic: dated, dry and pretty unilluminating. But it got published in The Journal of Economic Perspectives. Mon, 31 Aug 2009 01:53:50 From Mashable: “Freezly is a lot like Tweetmeme in that it finds link and tweets and shows you their popularity based on retweets. Fri, 28 Aug 2009 02:08:25 From Cellular News. Mon, 10 Aug 2009 20:54:23 From the LA Times: “Industry insiders estimate that since 2007, revenue for most adult production and distribution companies has declined 30% to 50% and the number of new films made has fallen sharply. Fri, 07 Aug 2009 11:07:00.

Don't Blame Your Community: Ad Blocking Is Not Killing Any Sites. Every so often we hear about a random blog or website that freaks out and claims that ad blockers are "stealing" or somehow damaging websites. 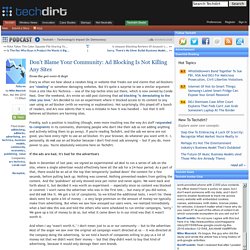 But it's quite a surprise to see a similar argument from a site like Ars Technica -- one of the top techie sites out there, which is now owned by Conde Nast. Over the weekend, Ars wrote an odd post claiming that ad blocking "is devastating to the sites you love. " Ars decided to run an experiment where it blocked access to its content to any user using an ad blocker (with no warning or explanation). Not surprisingly, this pissed off a bunch of readers, and Ars now admits that it was a mistake in how it was handled -- but that it still believes ad blockers are harming sites.

Frankly, such a position is insulting (though, even more insulting was the way Ars staff responded to complaints in its comments, dismissing people who don't like their ads as not adding anything and actively telling them to go away). Advertising that works, not annoys. More Evidence There’s No Bubble: VC Investments Were Flat in Q2. Dow Jones VentureSource released its second quarter numbers for the venture industry today, and there’s a reason they’re not dominating the headlines. 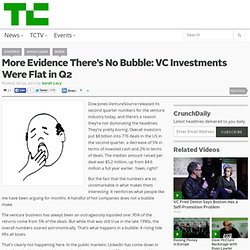 They’re pretty boring: Overall investors put $8 billion into 776 deals in the US in the second quarter, a decrease of 5% in terms of invested cash and 2% in terms of deals. The median amount raised per deal was $5.2 million, up from $4.6 million a full year earlier. Yawn, right? But the fact that the numbers are so unremarkable is what makes them interesting. It reinforces what people like me have been arguing for months: A handful of hot companies does not a bubble make. The venture business has always been an outrageously lopsided one: 95% of the returns come from 5% of the deals. Why Ad Blocking is devastating to the sites you love. Did you know that blocking ads truly hurts the websites you visit? 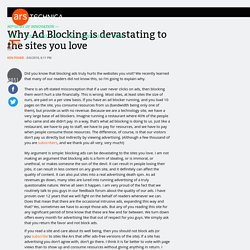 We recently learned that many of our readers did not know this, so I'm going to explain why. There is an oft-stated misconception that if a user never clicks on ads, then blocking them won't hurt a site financially. This is wrong. Most sites, at least sites the size of ours, are paid on a per view basis. If you have an ad blocker running, and you load 10 pages on the site, you consume resources from us (bandwidth being only one of them), but provide us with no revenue. My argument is simple: blocking ads can be devastating to the sites you love. If you read a site and care about its well being, then you should not block ads (or you subscribe to sites like Ars that offer ads-free versions of the site).

Invariably someone always pops into a discussion like this and brings up some analogy with television advertising, radio, or somesuch.