The Wrath Against Khan: Why Some Educators Are Questioning Khan Academy. An Explainer Post There's an article in this month's Wired Magazine about Khan Academy. 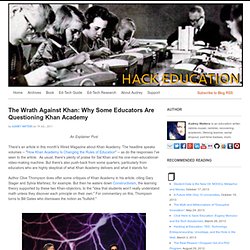 The headline speaks volumes -- "How Khan Academy Is Changing the Rules of Education" -- as do the responses I've seen to the article. As usual, there's plenty of praise for Sal Khan and his one-man-educational-video-making machine. But there's also push-back from some quarters, particularly from educators who are highly skeptical of what Khan Academy delivers and what it stands for. That dichotomy says it all, right? Technology Replacing Teachers If one person can create 2400 educational videos and these videos can in turn be viewed by anyone with an Internet connection then why do we need teachers?

How Khan Academy Is Changing the Rules of Education. Is A College Education Worth The Debt? Www.google.fr/url?sa=t&rct=j&q=&esrc=s&source=web&cd=1&ved=0CCsQFjAA&url=http%3A%2F%2Ftechcrunch.com%2F2011%2F04%2F10%2Fpeter-thiel-were-in-a-bubble-and-its-not-the-internet-its-higher-education%2F&ei=PnRsT_OpJsqf0QWqiozuBg&usg=AFQjCNGV_3hi2iXzLHezUIZDoDj. Fair warning: This article will piss off a lot of you. 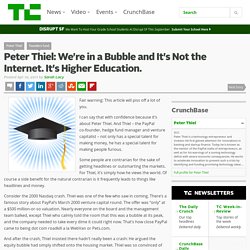 I can say that with confidence because it’s about Peter Thiel. And Thiel – the PayPal co-founder, hedge fund manager and venture capitalist – not only has a special talent for making money, he has a special talent for making people furious. Some people are contrarian for the sake of getting headlines or outsmarting the markets. For Thiel, it’s simply how he views the world. Of course a side benefit for the natural contrarian is it frequently leads to things like headlines and money. Consider the 2000 Nasdaq crash. Gates Urges School Budget Overhauls. The higher-education bubble: More on Peter Thiel. Higher education: The latest bubble? Schumpeter: Declining by degree. Don’t Lecture Me: Rethinking How College Students Learn. Flickr:AllHails At the star-studded Harvard Initiative on Learning and Teaching (HILT) event earlier this month, where professors gathered to discuss innovative strategies for learning and teaching, Harvard’s professor Eric Mazur gave a talk on the benefits of practicing peer instruction in class, rather than the traditional lecture. 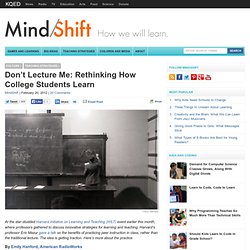 The idea is getting traction. What’s On the Horizon in Higher Education. Big Ideas Culture Digital Tools Teaching Strategies Flickr: Dexterwas How will college life be different in five years than it is today? 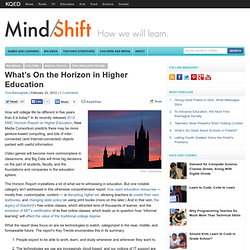 In its recently released 2012 NMC Horizon Report on Higher Education, New Media Consortium predicts there may be more gesture-based computing, and lots of inter-connected (and Internet-connected) objects packed with useful information. Video games will become more commonplace in classrooms, and Big Data will drive big decisions on the part of students, faculty, and the foundations and companies in the education sphere. If School is Not Relevant. Uncategorized. 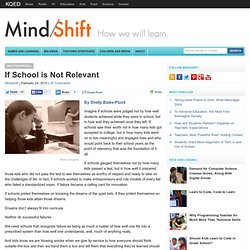 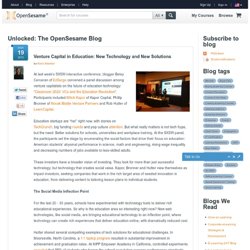 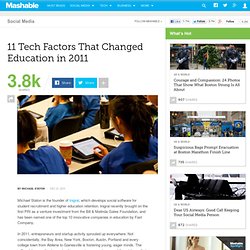 Inigral recently brought on the first PRI as a venture investment from the Bill & Melinda Gates Foundation, and has been named one of the top 10 innovative companies in education by Fast Company. In 2011, entrepreneurs and startup activity sprouted up everywhere. Not coincidentally, the Bay Area, New York, Boston, Austin, Portland and every college town from Abilene to Gainesville is fostering young, eager minds. The millennial generation is proving it can create companies — and thus, jobs — that solve real problems. Trends like these are quickly impacting how young people relate to and absorb education. At Flex Academy, High School Mimics the Workplace. Culture Digital Tools Teaching Strategies Flex Academy By Kyle Palmer Every weekday, Chanel Hines commutes from Walnut Creek across the Bay Bridge to an office building in downtown San Francisco. 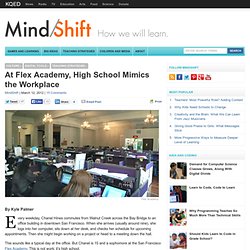 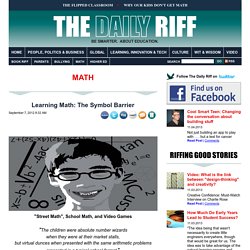 Eric Sheninger: Opening Minds on Social Networking. Don’t ask me. Look it up. March 1, 2012 by mrkaiser208 Surely you remember hearing your own teachers say that. 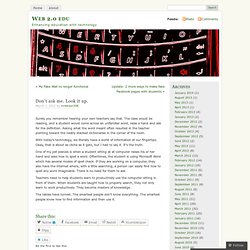 The class would be reading, and a student would come across an unfamiliar word, raise a hand and ask for the definition. Asking what the word meant often resulted in the teacher pointing toward the neatly stacked dictionaries in the corner of the room. 19th, 20th & 21st, Century Education. February 2, 2012 by tomwhitby A personal observation: Back when I began my early education, the year was 1952.

I don’t believe Pre-K even existed back then, so I started my education in Kindergarten. There is no doubt in my mind that in my early education I was exposed to educators who were students of a 19th Century education. Those teachers were teaching content to kids using methods they had learned in the 1800’s. Content back then was more solid and more trustworthy. The pace for 19th Century educators preparing kids for the 20th Century was much slower. The concept of changing things came when the Russians put up Sputnik.

It was time to move out the 19th Century ways, and race to the 20th Century, even though we were over 50 years into it. Waldorf School of the Peninsula: A school without technology. March 20, 2012 by mrkaiser208 A recent story on CNN Student news mentioned a school that did not use technology as a mode of learning. The school is the Waldorf School of the Peninsula in Los Altos, California which is located in the heart of the Silicon Valley. How can we improve education for all? NOTICE: This domain name expired on 09/19/2012 and is pending renewal or deletion. Share this .COM deal with friends! Over 53 million domains registered. Copyright © 1999-2012 GoDaddy.com, LLC. All rights reserved. *One FREE .COM, .CO, .NET or .ORG with purchase of a new 12-, 24- or 36-month website builder plan.

Sugata Mitra: The child-driven education. Google Earth: 1 Billion Downloads and So Many Uses in the Classroom. Google Earth was one of the very first pieces of software that I began to create educational resources with. As I put it in one of my first ever blog posts 5 years ago: ”This app won me over straight away.” The engaging environment really struck a chord with me and I remember fondly my first forays into using it to support learning. It has developed so much over the years – I remember using it for a Geotweets lesson, when we had to track down people replying to us on Twitter and find their exact location in Google Earth. It feels like a true Autumnal day today in England – despite the temperature anomaly we had just recently – which again reminds me of one of the first resources that I thought was truly magical from the Forestry Commission here in the UK.

10,000 Young People: Designing the Future. How Do We Change A Cultural Fascination With Grades? With over 100 responses this short straw poll indicates that it is not the lack of time or issues around timetabling that make this process a challenge, but a cultural focus on levels and grades. 58% of those who responded felt that it was this single factor that was influenced assessment implementation within schools.

Hide&Seek - Inventing new kinds of play. Sal Khan On 60 Minutes. Sanjay Gupta, introducing Khan Academy: Take a moment and remember your favorite teacher. Now imagine that teacher could reach, not thirty kids in a classroom, but millions of students all over the world. That's exactly what Sal Khan is doing on his website Khan Academy. Arthur Benjamin's formula for changing math education.