Plant Life - Taiga. Taiga Plant Species and Adaptations. Earth Floor: Biomes. Taiga: Plants Because the climate of the taiga is very cold, there is not a large variety of plant life. 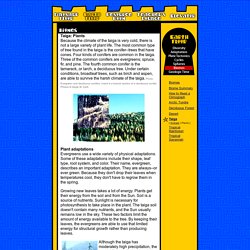 The most common type of tree found in the taiga is the conifer--trees that have cones. Four kinds of conifers are common in the taiga. Three of the common conifers are evergreens; spruce, fir, and pine. The fourth common conifer is the tamarack, or larch, a deciduous tree. Under certain conditions, broadleaf trees, such as birch and aspen, are able to survive the harsh climate of the taiga. Plant adaptations Evergreens use a wide variety of physical adaptations. Growing new leaves takes a lot of energy. 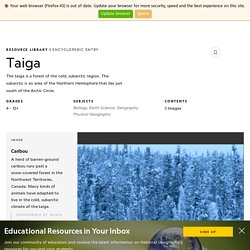 The subarctic is an area of the Northern Hemisphere that lies just south of the Arctic Circle. The taiga lies between the tundra to the north and temperate forests to the south. Alaska, Canada, Scandinavia, and Siberia have taigas. In Russia, the world’s largest taiga stretches about 5,800 kilometers (3,600 miles), from the Pacific Ocean to the Ural Mountains.

This taiga region was completely glaciated, or covered by glaciers, during the last ice age. The soil beneath the taiga often contains permafrost—a layer of permanently frozen soil. Plants and Fungi Taigas are thick forests. Taiga biome. Google Image Result for. View more. 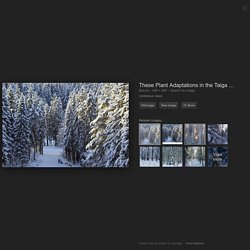 Taiga Climate. High and Low Temperatures. Climate. Taiga in the Winter. Taiga weather patterns and climate. Snow Covered Mountain. Temperature and Precipitation over the seasons. Taiga in the summer. Taiga Animals. Untitled. Untitled. Wildlife of the Taiga Shield Ecozone. One of the most spectacular wildlife displays in the Taiga Shield is the explosive return of ducks, loons, geese, and swans during the spring migration. 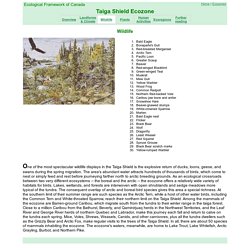 The area's abundant water attracts hundreds of thousands of birds, which come to nest or simply feed and rest before journeying farther north to arctic breeding grounds. As an ecological crossroads between two very different ecosystems -- the boreal and the arctic -- the ecozone offers a relatively wide variety of habitats for birds. Lakes, wetlands, and forests are interwoven with open shrublands and sedge meadows more typical of the tundra. The consequent overlap of arctic and boreal bird species gives this area a special richness. At the southern limit of their summer range are such species as the Arctic Tern, while a host of other water birds, including the Common Tern and White-throated Sparrow, reach their northern limit on the Taiga Shield.

Untitled. Earth Floor: Biomes. Taiga: Animals The cold climate of the taiga prevents many animals from living there year-round. 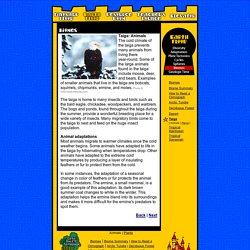 Some of the large animals found in the taiga include moose, deer, and bears. Examples of smaller animals that live in the taiga are bobcats, squirrels, chipmunks, ermine, and moles. Photo © 2000-www.arttoday.com The taiga is home to many insects and birds such as the bald eagle, chickadee, woodpeckers, and warblers. The bogs and ponds, found throughout the taiga during the summer, provide a wonderful breeding place for a wide variety of insects. Animal adaptations Most animals migrate to warmer climates once the cold weather begins. In some instances, the adaptation of a seasonal change in color of feathers or fur protects the animal from its predators.

Back | Next. Untitled. Untitled. Animals of the taiga. Mammals living in the taiga include foxes, lynxes, bears, minks, squirrels, while larger ones include grey wolves and their preys: caribou, reindeers and moose. 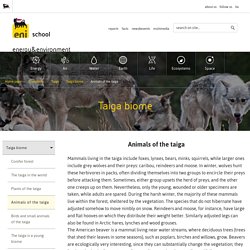 In winter, wolves hunt these herbivores in packs, often dividing themselves into two groups to encircle their preys before attacking them. Sometimes, either group upsets the herd of preys, and the other one creeps up on them. Nevertheless, only the young, wounded or older specimens are taken, while adults are spared. During the harsh winter, the majority of these mammals live within the forest, sheltered by the vegetation. The species that do not hibernate have adjusted somehow to move nimbly on snow.