Visualizing What COVID-19 Does to Your Body - Visual Capitalist. View the high-resolution of the infographic by clicking here. 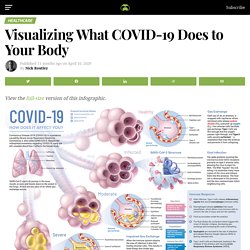 To vaccinate, or not to vaccinate? That is the question. In order to achieve herd immunity against COVID-19, some experts believe that between 70% to 80% of a population must be vaccinated. But attitudes towards these vaccines are undoubtedly mixed. In fact, it’s estimated that one-third of people globally have some major concerns. Using survey data from eight different countries, Global Web Index created five archetypes to help illustrate how typical attitudes towards vaccines differ depending on a range of factors, such as age, income, lifestyle, and values. Countries surveyed: United States, Germany, United Kingdom, Brazil, China, India, Japan, and Italy. Which segment are you most likely to fall under, according to these segments? Vaccine Supporters [People who say they will get the COVID-19 vaccine.] 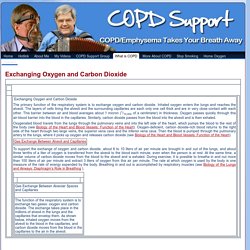 Inhaled oxygen enters the lungs and reaches the alveoli. The layers of cells lining the alveoli and the surrounding capillaries are each only one cell thick and are in very close contact with each other. This barrier between air and blood averages about 1 micron (1/10,000 of a centimeter) in thickness. Oxygen passes quickly through this air-blood barrier into the blood in the capillaries. The Structure, Function, and Disorders of Bronchioles. The bronchioles are an important part of the respiratory system. 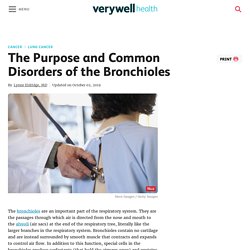 They are the passages through which air is directed from the nose and mouth to the alveoli (air sacs) at the end of the respiratory tree, literally like the larger branches in the respiratory system. Bronchioles contain no cartilage and are instead surrounded by smooth muscle that contracts and expands to control air flow.

In addition to this function, special cells in the bronchioles produce surfactants (that hold the airways open) and proteins that break down toxins that enter the lungs. Disorders such as bronchiolitis, asthma, and bronchiolitis obliterans involve these passageways. Structure of the Bronchioles As air is inhaled, it is drawn into the trachea and enters the main bronchus. The bronchioles are divided into three types, each becoming progressively smaller: Lobular bronchioles (larger lobes)Terminal bronchioles (think terminals for transfer)Respiratory bronchioles (responsible for directing air to the alveoli)

Diaphragm: Anatomy, Function, Diagram, Conditions, and Symptoms. The diaphragm is the primary muscle used in respiration, which is the process of breathing. 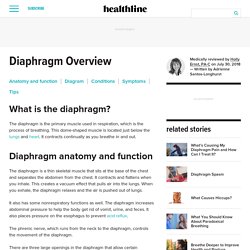 This dome-shaped muscle is located just below the lungs and heart. It contracts continually as you breathe in and out. The diaphragm is a thin skeletal muscle that sits at the base of the chest and separates the abdomen from the chest. It contracts and flattens when you inhale. This creates a vacuum effect that pulls air into the lungs. It also has some nonrespiratory functions as well. The Respiratory System - Structure And Function. Respiratory System: Facts, Function and Diseases. The human respiratory system is a series of organs responsible for taking in oxygen and expelling carbon dioxide. 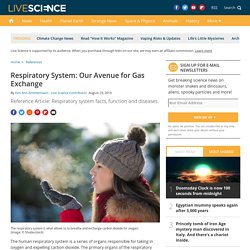 The primary organs of the respiratory system are the lungs, which carry out this exchange of gases as we breathe. The lungs work with the circulatory system to pump oxygen-rich blood to all cells in the body. The blood then collects carbon dioxide and other waste products and transports them back to the lungs, where they're pumped out of the body when we exhale, according to the American Lung Association. The human body needs oxygen to sustain itself. After only about five minutes without oxygen, brain cells begin dying, according to the National Institute of Neurological Disorders and Stroke, which can lead to brain damage and ultimately death.

Pneumonia: Causes, Symptoms and Treatment. Pneumonia is a broad term for a common lung infection typically caused by bacteria or viruses. 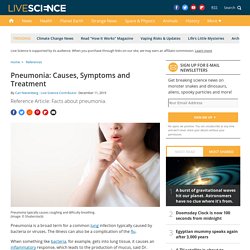 The illness can also be a complication of the flu. When something like bacteria, for example, gets into lung tissue, it causes an inflammatory response, which leads to the production of mucus, said Dr. Maureen Dziura, a lung specialist at Tufts Medical Center in Boston. An accumulation of mucus can trigger some symptoms of pneumonia, such as a cough, shortness of breath, fever and chills, she said. The illness can be mild, which is known as walking pneumonia, or it can be serious if the symptoms are severe, and may require hospitalization, Dziura said. With pneumonia, the alveoli, or air sacs, in one or both lungs become inflamed and fill with fluid. More than 250,000 people have to seek care in a hospital for pneumonia each year in the United States, and about 50,000 Americans die annually from it, according to the Centers for Disease Control and Prevention (CDC).