Topic 2: Exercise Physiology - IB. Physical Educ8or: IB SEHS: Respiratory System. The Process of Breathing - Anatomy & Physiology - OpenStax CNX. Respiratory System: Sleep Apnea Sleep apnea is a chronic disorder that can occur in children or adults, and is characterized by the cessation of breathing during sleep. 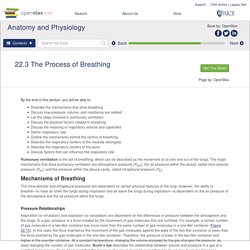 These episodes may last for several seconds or several minutes, and may differ in the frequency with which they are experienced. Sleep apnea leads to poor sleep, which is reflected in the symptoms of fatigue, evening napping, irritability, memory problems, and morning headaches. In addition, many individuals with sleep apnea experience a dry throat in the morning after waking from sleep, which may be due to excessive snoring. There are two types of sleep apnea: obstructive sleep apnea and central sleep apnea. Breathing mechanism & Gas Exchange (IB) Gas exchange - Health Video: MedlinePlus Medical Encyclopedia. Lung Volumes and Capacities EXPLAINED UNDER 5 MINUTES!!!! Larynx – Superior (From Above) View. [Continued from above] . . . pharynx (upper part of the air passages) and the trachea (windpipe), and forms part of a tube in the throat that carries air to and from the lungs. 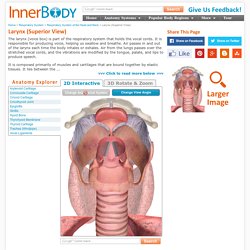 It consists of areas of tough, flexible tissue called cartilage, which sticks out at the front of the throat to form the Adam's apple. Below this, connecting the thyroid cartilage to the trachea is another cartilage that is shaped like a signet ring with the seal at the back of it. Just on top of this seal are two pyramid-shaped cartilages, and between these two cartilages and the inner surface of the Adam's apple stretch two fibrous sheets of tissue, called the vocal cords, which are responsible for voice production. The Respiratory System. Pulmonary Ventilation. Science - Respiratory System. Respiratory system physiology. Oxygen movement from alveoli to capillaries. Gas Exchange across the Alveoli. Fick Priciple Oveview. VO2 Max Test - What to Expect. The Beep Test. The Beep Test Calculator will be online soon in the meantime you can use our chart below. 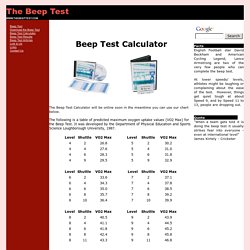 The following is a table of predicted maximum oxygen uptake values (VO2 Max) for the Beep Test. It was developed by the Department of Physical Education and Sports Science Loughborough University, 1987. The following journals and books contain more information on the Beep Test: Leger, L.A. & Lambert, J. (1982) "A maximal multistage 20m shuttle run test to predict VO2 max", European Journal of Applied Physiology, Vol 49, p1-5. © COPYRIGHT 2006 ALL RIGHTS RESERVED THEBEEPTEST.COM - Download the Beep Test Facts English Football star David Beckham and American Cycling Legend, Lance Armstrong are two of the very few people who can complete the beep test. At lower speeds/ levels, athletes might be laughing or complaining about the ease of the test. Quote "When a team gets told it is doing the beep test it usually strikes fear into everyone - even at international level" James Kirtely - Cricketer.

Multistage Fitness Test or Bleep Test. Testing and measurement are the means of collecting information upon which subsequent performance evaluations and decisions are made but, in the analysis, we need to bear in mind the factors that may influence the results. 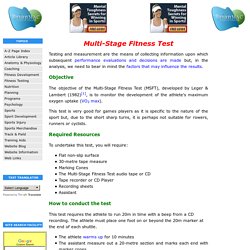 Objective The objective of the Multi-Stage Fitness Test (MSFT), developed by Leger & Lambert (1982)[1], is to monitor the development of the athlete's maximum oxygen uptake (VO2 max). This test is very good for games players as it is specific to the nature of the sport but, due to the short sharp turns, it is perhaps not suitable for rowers, runners or cyclists. Required Resources To undertake this test, you will require: Flat non-slip surface 30-metre tape measure Marking Cones The Multi-Stage Fitness Test audio tape or CD Tape recorder or CD Player Recording sheets Assistant.

Cooper Test - 12 minute run to assess your vo2max. Testing and measurement are the means of collecting information upon which subsequent performance evaluations and decisions are made. 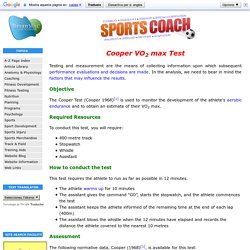 In the analysis, we need to bear in mind the factors that may influence the results. Objective. Spirometry guide. SOP Performing a lung dissection 0. Effects of Recovery Postures... Hands on heads or hands on knees? Athletes of all levels, from novice to elite, are constantly looking for strategies to decrease time to recover and boost athletic performance. 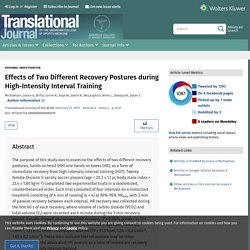 It is well known that the respiratory system plays a crucial role during rest and exercise via buffering metabolic by-products, such as hydrogen ions (H+) and carbon dioxide (CO2), to maintain the acid–base homeostasis and minimizing dysregulation of the excitation–contraction coupling process in localized muscle tissue (1). Failure to maintain this acid–base homeostasis during exercise can have detrimental effects on performance (2) and often arises when the respiratory system lacks the ability to increase alveolar ventilation, or exercise-induced diaphragmatic fatigue sets (3). Thus, increasing ventilation could subsequently lead to an increase in tidal volume (VT), a conservation of respiratory rate, and a more efficient work of breathing. Experimental Approach to the Problem Subjects Screening Familiarization and Testing Statistical Analysis 1.